How Lowellites are managing time with the new bell schedule 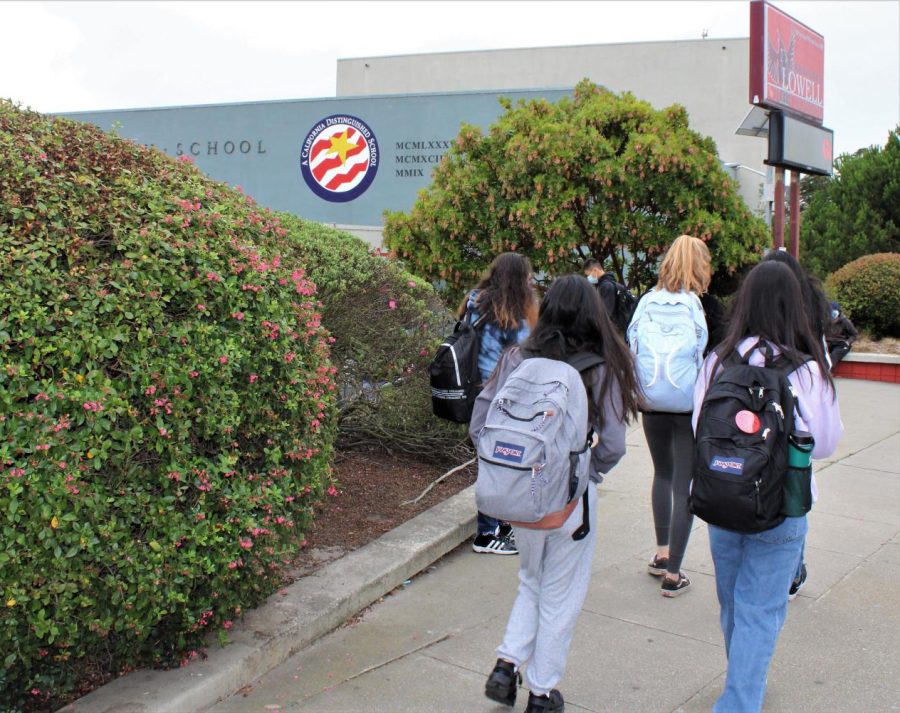 When senior Isabella Jones received her work schedule for the school year, she initially didn’t have any problems with it. Assuming that her school day would end at 3:35 p.m. like in previous years, Jones would have just enough time to get to her 4:15 p.m. shift. Or so she thought. Upon receiving the back-to-school newsletter, Jones was dismayed by what she read. School was now going to end at 4:00 p.m., which would make getting to work on time nearly impossible.

Lowell’s bell schedule was changed this school year to adhere to new state mandates that require later start times for public schools. While the changes don’t seem drastic on paper, they have left students scrambling to balance work, extracurriculars, academics, and rest into their lives. Some after-school commitments have also had to adjust their times to meet the demands of the new bell schedule.

In October of 2019, Governor Gavin Newsom signed SB 328 into law. It requires all California public high schools to start the school day no earlier than 8:30 a.m. While the schools don’t officially have to change their start times until July of 2022, the San Francisco Unified School District (SFUSD) decided to implement the change this year. This bill was made based on medical research, which says that giving teenagers more time to sleep improves physical health and academic performance.

Abiding by this new law, Principal Joe Dominguez and other Lowell administrators started the process of reconfiguring Lowell’s bell schedule. To keep a sense of normalcy for students, Dominguez tried to mirror the pre-COVID schedule as closely as he could. Drafting the new schedule took multiple weeks to complete, with Dominguez even pushing for a 3:20 p.m. dismissal time. However, many of his proposals did not meet the State’s instructional minute requirements, which stands unchanged at 64,800 minutes a year for Lowell and other California public high schools. Although the school day could technically begin at 8:30 a.m. and still fall under the state restrictions, SFUSD decided to mandate a high school start time of 8:40 a.m.

Other methods of shortening the school day were also considered, such as creating one school-wide lunch block. While this could cut down the length of the school day, Dominguez explained that due to social distancing guidelines, the size of Lowell’s student population doesn’t allow for a unified lunch block. However, Dominguez also acknowledges that with reduced COVID rates, future lunch schedules could be modified. “I think having one lunch period is very attainable,” Dominguez says. “If that’s feasible, we could cut maybe at least an hour.”

Contradicting the original purpose of the bill, which was to give students more sleep, some Lowell students are still starting the day early. Lowellites who have opted to have a zero period, which enables them to take a seventh class, begin school at 7:40 a.m. Although SB 328 bans high schools from starting before 8:30 a.m., this additional block doesn’t violate the bill because student participation is voluntary. While Dominguez supports students having the ability to take a seventh class, he also recognizes the way it nullifies the bill. “Unfortunately, students that are voluntarily taking a zero block aren’t reaping the benefits [of getting more sleep],” he said. “I don’t know if the state is going to get what they are hoping for. I’m hoping that with more time, next year we can figure out a better way to do it.”

While many students utilize zero period to take a seventh class, other students have to take an early morning class to get to their after-school commitments. For instance, Jones needed seventh block off to make her 4:15 p.m. work shift, which meant she had to switch to a zero period. The new bell schedule gives her little choice other than to take the optional block, so Jones is unsure that the law’s intent for extra sleep will be achieved. “With my course load, I’ll probably be working until like midnight,” Jones said. “And now I have to wake up really early.”

To cater to Lowell’s new dismissal time, the start time of some extracurricular activities have also been pushed back, leading to concerns about balancing schoolwork. Junior Ruby Recht-Appel, a member of the San Francisco Girls Chorus, now has rehearsals for the chorus from 5:00 p.m. to 7:30 p.m on Tuesdays and 5:00 p.m. to 8 p.m. on Fridays. Previously starting at 4:30 p.m., rehearsals have been moved back to allow students enough time to commute downtown. Recht-Appel is worried about this rearrangement — because rehearsal starts later, she will have significantly less time to complete her homework and get quality sleep. She thinks this is especially difficult after over a year of distance learning. Compared to 35 minute Zoom classes that started at 9 a.m., students are experiencing a four- to five-hour increase in the school day. “With it being such a long day, it’s harder to stay focused and get back into the rhythm of being in school,” Recht-Appel said.

As valuable as SB 328 may be for many California students, the change to the bell schedule has not been an easy adjustment for some Lowellites. While a later start gives some students more time to sleep, students like Jones who require a zero period are waking up earlier and staying up later anyway.