Back in the arena: Will Lowell’s traditional system prevail? 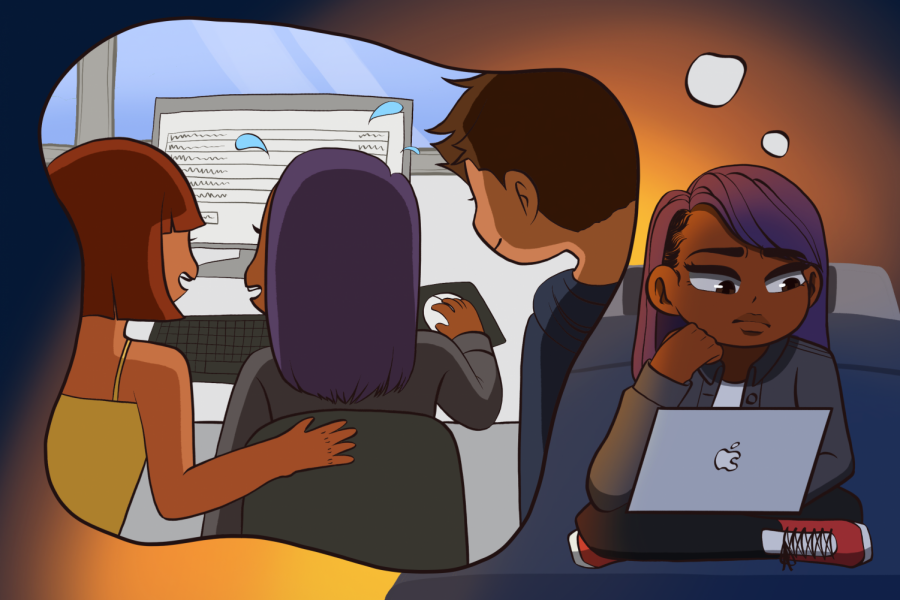 It’s the end of April 2019, the week of junior Joanna Lam’s first Arena, and she is observing the school environment around her. Tension builds as students consult with their friends and any upperclassmen who will spare them advice on classes and teachers. “Don’t talk to me during this time slot,” she hears people tell each other as those around her set up their computers and anxiously wait for the page in front of them to reload and the fate of their upcoming year to be decided.

Now, it is April 2021 and Joanna Lam sits at home, doing online classes and getting ready to do course selection with no knowledge of what the Arena process will look like. As she sits at her computer, she wonders if a tradition so specific to Lowell will be unavailable.

To Lam and many other Lowell students, one aspect of Lowell that makes it unique to the other public high schools throughout the city is the ability for students to choose their own classes, teachers, and time schedules. For many years, this has been done through the course selection and Arena system, in which students choose their courses, administration then uses that data to assign offered sections, and a few weeks later, students choose available teachers and blocks depending on what time slot, or “pick,” they are given. But with remote learning and uncertainty surrounding when we will go back to school significantly changing this year’s process, the future of Arena remains unclear.

This system is, to many students, a vital piece of what makes Lowell stand out from other schools. With 62.2 percent of students reporting that they like the traditional Arena system in a survey of 127 run by The Lowell in April of this year, it is clear that the system is important to the community both online and in-person. One responder to the survey appreciated the way that choosing classes prepares us for college scheduling and how unique the system is to Lowell. “Lowell’s Arena process is what makes Lowell, Lowell,” they said.

While the administration tries to determine the status of our next Arena, they are limited by the same big question as last year: What type of schedule should we be planning for? According to Assistant principal Joe Ryan Dominguez, the administrator in charge of Arena, the lack of clarity on what school will look like – the length of the school day, whether we’ll have asynchronous or synchronous classes, and the possibility of students staying in the same groups throughout the day – prevents administration from creating teacher schedules, and in turn allowing students to choose from those schedules.

To prepare for various possible outcomes, Dominguez and the rest of Lowell’s administration created a new system in which students do course selection for the entire 2021-2022 school year through Synergy and use a separate form to request additional information like a 7th course, 8th block release, and teacher requests. According to Dominguez, this system was created, in theory, to allow the creation of schedules that students are somewhat in control of, even if they don’t have a formal Arena. While it is not completely clear how these requests will be utilized, he says that they will give the administration input on what students want without creating a false guarantee for a certain schedule. “Students will always have choice in what classes they take,” he said, “But the level of choice after that — class period or which teacher you get — those details are where we may need to be flexible.”

But those latter details of class periods and teacher choices are not insignificant to many Lowell students. In the survey conducted by The Lowell, 54.3 percent of respondents reported the ability to take seven classes as being a priority. Sophomore Caldwell Kinoshita says that teacher choice is just as important to him as class choice, as the two tend to go hand-in-hand. While these aspects of the Arena are very important to many students, administration may need to make compromises that will eliminate or significantly alter them.

Based on student reaction and the lack of follow up from administration, the new system went over generally smoothly, despite a few system errors. Administration issued emails to students regarding inaccurate course information and encouraged students to ask questions in the Q&A section of the Course Options Document. Junior Amelia Balas did both the Synergy course selection and the separate form for teacher choices and felt hopeful about the process. “To my knowledge, I was able to get the classes I wanted and it made me really excited for next year,”  they said.

According to Dominguez, student opinion has been very crucial for Lowell administration’s decisions regarding schedule picking. In conversations with Dominguez, several student organizations, including the Lowell Student Association and numerous cultural clubs, conveyed to him that their order of importance for schedule choosing is as follows: the ability to choose courses, the ability to take seven classes, and lastly the ability to choose teachers. This list became the foundation of priorities for the 2021 Synergy- and Google Form-based course selection process, though there is no guarantee students will be able to take seven classes or get the teachers they want. Lam, a member of the LSA, feels that this process of meeting with clubs was the best administration could do given the parameters to incorporate student voices into the process.

The uncertainty surrounding Arena has forced the community to open themselves to new solutions and be patient. Dominguez, like many students, is feeling frustrated with the uncertainty. “We all have to be flexible, I don’t know the answers yet,” he said. “It’s not going to be what we’re used to.” Despite the unpredictability and the extra complications from this year, a feeling of excitement and hopefulness is in the air as the Lowell community looks forward to some kind of normalcy in the future. “No matter what Arena looks like, I’m just really excited to potentially go back and take those classes in person,” Balas said.