How I learned to stop worrying and love virtual Shakespeare 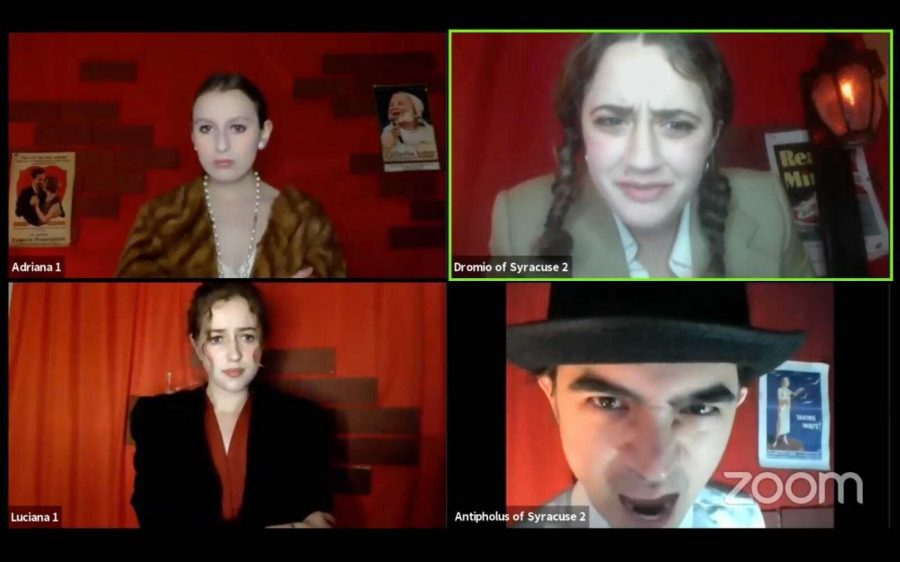 This was my feeling when I first learned that, as a student in Advanced Drama, I would be participating in a virtual live play.

From the first week of high school, theater has been an integral part of my experience at Lowell. As a timid freshman I quickly became enveloped in the drama community, where I made friends and found confidence in myself. Rehearsing for Lowell plays put a little bounce in my step as I walked down the school hallways to get from one class to another — something to care about and look forward to at the end of the school day.

When COVID-19 hit and lockdowns began, theaters around the country closed and a whole sector of life shut down. The student-run play I was supposed to be in got cancelled, as well as the school’s Spring musical, which was a week out from opening night — a huge disappointment to many of my friends. And then, as COVID-19 refused to go away and school shutdowns continued to extend indefinitely into the next school year, the chances of presenting an in-person play disappeared completely.

So when my advanced drama teacher, Terry Bamberger, announced last semester that we were going to put on a play, I was surprised. We would be doing Shakespeare’s Comedy of Errors, a play about mistaken identity that is deliberately confusing. And we would be doing it partly in silent movie style. Over Zoom.

Although part of me was excited at this new experiment, I was also immediately dubious about our ability to pull it off and recreate the theater experience. The risks began to pile up in my mind. Someone’s WiFi could crash mid-scene. Someone’s Zoom app or computer might decide to sabotage their camera or microphone (during rehearsals we had one actor whose zoom box occasionally turned neon green). The audience might just be thoroughly confused. In my mind a virtual play seemed to hold all the drawbacks of theater, without its benefits. We were still stuck with long hours, repetition, the possibility of something going wrong, and the risks of putting ourselves out there and opening ourselves to ridicule. But the magic of being able to connect with the audience and the other actors, or the thrill of the physical stage, seemed to be gone.

Despite my personal doubts, plans moved forward. At the end of September, we were assigned our characters and proceeded to begin rehearsing on Zoom both during class and after school on select days. At first, rehearsals only went for about half an hour, but after a month, they started getting longer and happening more often. I’d sit in my chair, eyes starting to ache from staring at a screen all day, and think about the school work piling up for that evening. And I’d worry that after all the time and effort put into the show, the audience would be too confused to appreciate it.

The first steps toward salvation began with the technical theater department. They went all out on the show, making props, gluing bricks onto large swaths of red cloth for backgrounds, and putting together transition slides to screen share between scenes. The tech students had pulled through to create similar backgrounds and props that brought us actors into the same world over Zoom. The one thing that was missing for me was the anticipation of a real show –– the excitement, nervousness, and, most significantly, the energy. It still didn’t feel real.

As we started our dress rehearsals right before the show dates, something changed. For what felt like the hundredth time, I stood in my familiar spot in front of my computer, which sat atop a pile of ten books to get the right height, the camera reflecting the red cloth and brick background standing behind me. I twisted my red dress in my fingers and smoothed down my long, black velvety coat before reaching forward to turn on my microphone and say one of my lines.

I had a flashback to the days before, when actors would rush around backstage, frantically putting on costumes and makeup in the choir room, or chatting more leisurely than we had time for, before heading into the Carol Channing Theater to test the microphones we would be using. Now, similarly, we were going through mic and camera checks, to make sure everything was working, and it suddenly felt like a real show. The energy of my castmates began flowing over Zoom as we prepared for our performance. As we sat in a breakout room all together, warming up for rehearsal and chatting, we shared together in this moment of preparation for a show we had spent months preparing for. For half an hour we shared tongue twisters, shouted out a shakedown, and just talked with each other. I felt excited and nervous, and like I was part of something. I felt like I had found the drama community again.

Theater was something that I was sure the pandemic would take away. It’s hard to connect with people over Zoom, and even harder to muster up the energy to perform to a computer after a whole day of staring at screens, but we managed to pull it off. And after the show, instead of hugging my fellow actors backstage, we congratulated each other over text. Instead of stepping out after changing to greet audience members, I read the reactions that poured in over the Youtube live stream chat, full of clapping emojis and “bravos” with many exclamation points. Performing over Zoom certainly isn’t the same as performing in-person, but it provided an amazing opportunity to keep up a tradition that has been a central part of my high school experience. Not only that, but through it I got to partake in this great cultural moment of theater experimentation online, and of Shakespeare coming alive in this strange and different way over Zoom.

I approached this show with reluctance and doubt, afraid of taking a chance with the unknown. But through it I gained a rediscovery of theater, of enjoying and engaging in something that I’m passionate about in a new format. This has been a hard year, but this show showed me that the good things are still there if I just open myself up to them.