Lowellites reflect on a year in quarantine 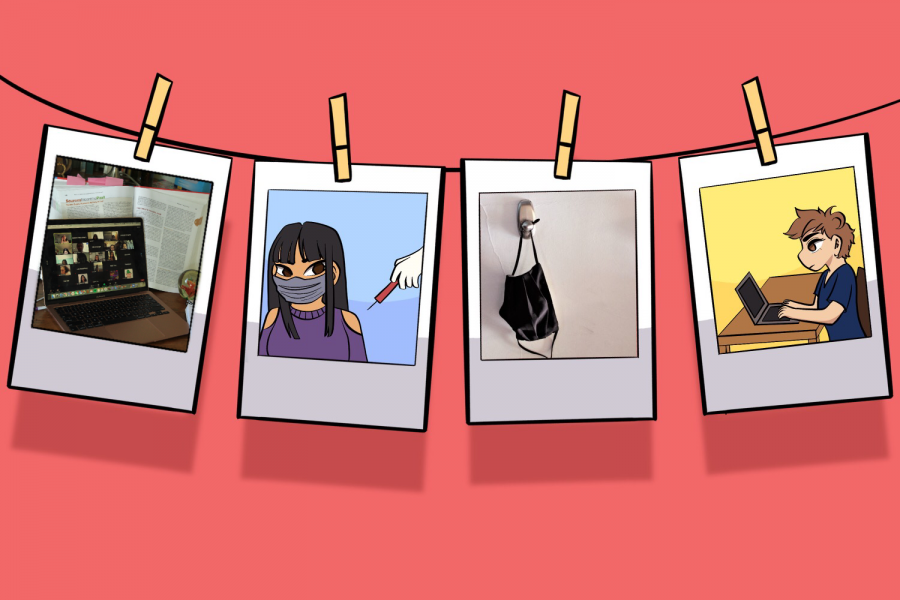 Jaxi Cohen and Marlena Rohde contributed photos to this graphic.

On March 16 2020, San Francisco mayor London Breed announced the city’s Shelter in Place order, first intended to last until April 7 and then extended indefinitely. Monday marked one year spent in quarantine. During this time, we’ve experienced unprecedented changes in our routines, wellbeings, and our outlooks on the future. We’ve lost experiences we were looking forward to and some of us have lost people we love. But we’ve also learned more about ourselves and gained new qualities we can use moving forward. We asked staff members of The Lowell to share how their lives have changed during this past year.
Madeleine Johnston, junior
Quarantine for me has been a generally positive experience. Being alone is not something that scares me, and having the excuse to do so for so long has allowed me to really look in the mirror and face the big things in my life. I have been able to evaluate traumas, find my true passions, and generally understand myself much more thoroughly. Of course it hasn’t done great things for my social life — I worry about how well I will transition back into normal life when that time comes — but I wouldn’t trade personal development and alone time for time with others. The pandemic as a whole is an awful thing and it would be selfish to say that any of it was worth it just for my own personal benefit. But I think there is still good to come out of horrible situations, and being able to slow down during a time where many of us were rarely taking breaths was definitely one of them.
Kelcie Lee, sophomore
Looking back at the person I was a year ago is surreal. It’s almost like I’ve completely changed, but at the same time am the same person. Quarantine led to a lack of social interaction, which resulted in lost contact with the people I used to talk to everyday. At the beginning of quarantine, I lost a lot of motivation, as my extracurriculars were thrown for a loop as some were cancelled and others moved to virtual platforms. I stopped playing competitive volleyball due to the pandemic, which was the core of my 2019-2020 school year. I later realized that we were going to be stuck inside for a much longer time than we anticipated, so I switched my mindset and tried to look at it from a more positive perspective. I was given so much more time to discover new interests and try new things. I’ve gained new interests in mock trial and writing. I met new people virtually, which is something that I would’ve never done if it wasn’t for quarantine. With all the time in isolation, I’ve learned so much more about myself. I’ve gained a newfound appreciation for family, cooking, and biking. Due to the lack of social interactions and travel, I have been able to appreciate these times more as they are scarce. My future is so uncertain now and that’s one thing that quarantine has taught me. Nothing we do is set in stone, and everything is always changing.

Brandon Ng, junior
If there is anything I’ve learned from being in quarantine for a year is that persevering and staying optimistic is such an essential skill in life. I remember hearing about how San Francisco was moving to the least restrictive yellow tier in October and thinking things were getting better. Turns out, that wouldn’t be the case since later on cases surged in California and San Francisco returned to the most restrictive purple tier. Yet, I told myself that it just meant I had to persevere a little longer and that entering the yellow tier again is achievable if I do my part in combating the spread of the COVID-19. That idea gave me something to look towards. Nonetheless, the normal that I knew before March 12th, 2020 won’t return after this pandemic is over. Because of the pandemic, I’ve practically lost a year of doing the activities I normally would be doing. I’ve missed a year of getting boba with my friends and having fun with them. A year to explore the city and travel to other places is gone. And who knows what the new normal will look like? Will masks still be prevalent? When can I gather in large crowds again? Until then, the only thing certain for me is I will keep persevering and looking towards the light at the end of the tunnel.
Roman Fong, freshman
At the beginning of quarantine, I wasn’t concerned about myself or what the world would look like because I assumed we would be out of school for only a couple weeks, but I was in for a big surprise. During quarantine, I lost many things, like the ability to play sports, hang out with friends, an easy transition to high school, and the motivation to perform to my best ability. I recognized these things, but the mental state I was in made me lack the motivation to get better. Eventually, I was able to claw myself out of the hole I dug for myself with the help of my friends and family. Meeting new people from school and seeing my family after so many months opened my eyes to see how meaningful those relationships are. Getting back into playing baseball and music reminded me how happy and free they made me feel. Discovering journalism during distance learning gave me another enjoyable goal and a way to adjust to high school. Now, after a year, I feel like I have a more optimistic outlook on the future, and more importantly, a stronger connection with myself.
Saw Nwe, sophomore
During quarantine, I have more time to reflect on myself, spend time with family, and engage in extracurriculars like school clubs which I would not have been able to do at in-person school since I played sports. Despite not being able to go on runs with my teammates during the pandemic, I found new ways to stay active at home. I usually volunteer at the public library in my free time, but I have not been able to do so during quarantine. Instead, I discovered new interests such as coding, science research, leadership, and journalism. The downside is that I have fewer social interactions with my friends and even when I regularly text my friends, it is not the same or as fulfilling as meeting my friends in person at school. I also feel distant from most classmates because we have not seen each other for almost a year. Nonetheless, I am looking forward to seeing everyone when we can safely return to in-person school again.
Tess Randall, senior
Quarantine’s forced isolation has really allowed me to get to know myself. I know that sounds cheesy, but it’s really true. I started dressing the way I wanted to dress, and I even shaved my head. I started being more outspoken and more comfortable with public speaking, which is something I really struggled with. I became more social and made more friends, too. Quarantine gave me time to reflect and improve my mental health. Ultimately, quarantine just gave me time to learn to like myself.