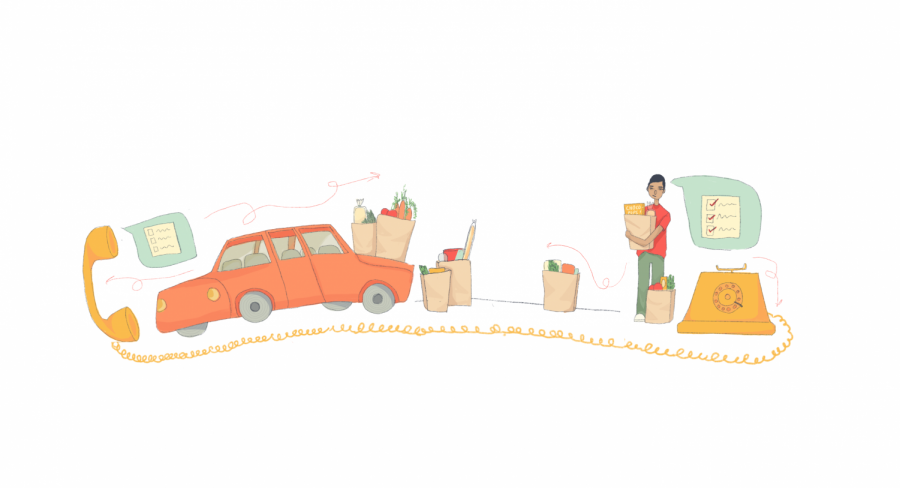 As I dialed the phone number on my screen, I got ready to speak to someone who was probably suffering more than I could imagine. Will they be young or old, will they sound sick or healthy? I wondered all of these things before they picked up the phone. In Spanish, I asked them what essentials they needed, and in a tired voice, they listed out a modest arrangement of a few fruits, vegetables, cereal, and chicken breast. Afterwards, my dad and I went to the grocery store, picking up the groceries that they listed in addition to a few more supplies they hadn’t listed like milk, eggs, and rice. After buying what they needed, we drove to a dilapidated downtown hotel, went up to their room, and dropped off the groceries.

During the summer of 2020, this became a routine for us.

For the majority of that lock-down summer, I didn’t spend my time too productively, and I felt helpless and guilty that I didn’t know what to do to make a difference. The state of the world during the quarantine imbued me with a sense of urgency, and it seemed as if everyday on the news something important or dire was happening. COVID-19 cases were increasing daily, I knew that many were suffering, and essential workers were out there risking their lives every day, but I didn’t know what I could do. I felt that as an insignificant teenager out of the billions of people in the world, any effort I made to impact the world would be pointless.

Finally, in mid July, after around a few months of living aimlessly, I decided to try taking action anyway. My dad had been volunteering through an organization called the Shanti Project, which, in tandem with other non-profit organizations like Meals on Wheels, is contracted out by the city to provide resources for people that need them. His job as a volunteer was to buy emergency groceries with government funding for a few days of sustenance for people in quarantine before long-term food-providing services were able to take over. Watching my dad go out often to volunteer, even after having worked for the whole day, was one of the deciding factors for me to start helping. I felt that if he could volunteer and help people while working, then I could also step up to make a difference instead of being idle at home.

It was a perfect time for me to get involved; as more cases emerged, especially with people who couldn’t speak English, more volunteer workers were needed. Because I grew up speaking Spanish, I translated for people who couldn’t speak English. Though, at first, I was reluctant to talk to strangers on the phone, a few weeks of experience gave me much more confidence, and I began to realize that my anxiety paled in comparison to the hardships they were going through. Volunteering for the Shanti Project has had a big impact on me. One time, we were told to deliver to an elderly man that looked to be around 70 years old. He didn’t sound too clear on the phone, and when we put the groceries in front of his gate to maintain social distancing, he nearly fell down his stairs on the way to pick them up. Moments like that were the ones that really enforced the gravity of isolation and the other effects of COVID-19. There was another time where we delivered the usual groceries to a middle aged woman, and when we handed them to her, she repeatedly said “Thank you” and “God bless you.” This moment really stayed with me because it felt like the delivery that was part of my routine at that point, meant a lot more to her.

As selfish as it may sound, volunteering made me feel like I mattered in a time where I felt like I had no purpose. I felt valued by the many people in need who we were able to help. This gave me the motivation I had needed in those months in quarantine when I felt hopeless. Being able to help people who were in dire situations all around the city on a weekly basis, and receiving the occasional “Thank you” has made me confident that I have made a difference. This difference, however small it has been in the grand scheme of things, has made it easier for me to keep moving forward in my life as well, however bizarre the circumstances may be.