Plugged in, but disconnected: The struggle to learn and reopen 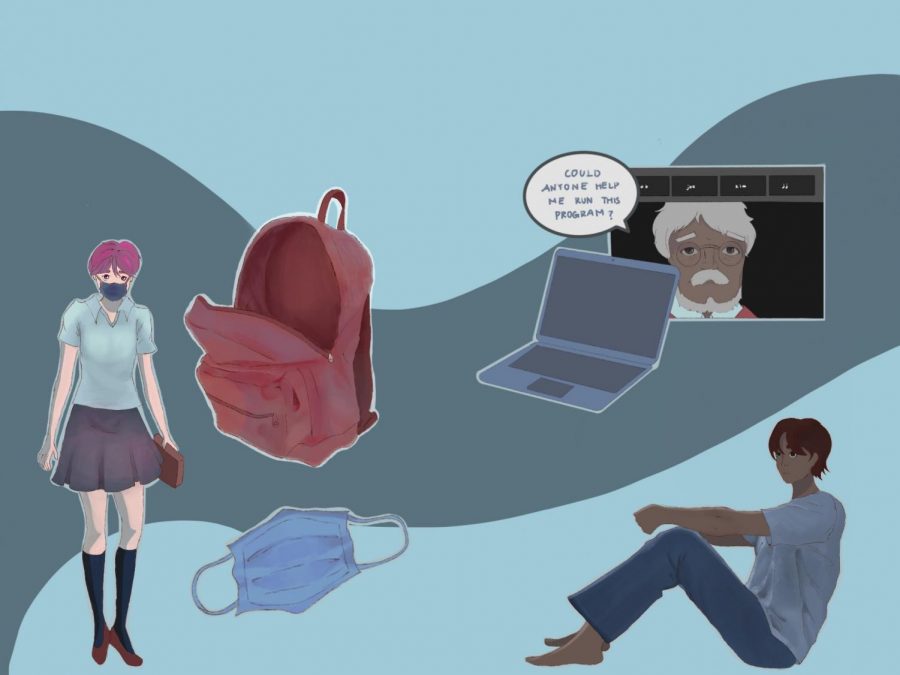 Sophomore Hannah Wissotzky logs onto her Zoom classes to find a sea of silence and black boxes, some with pictures but most with just names. She feels more disconnected from her teachers and peers than she ever has. As Zoom classes turn into asynchronous class periods, she attempts to teach herself the curriculum, all while envious of those able to attend in person school and frustrated with teachers, family, and SFUSD community members over an absence of learning.

Distance learning was something most students had never heard of before March 2020. Now, it is a reality for every San Francisco Unified School District (SFUSD) student. Students as young as four years old struggle to find a stable internet connection, log-on to Zoom calls, and attempt to get an education. People have found themselves asking why SFUSD students remain online while 95 private schools in San Francisco are back in person. There is further uncertainty when it comes to steps forward to ensure a safe return for all students and staff. In a search to find answers to these questions and many like them, people have found others to blame, namely the Board of Education which is taking the necessary steps to reopen public schools.

One issue many SFUSD students are struggling with is the lack of social interaction during online school. Lowell senior Sydney Li finds school to be much less enjoyable, since there is less interaction between students. “A lot of us say the same thing: we want to go back to school, where we want to see our friends, because now we’re just sitting in front of the screen,” Li said. Wissotzky has also found connecting with classmates online difficult. “Nobody talks on Zoom and nobody turns on their cameras,” she said.

Private schools that have returned are reaping the benefits of in-person learning. This includes San Francisco Waldorf School, a K-12 school where Susan Bolich-Giddens teaches, which has been approved to reopen by the San Francisco Department of Public Health (SFDPH). Though she was nervous about returning out of concern for the safety of her students and colleagues, as well as herself, she is elated to be back in the classroom so her students can be in an engaging learning environment. “In terms of meeting my students, seeing them, and being around them, it has been really beautiful and amazing,” Bolich-Giddens said.

On the other hand, SFUSD students and teachers have been struggling to communicate with each other. Lowell sophomore Hannah Wissotzky is frustrated with distance learning because she feels disconnected from teachers. “[Distance learning] has really created a disconnect, it’s like talking to a robot,” Wissotzky said. She explained that it has been hard for her to contact her teachers and has even had teachers not show up to synchronous class periods. “It feels like my teachers have stopped caring,” she said. Li also has had difficulties connecting with her teachers. “Usually when you’re at school, you can directly walk up to [teachers] or schedule an appointment with them, but through distance learning I haven’t really asked them to, because I’m just more comfortable with walking up to them and talking with them in person,” Li said.

SFUSD students have also found themselves in short synchronous classes, which means they have less time with their teacher to learn the same amount of material. Their synchronous instruction time was reduced from 235 minutes per class per week to 105. For Lowell students, times were cut to just 95 minutes after the administration asked teachers to only instruct for 25 minutes on Mondays, when students attend every class synchronously. As a result, some students feel like they aren’t learning as much as they would in person. “I feel like during distance learning it’s really hard to actually learn and you have to spend a lot of hours outside of class self studying,” Li said. Wissotzky echoes Li’s frustrations and feels that changing the schedule to have longer synchronous classes each day would help her learn more.

Returning to school could allow instructional time to increase, like it did for Bolich-Giddeons. Bolich-Giddens’s lesson time was slashed to 30 minutes a day online, but after returning it was moved back up to 90 minutes a day. “It is light years apart in terms of time,” Bolich-Giddens said.

However, some teachers have found teaching online an opportunity for them to become better teachers, including Lowell social studies teacher Monty Worth. “Perhaps this is a silver lining, but I feel like I have learned a ton of pedagogy,” Worth said. He has been collaborating with another teacher for his class lectures, and has also found it refreshing to distill his courses down to their fundamentals. “It has forced me to pare down to the bare essentials of what I want to get across,” Worth said. He has also seen an increase in his class engagement. “[My classes are] not the average class, but what we are really seeing…is that students who have the materials are motivated,” he said. There have been several days when his third block class had 100 percent attendance, something he seldom saw when in person.

Even in light of some of the advantages of distance learning, many San Franciscans believe the district needs to prioritize reopening more. During the fall 2020 semester, the Board of Education has held meetings on a variety of topics ranging from renaming schools to returning to school. Many in the SFUSD community have spoken out during Board of Education meetings against the board’s discussion of topics other than the current crisis because they feel they are distractions from the most important issue of reopening. San Francisco Mayor London Breed has also called for the Board of Education to focus more on reopening public schools. “In the midst of this once in a century challenge, to hear that the District is focusing energy and resources on renaming schools — schools that they haven’t even opened — is offensive,” Mayor Breed wrote in a statement released by her office. Worth echoes the mayor’s feelings and community concerns that the Board of Education is moving in the wrong direction. “I think the Lowell [admissions] decision was sort of the stinky cherry on top,” said Worth.

The Board of Education has acknowledged the general frustration with their agendas and perceived priorities, but has not wavered when declaring returning to school the top priority. “With the calls to reopen schools, I feel like there are families that are desperate and we need to listen to them and support them,” said Board of Education commissioner Alison Collins. Though she understands people’s frustrations and acknowledges that there are a lot of flaws with distance learning that the school district needs to address, she believes community understanding and patience is needed to alleviate pressure from the problems everyone is facing. “It is almost like we are shouting over each other as a community; we have the mayor yelling at the school board and we have parents yelling at teachers,” she said.

The Board of Education’s working group is continuing to focus on getting schools reopened, which involves a long bureaucratic process with SFDPH as well as with the state codes. “The SFDPH has laid out some guidelines for things like ventilation, so we are going classroom to classroom looking at things like windows [that ensure proper ventilation],” Collins said. Complying with the regulations that are necessary for reopening is difficult for SFUSD because they lack the funding needed to fix facilities and make them COVID safe. Currently, many SFUSD school sites deal with large crowds of students and deteriorating buildings that do not have the proper equipment required by SFDPH to return — equipment and repairs that are expensive for SFUSD, which is on track to increase the budget deficit to $132 million. According to Collins, making these upgrades is especially difficult to fund as SFUSD has over 100 school sites that have issues waiting to be repaired.

These regulations also prevent the district from overcoming barriers to reopening, like the lack of space for more than a few students in many classrooms. For example, Worth and others think placing elementary schoolers in middle or high schools may be a good solution to get younger students back in the classroom. “I feel like Lakeshore should take over part of Lowell, that way they can spread out more,” Worth said. However, according to Collins, middle school and high school building cannot be used for elementary schools. “We have very strict requirements for what a school has to have,” Collins said. “For example, kindergarteners are not allowed to be in classrooms on the third floor.” Building codes are just one part of the procedural regulations SFUSD will have to follow if they want to open schools for any students.

Even after those regulations are met, SFUSD still has to set up a testing infrastructure, which would be one of the largest systems in the city, and negotiate a return to in-person teaching with the teacher’s union, which has yet to start. Despite all of the procedures SFUSD must go through, Li wants to see at least a hybrid return at some point this year. “I’m really hopeful that at least we’ll be able to go back the last two months,” she said. “I at least want to have graduation.”

Some SFUSD students are getting a semblance of in-person learning through the Community Hubs Initiative, a partnership between several city agencies and organizations to provide in-person learning spaces to students in their own neighborhoods. The initiative has placed a small number of students in makeshift classrooms from which they attend online classes. The hubs provide students with a place to focus during distance learning with wi-fi, snacks and support services. Currently, to gain access to these facilities students and families must be approached by a community organization that has identified them as critically at risk, apply for a spot at one of the hubs, and have the application approved. While helpful, these community hubs only provide in-person learning spaces for a small group of students.

Students and parents have continued to call for the Board of Education to get all students back into the classroom. While Collins does understand and echoes many of the frustrations she has heard, she believes that pointing fingers is limiting progress. “I’m personally pushing this idea that we need to do a better job of listening to one another, especially to those that are different from us,” Collins said. Collins understands that families are desperate for answers, but asks that people have patience with the Board of Education, teachers, and each other. “There has to be some middle ground,” Collins said. “We have to find it together, and we have to do it without tearing each other apart.”

Calls for patience and understanding have not been helpful for students like Wissotzky who want a concrete plan for a return to in person learning or at least an improved distance learning plan. She believes that means students need more support and class time than the current plan offers, a plan which was supposed to be short term. “It feels like everyone is just waiting for [online learning] to be over, but the reality is that it is not going to be over anytime soon, so the district needs to get their sh*t together,” she said.