Students for the soul of our nation 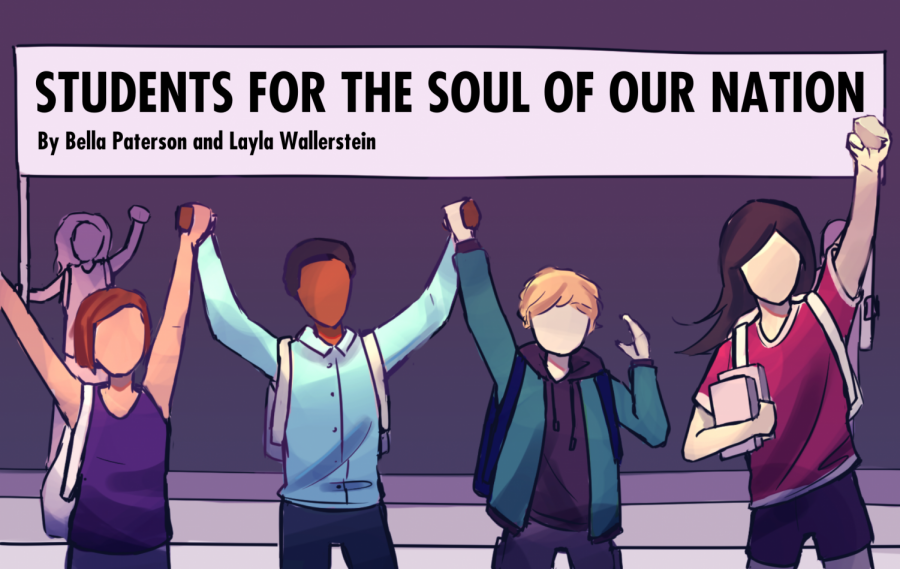 Ember ‘Smudge’ Draffin nervously clicked onto her tablet and checked which state she would be calling today. She ran through the script and then pressed “ready to call.” Her heart rate rose as she waited to be connected to a caller, fortifying herself with reminders of why she needed to phone bank for Democratic candidate Joe Biden, and why the high stakes of this election mattered more than her mounting fear. And then the screen flashed green, a name popped up, and she began talking.

Draffin is just one of many students devoting her time to the upcoming election.

In a deeply progressive place like the Bay Area, students may feel there is little need to get involved in politics. But as the elections draw closer, some are seizing the chance to make a lasting difference. While many are focusing on the momentous presidential election between Democrat Joe Biden and Republican President Donald Trump, other students are putting their time into more local races. Whether it be phone banking, poll working, advocating for a specific policy change, or just challenging a loved one’s way of thinking, these students have found a way to make an impact in the upcoming election.

With wildfires raging in California, the enlivened Movement for Black Lives holding strong, and the nation facing the ramifications of the ongoing pandemic, the stakes for the November election are only rising. In a survey conducted by the publication in September 2020, only 6 percent of Lowell students responded that the election won’t affect them at all, while the majority believes this election will “shape the future of our country.” And an even larger majority believe youth should do something about it. Of the students surveyed, 95 percent believe that it’s either very important or somewhat important for students to get involved in political activism.

However, when students do get involved, the importance and validity of their activism is frequently challenged. With President Trump calling Swedish teen activist Greta Thunberg’s efforts “So ridiculous!,” and young people’s views often getting dismissed as uneducated or naive, it can be easy for youth to feel that their voices don’t matter.

Jackie Fielder, the 26-year-old Indigenous organizer and activist running to represent San Francisco and the larger District 11 in California’s state senate, believes differently. “Student activism is everything,” she said. “Young people are often put in the corner and told to get real. But we know that we are real about these issues, whether it’s police violence or climate change, and we can’t wait any longer.”

Fielder’s campaign relies on student activists for support, from phone-banking to walking precincts. She believes that students on her campaign are motivated by her pledge to reject donations from major corporations, something that sets her far apart from her opponent. And through the strong support they’re putting behind her campaign, these student activists are showing why teens deserve to be taken seriously.

But Fielder understands that however important it is, getting involved can sometimes be challenging. “I know so many people in our movement who have felt disillusioned from politics,” she said. So she believes that it’s crucial to include young people in the conversation. “I think it’s incumbent [upon] campaigns to activate individuals,” she said. “We need to give people hope and we need to give young people a reason to vote.”

Draffin’s hope for a better and more just world has fueled her political action. Politically aware from a young age, she’s watched the last four years of Trump’s presidency unfold with a critical eye, feeling powerless as the president of the United States denigrates women and tramples over social causes that she cares deeply about. Now that she has the chance to make a lasting impact, she’s going all in. Having already registered to become a poll worker for Nov. 3, she’s also making calls to voters around the country to urge them to vote for Biden. “I believe that if we have four more years of Trump, a lot of things will be irreversibly damaged,” Draffin said.

For Draffin, phone banking is a rather simple process, albeit nerve-wracking. After signing in to a website called ThruTalk, she uses a provided script to connect with voters from around the country and convince them either to vote for Biden or, if they’re already doing so, to get their mail-in-ballot and volunteer to help the campaign. Although phone banking is “really scary,” Draffin feels it can also be a very rewarding experience. “When you get someone who’s undecided or who’s a Biden supporter, it just reminds you of why you’re doing it,” she said. “And then everything’s fine, you could do it forever because it’s so much fun.”

Because Draffin is not yet old enough to vote, phone banking is one thing she feels she can and should do to help. “I know that, come whenever we get the results, regardless of whether Trump wins or loses, I’m going to feel really bad if I don’t do everything I can to help make sure that Biden wins,” Draffin said.

Junior Vishal Krishnaiah will also be phone banking in the coming weeks, on top of being a Lowell representative on the SFUSD Student Advisory Council, an organization that represents and presents student interests to policymakers in the school district. He explained that although the pandemic has halted a lot of student efforts towards policy change and advocacy, phone banking is a simple way to help as it is something that can be done from home. By using this method, Krishnaiah also feels like he can make more of a direct influence on the election. “There’s more potential for me to have an impact on people’s opinions and maybe change their mind,” he said. “I think I’m good with words, and understanding political views.”

Like many students his age, Krishnaiah describes the 2016 election as his political awakening. “At the time, I wasn’t really aware of the implications of [Trump’s election]. I knew it mattered but just not how much it mattered or how much damage could be done,” he explained. “The impact of the 2016 election really coincided with the start of high school, as I started to become independent and form my own opinions.”

While phone-banking and poll working are essential for the presidential election, Fielder also encourages students to get involved in their local districts and to pay attention to down-ballot voting, which refers to voting for more local candidates and policies. “There are policies that are invisibly affecting our daily lives every single day,” she said. “I would argue that state level policies have as much an influence on our lives as federal policies, and you can see evidence of that when corporations pay millions of dollars into this [District 11] race and into other races.”

Senior Jessi Yu is one example of this form of local activism encouraged by Fielder. Yu has already been involved in her community, serving as the commissioner of leadership and research on the SFUSD Student Advisory Council. Through this position she connects the school district and student input with the rest of the city. Now with the upcoming election, she will be poll working on Election Day. On top of this, Yu has been using her social media platform to make critical state legislation more understandable.

Yu is currently seeking to spread awareness about the ACA-5 bill, which will be on the California ballot this November. This would allow state agencies and universities to use affirmative action methods — gender and race based consideration — for admission. With the ongoing debate around this issue and how it affects Asian-Americans, Yu thinks it’s critical to clear some things up. “Even in my family, it’s something that’s really hard to explain to my parents,” she said. In the past, her parents have been concerned about affirmative action affecting her chances of getting into certain universities. But she believes, in reality, that’s not the case. “I am really tired of people using affirmative action to pit Asians against all other minorities, instead of letting us support and uplift one another in a white-dominated society,” Yu stated in an Instagram post detailing the bill.

Despite Yu’s efforts to raise awareness on social media, she is wary of the consequences of this tool. “[Social media activism] is really easy to do,” she said. “As easy as it is to spread awareness about something, it’s just as easy to spread misinformation about important issues. So it’s important to be careful about false information.”

While other students engage with strangers for the election, senior Jocelyn Lee has to be an activist in her own home. Her father had voted for Trump in 2016, while Lee has her own, more liberal, opinions. Although arguments between them often become heated, Lee stays true to her beliefs and still discusses politics with her father. Because his views are much more conservative than hers, they have a lot to disagree on, from climate change to immigration to presidential candidates. “When the subject does come up, I really try to pitch my point and have stances,” she said.

Lee urges anyone in a similar situation to take action in their own homes. “It is very scary, because it’s your own parents and you don’t want them to be mad at you or anything, but at some point it is time to say something,” she said. “It’s just good to get your ideas out there, because you never know, you might actually convince them.”

Though none of these student activists can be sure that what they’re doing will make a visible difference, the uncertainty isn’t stopping them from trying. Through her efforts, Draffin has convinced undecided voters in swing states to support Biden and helped countless Democrats make sure they’ve registered to vote and can vote safely. Yu and Kirshnaiah continue to work with the school district to make sure that student voices are heard across the city. Lee thinks her father may vote for Joe Biden for president. And Jackie Fielder, with the help of many students working on her campaign, has gone from a barely known contender to a serious challenger in the race for state senate.

“The future of the climate and the future of our democracy depend heavily on the outcome of this election,” Draffin said. She urges other students to take action, whether it be voting, phone banking or working at the polls on November 3 or some other form of activism. If students aren’t able to phone bank or poll work, Krishnaiah hopes that his peers will at least be aware of what’s going on around them. “I think it’s important for young people to be politically active simply because it matters. If you’re politically aware you are more likely to get involved, to make the right choices, and to vote,” he said. Fielder also thinks that everyone has a place in activism, and encourages students to join the fight for the soul of our nation at every level. “So whether your path of choice is direct action organizing, or electoral politics, or helping out your community, or mutual aid, or a mixture of those,” she said, “it’s all needed.”