The ups and downs of three Lowellites’ adventures in skateboarding 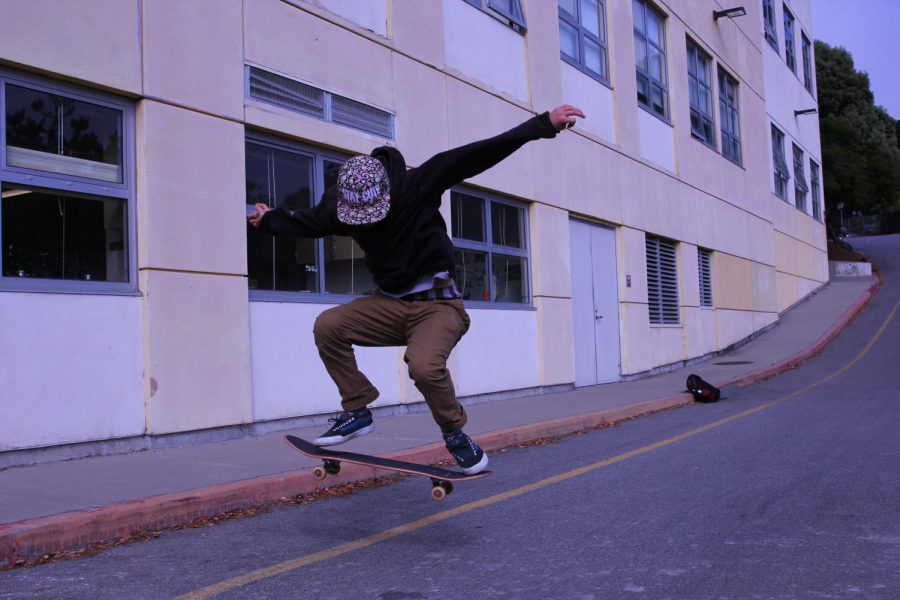 Sophomore Austin Lesseps learned how to skateboard in 8th grade with the help of his uncle. Lesseps skates for an hour or more every day using the skateboard given to him by local artist Jeremy Fish.

It’s 3:30 p.m. on a Friday afternoon. After a long day at school, senior Kyle Carigo races out of his block 8 class, grabbing the skateboard he has meticulously personalized with etchings and colorful stickers, and heads to the student parking lot. For two hours every day after school, the parking lot is Carigo’s own skatepark. He makes sharp turns, performs flips in the air while holding onto the edge of his board, and jumps over curbs.

Carigo is a member of the ever-growing skateboarding community, which has been expanding worldwide since the 1970s. With the activity gaining noticeable traction among teenagers and members of Generation Z in recent years, Carigo and a host of other Lowellites, who live in one of the most iconic skate spots on the West Coast, have taken up the sport.

Although skateboarding first became popular in Southern California in the 1960s as an alternative to surfing, the activity also has deep roots in San Francisco, where images of the city’s ideal skateboarding hills and renowned skate spots have been publicized since the early 1990s. “Spots like the Embarcadero, that’s where a lot of legends like Stevie Williams and Chico Brenes skated in the ’90s,” senior Cal Viet Thacher said. “[San Francisco is] a historic spot, so people will come from all around the world to film videos and live here for skating. It’s probably the best skating city in the world.”

Fascinated by the culture and rich history surrounding skateboarding in San Francisco, Carigo decided to take up the activity with four of his friends during his sophomore year at Lowell. Watching other skateboarders from the sidelines, Carigo initially thought the sport would be easy to learn. However, after falling on his first attempt to do an “Ollie,” a trick in which the rider and the board both leap into the air, Carigo realized the activity would take diligence in order to be mastered. “It seems easy, but when you do it, it’s everything that you didn’t think it was,” he said. “It’s harder than I thought.”

Although it only took Carigo one day to learn how to perform the Ollie, it can often take skateboarders, such as sophomore Austin Lesseps, weeks or months to learn a single trick. Lesseps, who first learned to skate in 8th grade, says that he spent six months mastering the Ollie. “I was very frustrated because I felt like I was making no progress and wasting my time,” he said. “But I couldn’t give up.”

The dedication of Lesseps and other skaters has largely paid off, with him and his peers finding not only a sense of accomplishment in the sport, but also a welcoming community. “Everyone’s very supportive and there are a lot of fun people to hang out with,” he said.

For Carigo, the connections he has made in the skateboarding community have allowed him to pursue another one of his passions, music. While watching skateboarding videos online, he learned about a Los Angeles-based skater who works at Supreme, a clothing brand and skateboard manufacturer that often collaborates with rappers and soul musicians to produce music. Carigo decided to message the skater on Instagram, and the two bonded over their love for the activity. Carigo was able to send some of his music to the skater to be used by Supreme. “It’s funny how anyone you meet [skateboarding] can just help you in general,” Carigo said. “You’ll be out in a new environment [and] anybody and everybody you’ll just be able to talk to.”

Despite skateboarding’s popularity, particularly on the West Coast, Carigo says that skaters are often perceived in a negative light. Before joining the skateboarding community, Carigo assumed that most skateboarders were menacing and aggressive. However, after learning to skateboard and immersing himself in the community, he found the opposite to be true. “We seem super intimidating and scary, which I get because I was in that place too when I first started skateboarding, but then you get to know the people and most skaters are just really nice,” he said. “Skaters have each other’s backs.”

Yet, with all the positives attributes of skateboarding, many remain hesitant to try out the sport due to safety concerns. Carigo, Lesseps, and Thacher have all had their fair share of injuries, ranging from cuts and bruises to sprained wrists and broken ankles.

In some cases, skateboarding can cause more considerable harm, as was the case for Thacher, who suffered a serious concussion and cracked skull after falling off his skateboard while “bombing down Portola,” he said.

Thacher had to stop skating for two years to recover, but his passion for the sport never ceased. “[After two years], I wanted to hop back on the board and I love it more now than I have at any other time,” he said. “The incident didn’t make me want to stop. It pushed me to get better so I wouldn’t fall again.”

It’s falling down that has taught both Thacher and Carigo the importance of perseverance, whether that be in the skatepark or in other aspects of life. “[Skateboarding] is one of the sports that will actually teach you to fall,” Carigo said. “You actually hit concrete, you hit the floor, and you have to get back up and try again.”

More than anything else, though, Thacher says skateboarding is about having fun. He encourages everyone to give the sport a try. “Just go to the skatepark and have fun with your friends, that’s what it’s all about,” Thacher said. “It doesn’t really matter if anyone judges you, it’s like anything else in life.”