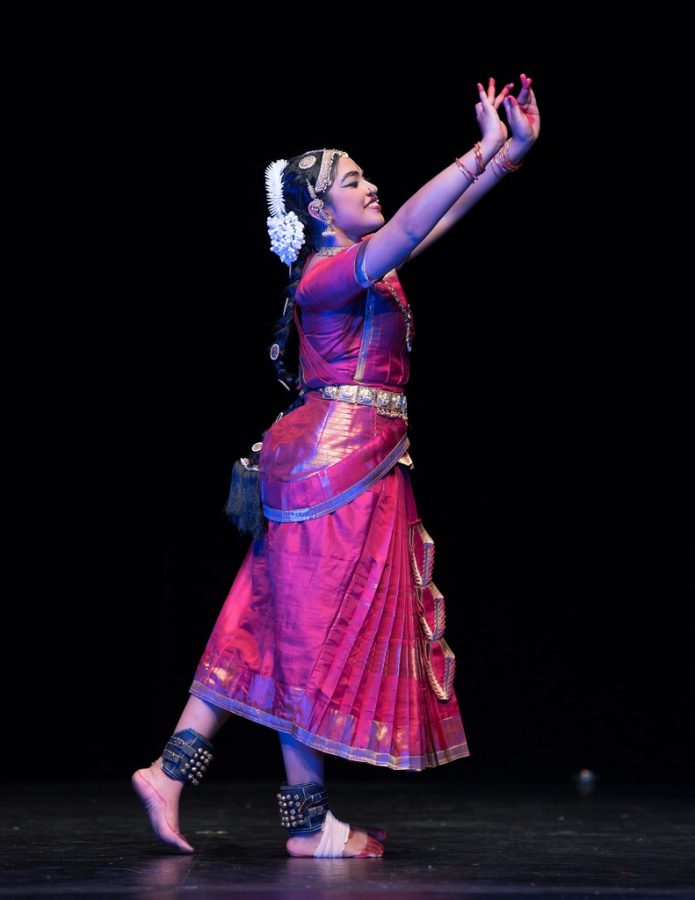 Kavi Rajalingam, a junior at Lowell, has been a student of Bharatanatyam since she was 4 years old.

Junior Kavi Rajalingam’s stage makeup starts to slide off her face as tears cloud her eyes. Her arangetram — the debut performance of a student of Indian classical dance — starts in roughly half an hour. She stands with her family and her guru, Mythili Kumar, around a rose-decorated statue of Lord Nataraja, a symbol of Bharatanatyam, a form of Indian classical dance. They pray together silently to request Lord Nataraja’s blessings for Rajaljngam’s performance. Rajalingam finishes the prayer and puts on her ankle bells, her heartbeat full of anticipation and emotion. As she finishes fastening the bells around her feet, the gravity of the situation truly sinks in. This is happening…this is what I’ve been waiting for my whole life, she tells herself.

Rajalingam, a junior at Lowell, has been a student of Bharatanatyam since she was 4 years old, accomplishing her arangetram in August of 2019. Rajalingam’s strong relationship with her guru Kumar has been a vital part of her Bharatanatyam education, her support guiding Rajalingam through the most complex of routines. Rajalingam now teaches younger students of her own at Kumar’s dance studio, acting as an inspiring role model for other dancers, as Kumar was to her.

Rajalingam originally started learning Bharatanatyam at the Shakti School of Bharatanatyam in Los Angeles because her parents wanted to give her an outlet to express herself through movement and knew classical dance was a source of pride and prestige in Indian culture. Bharatanatyam is one of the most well-known forms of Indian classical dance, characterized by its attention to rhythm and its depiction of emotions and Hindu mythology. Students spend their entire dance education preparing for their arangetram, in which they’re presented by their guru as a “graduate” of Bharatanatyam. Despite starting dance as a shy 5-year-old, Rajalingam rehearsed alongside 9-year-olds in lessons. Her older peers brought her out of her shell, acted as role models she could look up to, and cultivated a caring community she could rely on throughout her childhood.

Rajalingam’s arangetram marked the end of her formal education and provided revelations about the importance of dance to her identity and the community she is supported by at Abhinaya Dance Company. An arangetram consists of seven main dances, all showcasing the dancer’s mastery of adavus (basic Bharatanatyam moves that act as building blocks for more complex dances), balance between nritta (steps) and nritya (emotion), and their knowledge of the Hindu mythology that serve as inspiration for the dances. The focal piece of an arangetram is varnam, a graceful and extremely intricate hour-long dance that praises Lord Vishnu, one of the most important deities in Hindu mythology. The pressure of a set date to master all seven dances served as a strict goal Rajalingam held herself accountable to. Months of bi-weekly private lessons with Kumar, rehearsals with the orchestra, and hours of home practice translated to tangible growth that Rajalingam could see and feel, boosting her confidence and love of dancing. The rehearsals that built up to that 3-hour performance were rigorous, but helped Rajalingam realize how much dance means to her. “I really started enjoying dance when I started preparing for my arangetram…I loved working hard every day, and people actually [cared] that I was working hard,” she said.

In her six years of training at the Abhinaya Dance Company, Rajalingam has learned invaluable life lessons and flourished under the guidance of Kumar. Notorious for her rigorous teaching methods, Kumar has held Rajalingam to high standards to unlock her full potential. Her unabashed and often harsh critique of Ragalingam’s dance technique in private lessons has pushed her to grow assertively: Kumar prepared Rajalingam for her arangetram in just three months, cutting the normal 4-6 month training period in half. “[She] will do anything for you to succeed…she really brings out the best in everyone,” Rajalingam said. Despite her hard exterior, Kumar is a positive role model for Rajalingam. Raised by humble circumstances in India, Kumar mastered three Indian dance forms under the guidance of her gurus and single-handedly founded the Abhinaya Dance Company of San Jose. Kumar’s strong work ethic, ambition, and perseverance have shown Rajalingam what qualities she wants to exemplify in the future. “She’s one of the most inspiring people I know,” Rajalingam said. Rajalingam now channels the same wisdom and discipline that her Guru imprinted on her in her mentorship of young dancers in her dance company.

Rajalingam started teaching younger students at her dance company after her arangetram performance last August. She teaches two main types of lessons: learning lessons geared towards younger kids, and adavu lessons for older kids, which are drills intended to build stamina by rehearsing previously learned steps. Over time, Rajalingam has adapted her own, gentler method of teaching, contrasting with the critical culture she was trained in. During one lesson, her students stayed in armandi, a basic but notoriously painful Bharatanatyam position involving bent knees, for most of the lesson with the help of Rajalingam’s positive affirmations. “I tried to encourage them….and it makes them work harder. I see them [keeping the pose] even more,” she explained. In order to keep her students engaged, she works hard to make the class fun with positive reinforcement and simple dance moves. Seeing her students’ joy during lessons has reaffirmed Rajalingam’s own raw passion for dancing, untainted by stress. “Most kids around [the age of] 9 years old to 10 years old is when they’re having the most fun…it’s not that stressful because when you’re 10 years old, you’re not really thinking about your arangetram,” Rajalingam said.

Despite her undeniable talent for Bharatanatyam, many obstacles have stood in the way of Rajalingam’s continuation of her dance education. Her dance company is located in San Jose, often an hour and a half drive from San Francisco because of traffic. Long commute times and hour-long rehearsals drastically reduce the time for Rajalingam to complete her schoolwork. She is currently enrolled in four Advanced Placement courses at Lowell, which means she has a great deal of homework every night. Despite the time commitment, the energy gained from rehearsal actually motivates Rajalingam to do better in school. “I get a bad grade on a test…I [go to] dance [rehearsal], and that hypes me up [to study],” she said.

Aside from the difficulties with making it to rehearsals regularly and punctually, Rajalingam has faced barriers and discrimination at her dance company because of her status as a non-Hindu. To fully understand and master certain Bharatanatyam dances, dancers need to understand the Hindu mythology and stories about the deities behind the dances. Because Rajalingam is not Hindu herself and wasn’t taught the mythology during childhood, she has had to devote extra study time and effort to learning the meanings behind her dances. Rajalingam has also been underestimated by other dancers at the studio because of her religious status. She recalls receiving condescending sneers from her Hindu peers after failing the mythology portion of her dance exam. “It does hurt when people underestimate your knowledge,” she said. Through all these obstacles, Rajalingam has always reminded herself of her devotion to dancing and kept her head up high.

Bharatanatyam has been a grounding constant for Rajalingam since her early childhood, bringing passion, discipline, and community into her life. Rajalingam is confident that dance will remain a pillar of her existence. “It’s a part of my life, it’s just with me. Even when I’m 90 [years old], I’m still going to be dancing,” Rajalingam said.