More than just Pi Day: Junior memorizes digits of pi to fundraise for the health of moms and babies 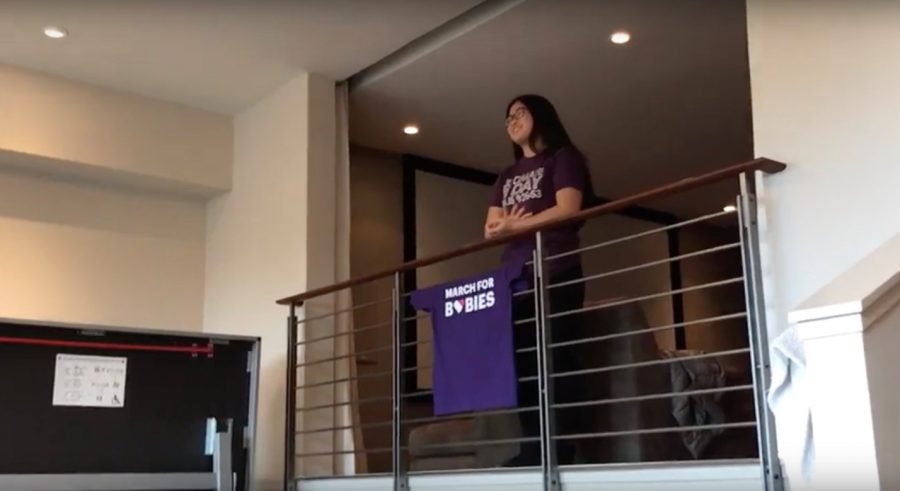 Pi, or 3.14 followed by an infinite number of digits, is a math symbol representing the ratio between the circumference and the diameter of a circle. Pi day itself isn’t a cause of celebration for many, other than getting interesting discounts from businesses of circular goods like Stonestown’s Blaze Pizza, which attracts students from Lowell to line up for $3.14 pizzas every year.

Pi Day is a special day for junior Lila Chen, who has gone to Blaze for cheap pizza, but has also scored free pizza from other places with her skill of reciting digits of pi. “[One year], my mom and I went in and asked the manager, ‘Hey if I can memorize 100 digits of pi, will you give us a free pizza?’ And she was like, ‘Yeah sure whatever, it’s Pi Day,’” Chen said. “I actually memorized 800, and she was like, ‘Oh wow,’ and gave us a free pizza.” For Chen, getting free pizza is just a perk of memorizing hundreds of digits of pi to fundraise for March of Dimes, a nonprofit organization dedicated to the health of moms and babies.

Chen started memorizing digits of pi in 5th grade as part of a fun competition her K-8 school held every year, beginning in 6th grade. She challenged herself to memorize the most digits, and by eighth grade, had memorized over 1,000 digits. While others at her school memorized up to a few hundred, Chen was the only one who memorized pi to that extent.

When Chen entered high school, her personal challenge became part of a larger goal once she realized she could utilize this unique skill to fundraise for March of Dimes. When Chen initially signed up to fundraise for the nonprofit, she didn’t think that using pi would seriously work. “I said, ‘Hey, I’ll memorize this and maybe that will incentivize the fundraisers to donate more,’” Chen said. “People are attracted to the funny marketing shtick.”

Chen feels a deep attachment to the cause because she lost her own baby brother Jonah when he was just nine days old. Although she was only four years old then, Chen distinctly remembers the excitement she felt seeing her newborn brother at home. However, the joy was soon replaced by anxiety when he was rushed back to the hospital because his systems were failing. He passed away soon after. Chen’s brother died of a viral infection, which can be fatal to babies whose immune systems are extremely vulnerable, so she wants to make sure that similar heartbreaking experiences don’t happen to other families. Her family’s devastating loss has forever changed them, and the entire family still feels the effects to this day. “My birthday, my parent’s anniversary, and Jonah’s birth and death are very close together so it’s always a very bittersweet time of the year,” Chen said. “We celebrate how far we’ve come and also how much we’ve lost and celebrate Jonah’s memory.”

To honor her brother, Chen hosts annual fundraisers to raise money for March for Dimes. In doing so, she hopes to do her part to help advocate for the health of other babies around the world. As Pi Day approaches, Chen has been preparing to kick off her annual fundraiser, writing up her personal story for her campaign page and finding time to memorize more digits of pi. Last year, Chen memorized 1,364 digits of pi, and this year, she’s aiming to memorize at least 1,500 digits to further incentivize donors. “I say I’ll memorize this many more digits and that kind of attracts people to donate more,” Chen said. After her fundraiser ends, she holds an event called Pi for Babies, where she invites her top donors to celebrate and watch her recite digits of pi. In freshman and sophomore year, Chen raised over $12,000 combined.

Chen’s campaign is effective at raising money, but doesn’t come easy. Every year around Pi Day she’s had to push to climb back up to her goal since she doesn’t regularly practice memorizing. According to Chen, “If you ask me around the middle of the school year, I won’t be able to recite that many. Maybe only four hundred-ish.” This year, as a junior, Chen is feeling particularly stressed out about balancing her campaign and schoolwork, but she’s come a long way since her first campaign fundraising for March for Dimes, and she is confident that this year’s campaign will be just as successful as previous years. During her sophomore year, Chen had to study for multiple AP tests, which took up a lot of her free time. “I really felt like I really wouldn’t be able to memorize pi because I just wouldn’t have enough time, but it ended up all working out,” Chen said. “So I’m really just trying to find time in the moments where you wouldn’t do anything else, when you’re just sitting around it’s the perfect amount of time [to memorize pi].”

To memorize digits of pi, Chen copies the numbers on sheets of papers, groups them into threes, and memorizes the numbers like a cadence. “I memorize a line and I’ll remember, ‘Oh this one comes after this,’” Chen explained, describing memorizing pi like trying to keep all of the water in a bucket with holes. “I might forget one tiny part of a section so then I’ll plug that hole and go over it for some time which might make me forget something else and then I just review everything until I am not forgetting any part.”

Although many people find Chen’s skill to be unique, there are times when she feels weird about it. Squeezing in time to memorize digits can mean pulling out her sheet of pi digits during class. Since not many people at school know about what she does, Chen has to explain to her inquiring classmates that she is preparing to recite digits for her fundraising campaign, which often comes with recital requests. “A lot of people react saying, ‘Oh that’s so cool’ or ‘That’s so weird’ or ‘Why do you do that?’ It’s a little embarrassing if it drags on for a while,” Chen said. “[In middle school], I’ve recited bits to my class when they would ask, “‘Hey, how much can you do right now?’”

Aside from being able to fundraise so much money for a cause close to her heart, Chen has experienced other perks from memorizing pi. She feels it has improved her confidence in remembering numbers. “I don’t know if I was just always like this, that I could memorize numbers better than facts but definitely after pi, I very much feel like, ‘I see a number, I can remember the number,’” Chen said, who for example, finds it useful when remembering dates for history tests.

It’s no easy feat putting together this event, especially for a Lowell student, but she’s driven by an altruistic goal, and the rewards for her dedication have already shown. “Because of this I’ve been able to fundraise so much money to help so many babies and moms so I’m really glad that I can do that,” Chen said.

Chen’s commitment to helping kids doesn’t stop there. This year, she expanded upon her involvement with March of Dimes by becoming their San Francisco ambassador, representing all of San Francisco’s March of Dimes supporters by speaking at the annual kickoff event and at the march. During a recent kickoff event for March for Dimes with an audience that included ambassadors from other cities and official sponsors, Chen shared her story and why she donates her time to such the cause. As the only high school ambassador for the nonprofit, Chen feels incredibly proud to be part of such a great community at such a young age and plans to continue doing her part to make an ever greater impact. “It feels kind of awkward when I’m the only teenager, but not in an I’m-out-of-place kind of way,” Chen said. “We’re all there because we have some sort of personal connection, and it’s really amazing to me that we’re all supporting it.”