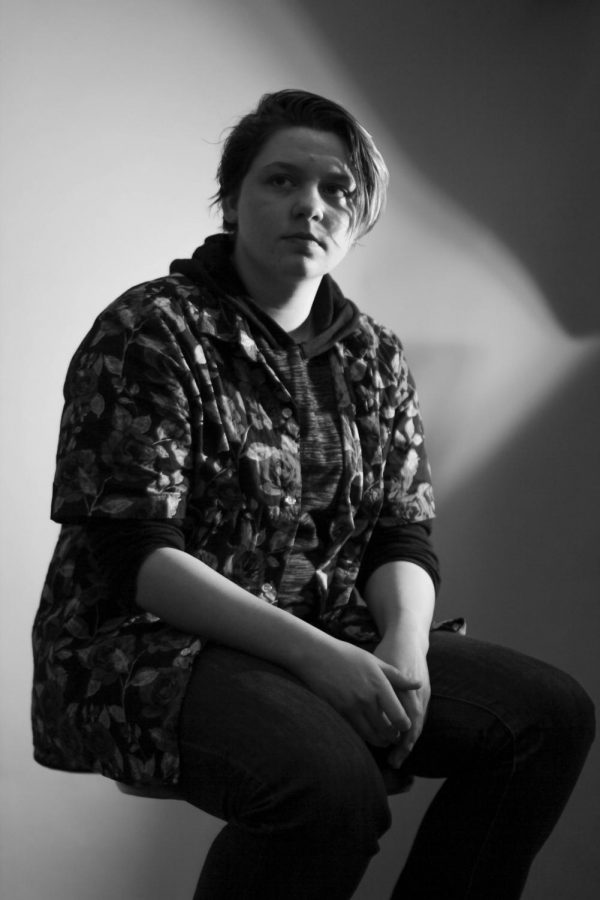 Senior Adrian Jones is the stage manager for Lowell's theater tech program. He has been on theater tech since his freshman year.

The lights dim as the final members of the audience file into the theater and soft conversations mingle with the sounds of footsteps, while the actors mill about backstage. Nervous energy fills the air. In a few moments, the curtains will open. Months of late nights and hard work are all adding up as senior Adrian Jones peeks out from behind the curtain. His work as head stage manager has reached its climax and he feels proud, realizing that the cast and crew are putting on a show.

As a stage manager, Jones has one foot in both the technical and theatrical portions of theater. His job covers many bases, from running rehearsals to being a liaison between the director and the design team. “I sort of preside over all of it,” Jones said.

Jones’ involvement in the school’s theater tech department all started with a friend’s recommendation to join a program he didn’t even know existed. An audience member at the time, he had always enjoyed attending theater productions, but never wanted to act. Theater tech offered Jones a path into that world and he jumped on it. Now, three years and five shows later, Jones is head stage manager for his final Lowell production: “Into the Woods.”

Starting theater tech was like jumping into the deep end for Jones. He signed up as an assistant stage manager without having any prior experience, as his middle school, Gateway, did not run a theater program. When he started, there was only one other stage manager with him to organize all the elements of the show. It fell onto them to organize the rehearsals, keep everyone on schedule, email the different departments and make sure nothing falls through the cracks. “It’s definitely a high learning curve because it’s a lot of interaction and a lot of paperwork,” Jones said. “You hit the ground running.”

Jones also struggled with the social aspects of his job. As a shy underclassman, the public speaking and communication involved with his management got difficult. “It was really awkward when [I was] an underclassmen because [I was] telling a bunch of seniors what to do and they didn’t want to hear it from me,” Jones said. “You remove yourself from being their peer to kind of having to tell them what to do sometimes.”  Now, Jones has the experience necessary to “herd” his peers into action.

As Jones moved up in the ranks of the theater tech department from assistant stage manager to his current position, head stage manager, the responsibilities expected of him only grew. “When you’re stage manager, the work only gets harder the higher you move up the ranks,” he said. He finds himself staying at school long after the lights are off and doors are locked to fine tune details for the upcoming show. According to Jones, the large time commitment is a common dealbreaker for students deciding whether or not to continue with theater tech.

The lack of free time can take a toll, as Jones realized when applying to colleges. Due to his almost nonexistent free time, Jones ended up writing most of his college essays in his English class. “If we had a break day and weren’t doing anything important. I had my laptop out and I wrote my college essays,” said Jones. To him, the feeling of producing a show is always worth the extra hours as he feels he is contributing to something larger than himself.

Jones considers theater tech a passion of his, he has continued outside of school with The Spindrift School of Performing Arts in Pacifica. Through the SSPA, Jones has worked on five other shows. While he plans to pursue a career in anthropology, he is open to continuing working in theater tech if the opportunity arises. “I’ll try and keep doing it because I worked for a couple community theaters and that’s always very enjoyable,” Jones said.

Back behind the stage, Jones has taken control: he’s sending actors out, checking in with lighting directors, and watching the show unfold. From the back, all of the technical support gather together to watch the transitions and the actors. Silence fills the backstage as the crew waits, with bated breath, for one of the harder cues to be pulled off. Jones waits, stage manager binder in hand. I could do this forever, he thinks to himself as he watches the show unfold.