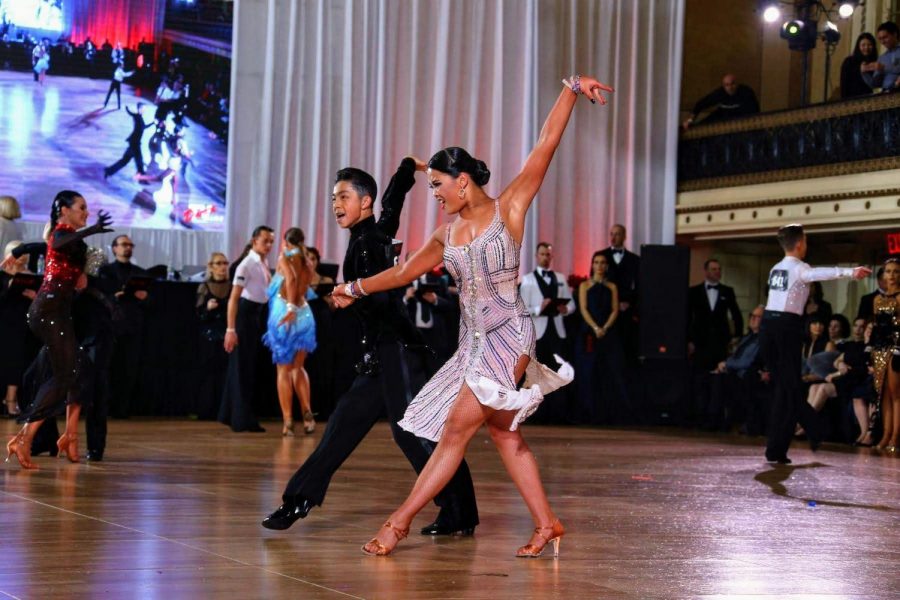 “You stand on the edge of the ballroom and wait for them to call your number,” sophomore Anjelica Lowe said, recalling her experience at the prestigious Junior Blackpool Dance Championships in England. “You could be waiting for an hour for the next round, but you may not even make it.”

To Lowe and her dance partner, senior Tyler Li, performing at nerve-wracking competitions across the globe is simply part of their regular routine. Since first meeting ten years ago at Genesis Dance Studio in San Francisco, Lowe and Li have grown into formidable ballroom dance competitors, earning both national and international awards as a pair. Blending their rigorous academic lives at Lowell and their professional dancing careers is a balancing act made possible only by their unique friendship.

Though the partners began their journeys with ballroom dancing separately, they joined forces at an early age. Both were urged by their families to take up the sport — Lowe’s parents encouraging her to dance like her older brother at age four, and Li’s parents insisting dance would improve his poor posture at age seven — but later they each developed a passion for the art form. One year into Lowe’s dance career, as she worked on developing her coordination, she met Li at Genesis Dance. “We saw it as an opportunity, so I asked him, ‘Would you mind committing?’” she said. “So we just started.” Since then the duo has exclusively trained and competed as a pair.

The partnership Lowe and Li embarked on has proved a time-intensive undertaking. The two practice nearly every day after school, commuting 45 minutes to an hour for lessons at their current studio in San Mateo. They have four coaches, two for each core ballroom style — Standard and Latin. At these sessions, they practice Standard dances such as Waltz and Tango and Latin dances such as Chacha, Samba, Rumba, and Jive. A typical session can be a combination of private or group lessons, totaling anywhere between three and five hours.

Their commitment has been rewarded. The duo’s accolades include awards from countless national and international competitions, notably their achievement of representing the United States at the World Dance Championships in Paris in 2014. In addition to earning titles everywhere from New York City to Moldova, the partners feel their devotion to dance has paid off both practically and in shaping their identities. “I really like dance, it’s my stress reliever,” Li said. “And it sets me apart from other people.”

In recent years, the trials of high school have complicated Lowe and Li’s joint dance career. Meeting both Lowell’s academic expectations and their dance practice quotas requires daily cost-benefit analysis and sacrifice. “[Dance] has taught us a lot about time management,” Lowe said. “There are many occasions, I guess now especially in high school, where it becomes more challenging.” Missing a day of school for a distant competition or skipping a dance lesson to study for a test can be difficult decisions to make. “During AP exams, I had to take a week off from dance,” Li said.

Lowe and Li’s commitment to dance has also proven an obstacle for their social lives. Lowe explained that generally both her and Li have to turn down all social activities, like seeing a movie with friends or going to a concert. “We miss a lot of school events such as dances,” Li said. “I even missed Senior Boat due to a competition falling at the same time.” Not having time to decompress or socialize can be difficult for the pair, given the combined stress of Lowell’s academics and their dance careers.

Despite such difficulties, Lowe and Li continue the sport, relying heavily on each other’s support. After a decade of dance, they have forged a strong bond that helps them handle stressful conflicts. Sacrificing social events is tolerable because on top of being dance partners they are simply very close friends, and homework can be squeezed into their commutes when they help each other study before and after practice.

One way the two have managed to stay involved on campus has been leading Lowell’s Ballroom Dancing Club. The club was founded prior to Lowe and Li attending high school, but they have taken on the responsibility of heading the group since 2017. Through the Ballroom Dancing Club, the pair is able to resolve the separation that dance creates between their school and dance lives by combining them. Because the members have varying levels of experience, Lowe and Li nurture a comfortable, non-competitive environment.

Li’s graduation from Lowell this spring will make their dynamic very different. The responsibility for the Ballroom Dancing Club will fall solely on Lowe. Their partnership may also end depending on his college decisions. Lowe and Li have also become accustomed to relying on each other when their dancing careers and academics come into conflict. When Li is in college, their academic responsibilities will be very different, so their relationship won’t be as effective. Distance might also create an issue, not only logistically, but it could potentially weaken the bond that they depend on to manage such busy schedules.

Entering what might be their final months together, Lowe and Li are making the most of the sport that they have come to value. “I think over time I realized the benefits and I began to like [dance] more,” Lowe said. “I realized how important it is in my life.” Li sees it as a way to take a break from the rest of his life. “I can just escape for two to three hours at the studio,” he said. The two may have to make a difficult decision about their future together, but dance will always be a meaningful part of their lives.