Out but not about: One Lowellite’s difficulties with queer recognition 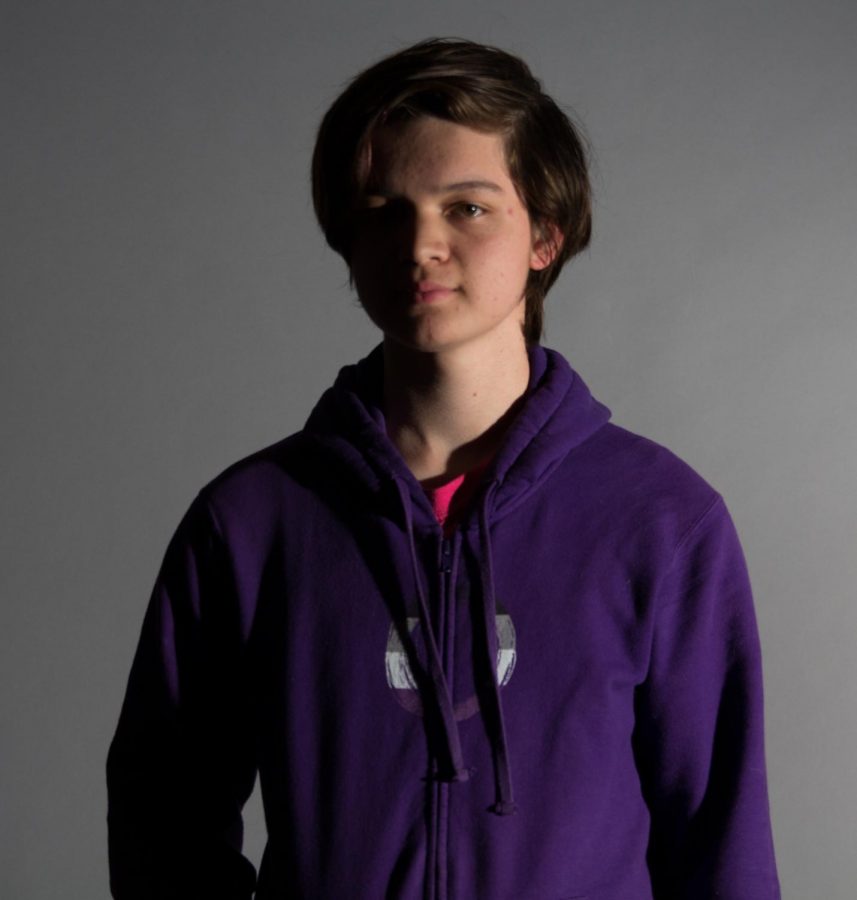 Haven Davis often wears purple clothing, which is one of the primary colors of asexual pride.

“I’ve been thinking about this for a long time, and I think it’s about time to come clean,” typed junior Haven Davis, in an Instagram post caption. “Coming out, if you will.” In the post’s photos, Davis happily posed with the asexual flag, seemingly confident in their identities as an asexual and aromantic individual; but in truth, sharing this personal information was terrifying. Fears that their less recognized identities would be misunderstood or dismissed swirled in their head as they clicked “post.”

Davis’s coming out last year marked a personal milestone, but the declaration was only a fledgeling step in the process of their sexuality gaining recognition and acceptance.

While Davis has observed that the first four identities in the LGBTQIA+ community are fairly visible in the progressive San Francisco community, they have found that the identities not explicitly listed in the acronym LGBT, including asexual, are often overlooked. Davis is asexual and aromantic, meaning they do not feel sexual or romantic attraction. This underrepresentation, sometimes called erasure if it appears to be intentional, of their lesser known sexual orientation, compounded by Davis’s nonbinary gender identity (they do not identify as either strictly male or female and use “they” pronouns) has made navigating their environment challenging.

Davis says ignorance surrounding asexuality and aromanticism has been a recurring theme throughout their high school career. They took Health class sophomore year and recall the disappointing curriculum regarding their identities. “We spent at most three days talking about sexuality,” Davis said. “The word asexual was mentioned once in passing, aromantic was mentioned exactly zero times, and there was nothing spent on gender.” The only reason Davis knew about asexuality and found the label that fits them, is because of the assistance of online friends who suggested they research the term independently the summer before they arrived at Lowell. Given the underrepresentation of asexuality in the media, Davis considers Health class’s lack of comprehensive sexuality education complicit in keeping their orientation in the dark.

Given Lowellites receive little to no universal background information on asexuality and aromanticism, Davis has found themselves needing to continually come out and explain their identity to fellow students. “There’s the people who have no idea what asexuality or aromanticism or nonbinary is,” Davis said. “Then you have to pull out a 40-slide PowerPoint presentation to explain everything.” The burden of repeatedly informing their peers about this highly personal part of their life can make Davis feel uncomfortable on campus. “Often times it feels like [other students] are treating me as an exhibit at a zoo,” they said.

Beyond the issue of asexuality education at Lowell, Davis faces situations in which disregard for their orientation hinders them socially. For example, playing for the baseball team during freshman and sophomore year led to Davis enduring several uncomfortable experiences involving “locker room talk.” “There was discussion about sex lives during just about every other warm up, and even that became a competition sometimes,” they said. “I felt like I couldn’t join in.” Given that baseball is a sport predicated on strong teamwork, the distance they felt between themself and the other players, along with an injury, led them to not rejoin the team.

Daunted by the endless loop of detailing and justifying their orientation to peers as well as the exclusion that comes with it, Davis finds it easier to talk to about their asexuality with people with similar identities. “I don’t really understand a lot of what’s going on in [non-asexual] people’s heads,” they said. “They just tend to work in a different way than I do.” However, despite the existence of Lowell’s Gender and Sexuality Alliance, a club for people of all orientations and identities, they only know four other asexual people and one other aromantic person within Lowell’s near 2,900 large student body. These small numbers means that Davis handles much of the task of dispelling misconceptions around asexuality and insisting on its validity by themself, with only a few others backing them up.

Davis’ experiences with ignorance of asexuality and aromanticism during high school thus far spark apprehension in them over fully coming out as nonbinary. While some friends and teachers of theirs are aware of their nonbinary identity and pronouns, Davis is not yet out to certain people such as their family members. Since their sexuality is already commonly misunderstood, the knowledge that they will eventually have to deal with the same prodding and dismissal about their gender holds them back from fully opening up about their gender identity. This fear of nonacceptance has led Davis to endure being misgendered and called their given birth name rather than their chosen, nonbinary name (Haven) in classes. Davis believes that correcting teachers and peers would “instantly out” them and trigger an additional barrage of questions, considering gender nonconformity has comparable, if not worse, exposure to that of asexuality.

While Davis continues on at Lowell, accepting the fact that recognition of their asexuality and aromanticism is poor at best, they still plan on personally coming out as nonbinary soon. The lack of representation of their identities has impacted their journey with sexuality and gender, and they believe gathering up the courage to make another Instagram coming out post has the potential to bring to their community the visibility they wish that they had.