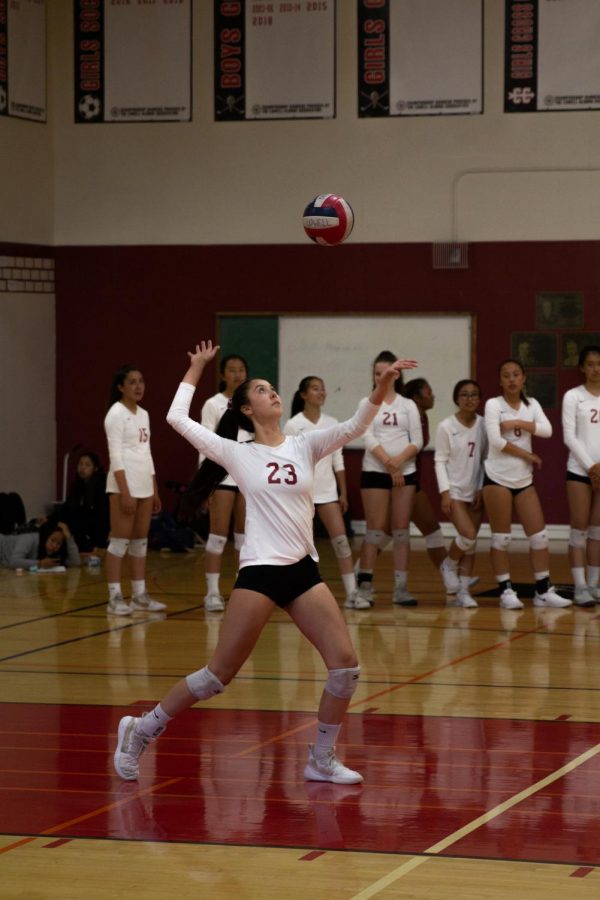 Mariko Tanaka sets up a serve towards the opposing Lincoln side. Photo by Anita Liu

Forty four years: The amount of time since the Lowell girls varsity volleyball team was established and played its first game. The team has come a long way since then, finishing this season in style by winning the team’s first NorCal and state championships and completing what was an amazing and historic performance. Winning the state championships was a team effort, but a few of the athletes stood out as stars in their league. One such player is senior Mariko Tanaka, a middle-blocker who has been on the team since freshman year. Four years of volleyball has changed her life in ways she never anticipated, especially during this championship run, but this might not have happened if not for her obvious potential seen during her first year at Lowell.

Before freshman year, Tanaka never thought about playing volleyball at all, and still didn’t give it much thought when she made the team. “They basically took me because I was tall,” Tanaka said. After playing the sport for awhile, Tanaka realized that she had a knack for it and continued to improve and build on her individual skills. As she continued to play, she realized how much she enjoyed playing, and the benefits it gave her other than being just an extracurricular. “I realized how much I loved the sport,” Tanaka said.

Tanaka has become an essential part of the team through her athletic prowess. She plays middle blocker, partially because of her height, as well as her defensive ability. This position is in the front row, and its main role is to block or be involved in blocking the other person’s hitters. Closely suited to her skills, middle blocker has allowed Tanaka to thrive and become a standout player.

This success and personal satisfaction didn’t come without challenges, however. Tanaka’s junior year was a stressful one. “Volleyball was basically my whole life my junior year,” Tanaka said. Balancing practice and games along with, school, college recruitments, and life was a lot to handle, but volleyball helped her with these issues. “[Volleyball] helped me be more organized with life,” Tanaka said.

Prior to the 2019 season, Lowell’s team had never passed the second round of the NorCal Playoffs, and Tanaka largely credits this to a lack of team spirit and harsh circumstances endured by the team. “I think…it was more about the travel time and the fatigue. Everyone was just not in the mindset to play,” Tanaka said.

However, this year was a different story. Not only did Lowell advance past the second round, but they proceeded to win the Northern California Championship, beating the Sacred Heart Gators 3-2 after a come-from-behind win on November 19th. Initially down 2 sets to 0, the team came back and won three straight sets to clinch the title. The game was a nail biter — each set was only won by 5 or fewer points.

Tanaka’s performance consisted of 17 kills, which is an attack by a player that is not returnable by the opposing team directly leading to a point or loss of rally. After this game, Tanaka was named the MVP of the Academic Athletic Association, an astounding accomplishment.

Tanaka and the team’s success didn’t stop there. They went on to face the Southern California Champions, the South Pasadena Tigers on November 23rd for the Division 3 State Final, and won that game by a comfortable 3 sets to 1. Tanaka herself had 12 kills, and contributed to a strong group effort put forth by the entire team to take down the SoCal title holders.

While the season has come to an end, and with it the last high school volleyball season of Tanaka’s athletic career, her volleyball journey does not stop here. Despite not thinking it would happen early in her high school career, her abilities and advice from others helped her realize her potential and have made her the source of multiple colleges’ interest. “My coach made me realize that I was good enough, and my parents really helped me with everything,” Tanaka said. Wesleyan University in Middletown, Connecticut, took notice and ultimately capitalized on the opportunity for a star player, and Tanaka has since committed.