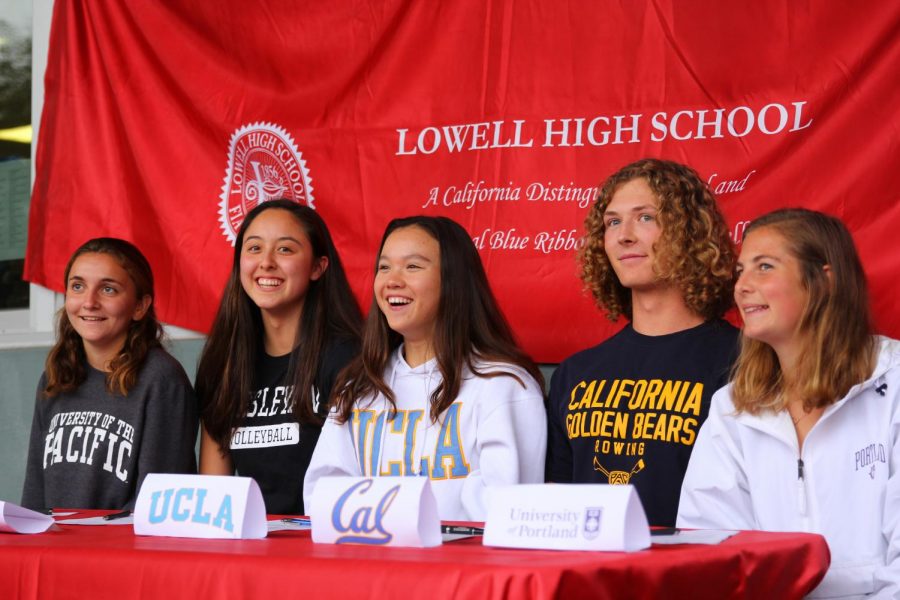 However, a reputation for academics doesn’t mean that opportunities don’t come along to acknowledge athletic achievement. During blocks 5 and 8 on Nov 13, the five Lowellites who had committed to become collegiate athletes were celebrated in an NCAA signing day held by counselor and girl’s soccer coach Amber Wilson and College Counselor Maria Aguirre. This was the first signing day in Lowell’s history, according to both organizers. Wilson and Aguirre were impressed by the enthusiasm expressed by the around 50 students who attended but also thought the event helped educate students that athletics is another option to consider when determining their future. “Hopefully other students get the word that this is happening so it inspires other future student athletes,” Wilson said.

A few of the athletes thought it was fantastic the school managed to organize a signing day. University of Portland soccer commit Hannah McCord thought it was great to have a student’s accomplishments outside of academics celebrated. “Lowell is such a prestigious school academically, it’s really cool to be acknowledged for your [athletic] achievements,” McCord said. “Academics are great here, but our athletics are amazing as well.”

Assistant girl’s soccer coach Gene Vrana also was extremely happy that Lowell’s athletes were formally being recognized. He felt that that Lowell should have acknowledged the accomplishments of the students previously. “There’s never been this kind of positive attention to our athletes and their achievements as athletes and students. This event is long overdue and it’s wonderful to see,” Vrana said.

Although Wilson and Aguirre considered their event a success, they also thought it did more than celebrate the accomplishments of students athletes. Aguirre thought the event also helped students realize they can pursue both academic and athletic achievement. “Because [Lowell is] so well known for our academics, it’s a great opportunity to educate students that colleges are not only looking for students that are successful academically but [also] for those who feel they have other strengths,” she said. Aguirre also thought the event highlighted to students that there are recruited collegiate athletes among their peers.

Wilson and Aguirre intend to hold more signing days in the future but hope to encourage more people to attend. Wilson wants to have more coaches and athletes attend in support. However, she thinks that if another event is hosted, there will be an increase in turnout because people are more familiar with the purpose. “Sometimes the first time you do something, people don’t know what it is and they don’t know to attend,” Wilson said. “Hopefully next time, word will get around and people will just come.”