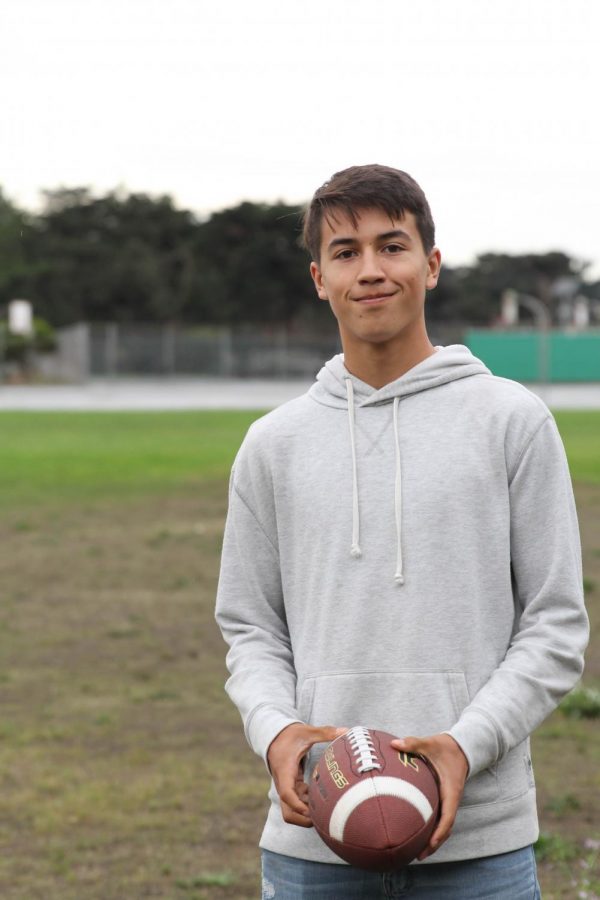 “Go, go, go,” says Reese Miller as he runs on the track parallel to the JV players as they rush towards the end zone. It’s two hours before the varsity practice and he is one of the few varsity players present to cheer on their little brother team.

Miller is this year’s varsity quarterback, a big position for anyone, especially a sophomore.

This is Miller’s first year on varsity, and his second year with the Cardinals. He led the team to its 4th place in the SFUSD football playoffs, Lowell’s first time in the postseason in over five years. Being one of the youngest players on the team came with its challenges in and of itself, but Miller also had to deal with being in a position of power on the team. He had to lead players up to three years older than him.

Being the quarterback, or even a team leader, was never Miller’s goal. He always knew that he wanted to be a football player, but he had never had the opportunity to play. His only experience with the sport was watching it on television and throwing a ball around with his family. In his freshman year, he immediately contacted the coach and tried out for the team. Since then he has learned not only how to play the game, but how to lead others through football’s physically challenging environment. The summer before his sophomore year, Miller worked hard in combined varsity and JV practices. His dedication paid off on the first day of school when he was given his position on the varsity team, having been awarded one of the arguably most important positions after just one year of playing.

But his dedication didn’t pay off when it comes to his schoolmates game attendance.

Football at Lowell is not welcomed with open arms; students are notorious for neglecting the sport and not attending its games. This takes a toll on the morale of the team, which was trying to pull out of a five-season slump. “It’s kinda sad because we go to other schools and they have tons of kids cheering and a band out there, but I’ve gotten used to it,” Miller said. “We have moved on to not focus on the crowd, but to focus on the game.”

Miller was worried about his new position as quarterback, since he had been granted the position his first year on the varsity team and he hadn’t been playing football as long as his teammates. However, he found his worries to be false. “Most of the time I think that being younger doesn’t really matter. I feel like my teammates respect me even though I’m two years younger than them,” he said, “It doesn’t really affect the way that they treat me.”

Miller has felt accepted as he learned to lead the team and make sure that the game runs smoothly. “My job as quarterback is to really just control the offense and make sure everything that’s supposed to happen ends up happening,” Miller said. He has felt pressure on the field because of the sport in general. Football is a high contact sport, but he has grown into his position as quarterback. “It’s my job and I’ve been developed and taught to deal with that,” Miller said.

Outside of football, Miller has a love of history. He is currently taking Matthew Bell’s AP World History class, something that he has to find time to fit into his busy practice schedule. Bell says Miller is really dedicated to both his academics and extracurriculars.

Miller’s outgoing demeanor on the field does not accurately reflect how he acts in the classroom. “He’s actually pretty quiet, he’s just a great kid. He really, honestly is,” said Bell.

Bell also notices Miller’s more enthusiastic side on the field. “It seems he’s taking this idea of being a leader pretty seriously,” Bell said, “I don’t think we see a lot of that in any form really much anymore.” Bell has also noticed this personality switch with his other student athletes, particularly football players. “They’re also awesome kids… they really work hard.”

Miller says he will continue to play on Lowell’s varsity football team for the rest of his high school career. While he doesn’t think he’ll play in college, he plans to give the sport his all for the rest of time at Lowell.