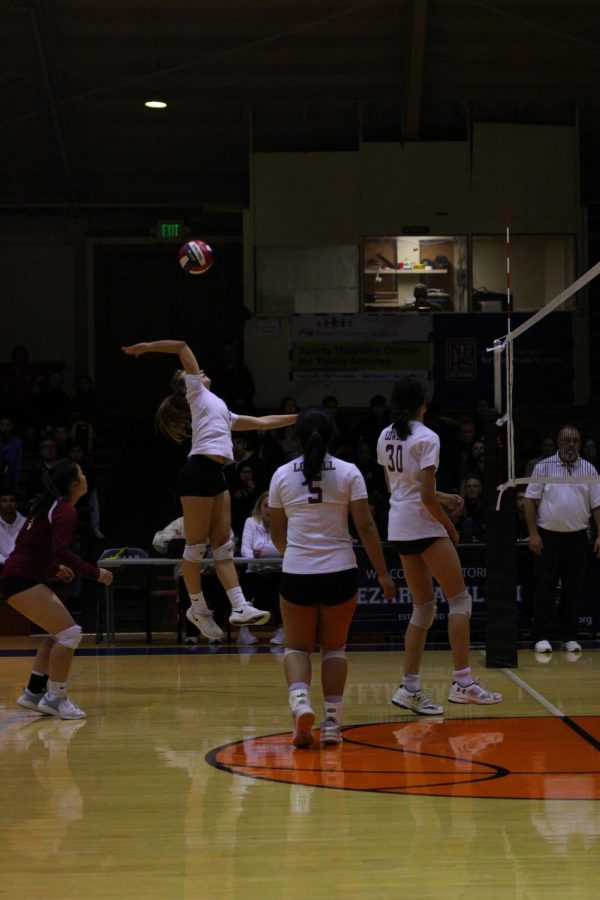 “Telhani Hunkin! Genevieve Cragg! Rebecca Kang!” The announcer read out each of the girls’ names over the mic, and a series of cheers rang out into the gym after each announcement. The Cardinals ran excitedly up to their opponents, each exchanging roses as a sign of good sportsmanship.

From the start of the season, head coach Ronald Palarca believed the girl’s JV volleyball team had a strong chance of winning. “The players have been skilled since the very beginning,” he said. The team had immensely progressed in their teamwork throughout the season “to the point where they’re a really good, cohesive team now,” Palarca said. “They’re really comfortable playing on the court and they understand each other’s tendencies.”

The season had an unusual lack of competition this year too, according to Palarca. He suspected that a lot of the skilled players from other schools were pulled up to their varsity team, “leaving the JV team lacking a little bit.” As a result, he felt that the team was mentally prepared for their championship game against Washington on Nov 8.

Despite the coach’s confidence in their performance, Lowell freshman Telhani Hunkin recalled feeling nervous before the game. This uncertainty was reflected in the first half, with the Lowell Cardinals winning the set by only a six-point margin, 25-19. Hunkin recalled the team feeling anxious afterward; the game wasn’t reassuring for the Cardinals. “After we won it, we were still not all the way confident because it was a close game,” Telani said.

Assistant coach Samantha Woo had similar thoughts, saying the girls weren’t doing their best in the first set. “They need to talk, they need to move their feet, they aren’t moving their feet as they should be to get to the ball,” but remained confident that they could fix their mistakes in the second set. “These girls like to have fun, and I think in that set they weren’t really having fun,” she said. “When they have fun they play a lot better.”

Woo’s confidence proved true in the second and last set, where the JV team got it together. “We were like, ‘Okay we know what to do, so we’re gonna get it done and finish it’,” Hunkin said. Finishing the set 25-11, they overcame the Washington Eagles and claimed the championship title.

When asked what she would take away from the season, Lowell freshman Genevieve Cragg answered, “Everything. I’m so happy and proud of us…We have become really really close.”