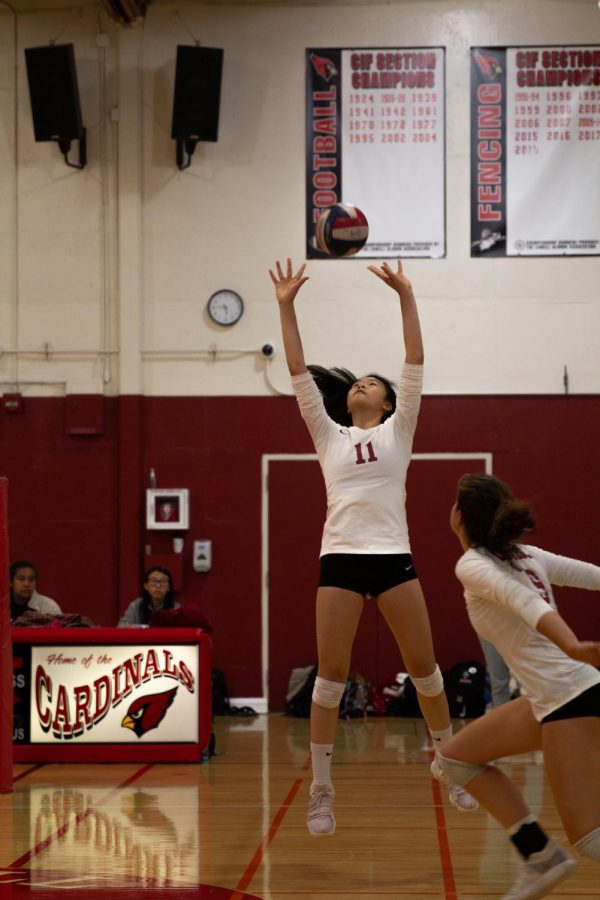 The varsity girls volleyball players line up, roses in their hands, the cheers of their friends and family in their ears. This is the biggest game of the season — the championship. As if playing a championship isn’t enough, the stakes are even higher because the Cardinals are facing the Lincoln Mustangs in the championship yet again. “We were all so nervous,” senior Kimberly Yee said, “We fell a little short last year so we really wanted to take the dub back this year.”

Despite the stakes and their nerves, the Cardinals came out strong in the first set, earning the first nine points of the game. Despite Lincoln’s best effort, Lowell never lost their footing, going on to win the set 25-11. Coach Kelly Sung was happy with what she saw in the first set. “They came out with a lot of confidence, which I think they kind of struggled with in the preseason,” she said. “When we played bigger teams they came out with a little less confidence, but today they were just really on, ready to play.”

The second set was much closer. Lowell went down 2-6 at the beginning, but after a time out they were able to regain momentum and win the set 25-19. “I think we kind of got comfortable winning the first set so easily, and so I think their bodies were just a little bit too relaxed,” Sung said. During the time out, Sung had the players refocus and talked about serving aggressively.

In the third and final set, Lincoln took an early lead, securing the first four points, but Lowell quickly responded and dominated for the rest of the game, winning 25-10 and giving them the three wins they need to secure the championship. According to Yee, minimizing unforced errors allowed them to win the set. “It was more on our part and letting Lincoln make more mistakes,” she said. Sung thought that her team did a good job controlling the ball, leading to their victory. “Whichever team has the stronger defense and serves is going to win, and that’s something we practice everyday,” she said.

After winning, senior Kailee Bumanglag reflected on the victory and what the team had done to get there. “I think the team worked really hard to get to this point; we really focused a lot in practice and our coaches helped to prepare us,” she said.

This year’s victory against Lincoln felt particularly satisfying since the Cardinals had lost after taking a large lead last year. Though Lowell had won both their games against Lincoln this year, the players still knew that it would take a strong effort to win. “We won both [games earlier this season], and the second time around they definitely improved so it kinda shocked us,” Bumanglag recalled, “but we did a good job of preparing for this next game.”

Though the city championships may be over, the team is going to compete in the Norcal Championships. “I know last year we got past the first round, but no team in our school history has gotten past second round so that’s definitely something that we’re gunning for,” Sung said. “That’s always been in the back of our heads since preseason.”

The Cardinals next game will be the NorCal Championships, Nov 19. If they win that round, they will move on to the State Championship in Los Angeles on Nov 22.