How Margaret Atwood changed my perspective on literature 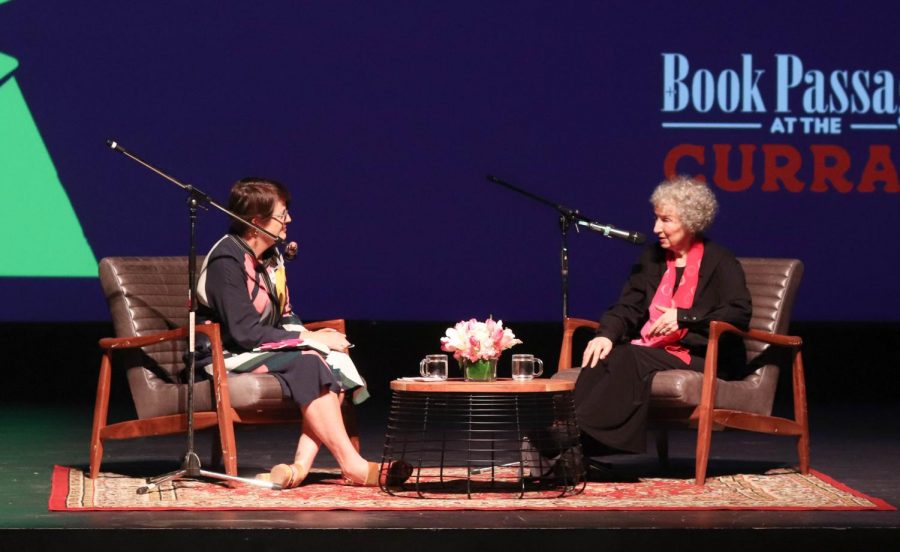 Despite having only watched one episode of Hulu’s book-to-show adaptation of The Handmaid’s Tale, there I was in the Carol Channing Theater, watching Margaret Atwood, the author of said book, talk about her latest release. Atwood had just published The Testaments, the long-awaited sequel to the 1985 The Handmaid’s Tale, and was discussing her work with moderator Kelly Corrigan as part of an international book tour. Her San Francisco stop was organized by The Curran Theatre and arranged to take place in  Lowell’s theater because of the friendship Carol Shoreinstein Hayes — the owner of The Curran — had with Carol Channing. Without this small coincidence of their friendship, Lowell would never have hosted Atwood, and I would never have attended the talk and discovered her impact.

As an avid reader of mostly young adult fiction novels, politically charged works like The Handmaid’s Tale weren’t what I usually reached for. Most of the books I had read were from my middle school days, when I was more interested in a good adventure story to pass the time than a political commentary novel. From the bits and pieces I had heard from the reading community on Goodreads, The Handmaid’s Tale seemed to be a heavy read; it covers issues like gender, sexual assault, classism, and dictatorship. This speculative fiction novel centers around the fictional country of Gilead, where “Handmaids” — rare women with functioning reproductive systems in a worldwide epidemic of infertility — are forced to either reproduce for high-ranking couples in a rape-like ceremony, or be ostracized from society. Readers online were even comparing her world to America under Trump’s administration. Nothing that I had ever read before was this bleak and directly political. While some YA novels I had read, like The Hunger Games, could be about abusive governments, The Handmaid’s Tale hit a bit too close to home. I just couldn’t commit myself to a huge franchise with such profound ideas that would require me to actually use my brain outside of school. A short, fluffy novel — a fanciful escape from the stress of school — was more my speed.

Margaret Atwood, however, changed that.

Last month, as I sat in the Carol Channing theater, surrounded by a full house of Atwood fans, I felt out of place. Everyone there had either read Atwood’s work or watched the Hulu show, meaning I was one of the only guests going in blind. Everything I knew about Atwood were facts that anyone could find online. As Atwood walked on stage in her trademark red scarf, accompanied by Corrigan and her heavily Post-It noted copy of The Testaments, hoots and applause erupted. I didn’t completely understand the hype until Atwood and Corrigan started talking. I quickly realized I didn’t need to have read The Handmaid’s Tale to understand the conversation or appreciate Atwood’s intellect like her fans did.

Atwood managed to make an hour-long conversation about a variety of societal challenges ranging from climate change to totalitarian regimes sound exciting and important to me — someone who can’t go a day without napping in history class. Everything in her books related to a current or past event in today’s society. “I didn’t put [any social issues] into The Handmaid’s Tale [or The Testaments] that didn’t have a precedent in real life,” Atwood said. As I left the theater and headed outside for a breath of fresh air, I was as awake as day despite the late hour, my mind swirling with all the intense topics discussed and a newfound appreciation for Atwood’s mind, as well as an unexpected urge to read the entirety of The Handmaid’s Tale and The Testaments as soon as I got home.

Atwood’s discussion, as well as her books, made me realize politics and social issues weren’t just topics to be debated in class; they were now topics I would willingly delve into without a homework assignment telling me to do so. That night had switched my focus from mundane, trivial thoughts to the reality of today’s pressing issues. If the horrors of her books can be seen in real life, I had to wake up. As our political climate today normalizes more and more of these horrors, how long will it take until we become like Gilead — a society that debases women’s natural rights and traps its citizens in totalitarianism? Atwood made me realize the urgency of these issues and gave me more drive to read political work like The Handmaid’s Tale, as well as stay up to date with the events of today’s society. As I perused my new copy of The Testaments on the car ride home, I realized that I had found a book series that not only fully captivated my attention but also got my mind thinking about real-world issues.