Students weigh in: a guide to top contenders of the Democratic Primaries 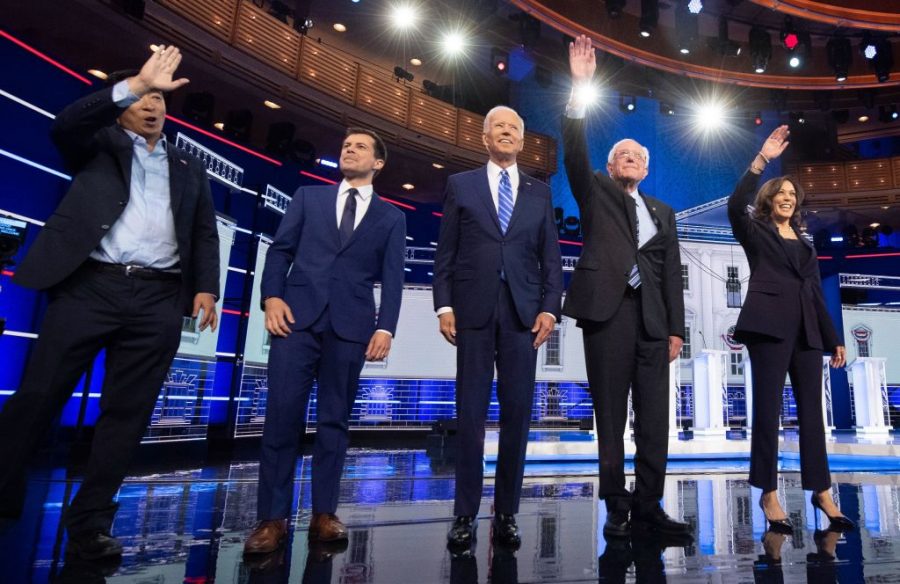 Photo courtesy of Getty Images, by Jim Watson
The Democratic Primaries are crowded, with ten candidates qualifying for the second Democratic Primary debate hosted by NBC News. (L-R) Entrepreneur Andrew Yang, Mayor of South Bend, Indiana Pete Buttigieg, Former US Vice President Joseph R. Biden, US Senator for Vermont Bernie Sanders and US Senator for California Kamala Harris are among the top six candidates according to polling, and they are all hoping to stand out among the crowd." />

Photo courtesy of Getty Images, by Jim Watson
The Democratic Primaries are crowded, with ten candidates qualifying for the second Democratic Primary debate hosted by NBC News. (L-R) Entrepreneur Andrew Yang, Mayor of South Bend, Indiana Pete Buttigieg, Former US Vice President Joseph R. Biden, US Senator for Vermont Bernie Sanders and US Senator for California Kamala Harris are among the top six candidates according to polling, and they are all hoping to stand out among the crowd.

The Democratic presidential campaign season is crowded and roiling with controversy, which is no surprise considering that 19 candidates are still running to secure the 2020 Democratic nomination. Whether due to apoliticism or a wait for the packed field to narrow down to the final contenders, many students have tuned out any news of the presidential race. However, more debates are coming up and the primary season is only months away, beginning in February of 2020. Some students will be of age to vote and, if not, have family or friends who can. For those who might not be keeping up with the news, this guide provides several key student-centered values for the top six candidates based on the latest polling data, as well as student opinions .

Disclaimer: Candidates are listed in no particular order. We chose the three policy areas based on perceived areas of student concern. We decided to cover only Democratic primary news because there is no serious Republican primary challenger to Donald Trump. The student opinions provided here in no way reflect the overall opinion of the student body nor that of The Lowell. Personal research of all issues is strongly encouraged.

“[Sanders has] been the most consistent in policy and has the highest chance of defeating Donald Trump.”

“[Sanders will beat Trump because he] is leading the polls currently and he also goes for the Green New Deal, and he’s popular.”

“[Warren] is very educated, [has experience as] a Senator from Massachusetts, and…she [always] wanted to become an educator, and I think that getting someone from the public who has ideals that she has, [is important] and I agree with her and I think she’d make a good president.”

“[Warren is] the one who has the most policy proposals, and, she’s the one who seems most likely to at least carry out part of them. She does have a bit of a track record for carrying out policy proposals. [She has a] way of viewing things that show[s] that she’s really into solving problems… and she seems to be the person who’s most likely to be able to unite people to solve problems if she’s the president. Even though I [think] Elizabeth Warren [is]… most likely to defeat Trump… quite frankly, that’s not likely at all because none of [the Democratic Candidates] are as…impressive when speaking…as Trump is, even though Trump isn’t really impressive in a good way.”

“[Biden isn’t] exactly left-leaning at all, and he’s been quoted on record as saying nothing would fundamentally change if he were elected president.”

“I actually don’t think [Biden would defeat Trump]. I think a lot of people do think he [will], but he just gets too weird whenever he’s asked questions and he’s always flustered, so…”

“[Buttigieg] just seems like a relatively intelligent guy with good judgement, which is something rare in a politician, especially with our current president. If he’s put in a tough situation, he could probably make a decent decision, [and] his policies are more moderate than that of Bernie Sanders and Elizabeth Warren, which I find appealing because I think some of their plans are a little bit excessive.”

“[Buttigieg doesn’t] actually give any policies, which is a huge red flag in my book. I watched multiple interviews, and… he can go through a whole interview without saying a single policy or explaining anything. He’s just being really shady, also he has like [none] of the [African American] vote.”

“I personally don’t really like Joe Biden or Kamala Harris…especially after Tulsi Gabbard came after Kamala Harris. I think a lot of Kamala Harris’s work when she was a DA was not very good. Although she set records, she was putting people in jail for minor, low-level drug offences.”

“Most people want to vote for [Harris] because she’s SF-based, and most African Americans want to vote for her since she’s African American, but I feel like her agenda [will] push us into a state of remission based on her past agendas as district attorney… especially on Criminal Justice Reform. If you look back into her history, it talks about how she tried to force people into giving false statements or tried to get them to get off by lying about what they did like, ‘Oh, I’ll give you 10 years off your sentence if you simply say this,’ when that isn’t ethical.”

“[Yang’s] main flagship proposal, Universal Basic Income, [or] the “Freedom Dividend,” gives a thousand dollars a month to every single US citizen. He touts the ideas of the revolution of machines and how they’re taking our jobs through automation, and, to be honest, everyone can see that’s happening, we can see that our main street stores are closing and supermarkets are closing, everything is like Amazon, everyone’s buying from Amazon, Facebook, Google…it’s important to realize they’re the big winners of this economy where machines are taking people’s jobs. So in order to combat this, we need to give all the poor people, like, in the middle of America, a thousand dollars a month, because it just makes sense and I’m all for helping the poor people. He just represents this idea of a grassroots campaign, like really grassroots. [He] literally came out of nowhere, [with the] support of totally, like, unknown people online, giving like $1-2 donations. I just know he gets money, and it’s from people, actual people, and not big corporations. He’s not rich already from previous politics. I don’t like filthy politicians [because] they’re scheming and they always pander to companies, which sucks, which is why we need to bring in new, fresh blood. That’s the only way we’re going to flush out politics.”