From novice dancer to competitor on World of Dance: How this junior whirled onto the international dance scene 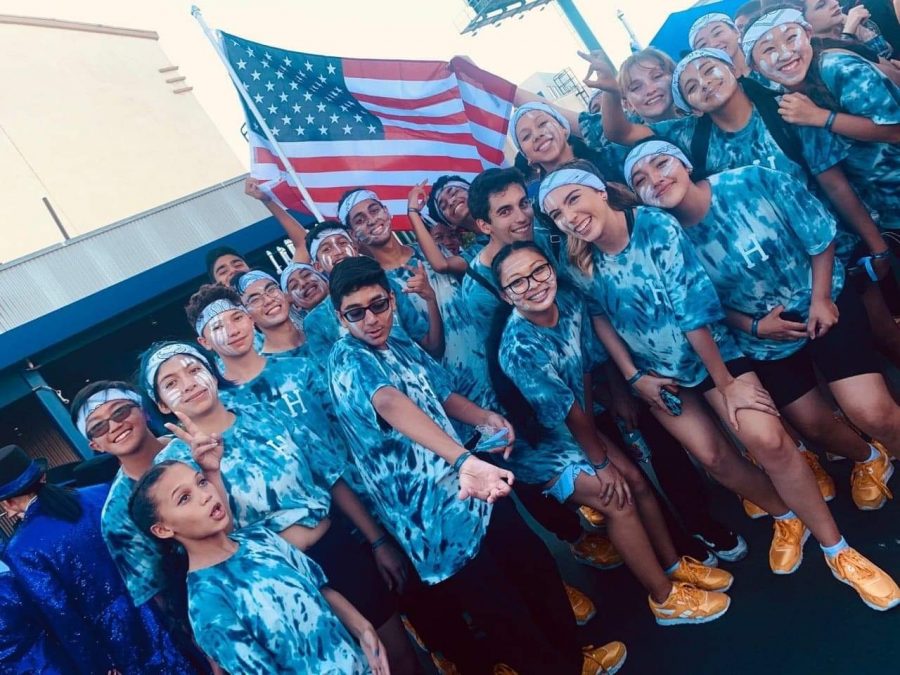 “Make some noise for Poise’N Brigade!” the announcer’s voice boomed over the loudspeaker. A group of 20, face-painted teenage dancers—all members of the youth dance competition team Poise’N Brigade—stood on stage in matching blue t-shirts before breaking into an energetic, synchronized dance as the crowd cheered them on. Ending the set with a dramatic trick fall, the dancers ran off the stage, eager to hear the judges’ comments and scores. It was the 2019 World of Dance (WOD) Junior Championships, a competition in which young dancers from around the world vie for an international title.

This event was not only the motivation behind Poise’N Brigade’s months of hard, grueling practice, but also one of the first times junior Lillian Tang, a member of the dance crew, would participate in a competition of such high caliber.

However, the opportunity to participate in WOD depended on Tang’s three years of practice and refining her technique—two important steps toward landing a spot on Poise’N Brigade, which has been to WOD three times.

Tang’s journey toward becoming part of the 23-member team that would enter the World of Dance competition began in 7th grade, when she discovered her passion for dance. Like many of her classmates in middle school, Tang listened to K-pop, a genre of music known for its intense dancing. She began to teach herself the dances to her favorite songs, like GFriend’s “Navillera” and KARD’s “Rumor,” using Youtube videos.

However, it was not until high school that she became interested in a broader genre of dance—urban hip hop, which is the main focus of Poise’N Brigade’s style. Tang was first exposed to this dance genre at her Lowell freshman orientation in 2017. There, she watched a performance of Breakers’ Alliance, an urban dance club at Lowell that focuses on breakdancing, and automatically knew that she wanted to join the club. “I saw them perform at freshman orientation, and they looked cool. I was like, ‘I want to be part of that’,” Tang said. From Breakers’, Tang was guided to Hip Hop Club (HHC), another urban dance club at Lowell. The American music styles used by these two clubs in their dancing, as well as the freedom of movement involved in urban dance, brought Tang out of her comfort zone and allowed her to develop the affinity she currently has for the dance genre. “I just like the energy,” Tang said. “No shade to ballet, but ballet is so technical, and you need to follow all these strict guidelines, but for urban, you don’t.”

After practicing for over a year with these clubs and exploring the dance style on her own time, Tang had developed a solid foundation in urban hip hop, including experience in choreographing and dancing substyles of urban. In December of her sophomore year, with encouragement from one of her friends already on the team, Tang decided to audition for Poise’N Brigade. Looking back on her audition now through the lens of an improved dancer, Tang recalled, “I was so bad. They accepted everyone, but it’s a matter of whether or not you do good enough to be staged.” Despite her lack of confidence in her audition, Tang was accepted and staged for two large-scale competitions, including WOD, the team’s most prominent event.

Poise’N Brigade’s practices started two months before Junior Championships, which would take place at the end of July 2019. During the first month of practice, the team maintained their usual practice schedule, which consisted of six hours of practice a week—three hours on Friday and three hours on Sunday. However, once July rolled around, the team began both Saturday and Sunday practices, with both practices going from 12 p.m. to 9 p.m. By the week before Junior Championships—infamously known as “Hell Week” by the dancers—members of Poise’N Brigade were practicing every day, some days rehearsing for more than four hours. “My legs were sore for a while,” Tang said. Repeating the hops and jumps in the choreography for multiple hours a day took a toll on all of the dancers, but they were given time to rest before the competition.

The day of the event was exhilarating for the whole team, and Tang recalled the rush of adrenaline she had before stepping on stage. “Every time before I go on stage, I always get a bit of an adrenaline rush,” Tang said. “Our energy was really good, too, because of the extra hype from watching the previous teams’ performances.” The team’s entire act lasted for six minutes, during which they performed to songs like Jaden’s “Plastic” and Todrick’s “Nails, Hair, Hips, Heels.”

Poise’N Brigade’s long hours of practice paid off, with the team placing 17th out of the 35 teams at WOD. Despite not placing in the top three, Tang was proud of the team’s performance, especially considering the prestigiousness of the competition. “It was WOD finals, not WOD Qualifiers, so all these people [had] won from around the world,” Tang said.

But the satisfaction of competing on an international stage wasn’t the only thing Tang gained from her experience. The six judges also provided live feedback, giving the team advice that could only come from some of the world’s most renowned dancers, such as Madison Olandt and Riquel Olander, who have appeared on the televised World of Dance competition and America’s Best Dance Crew, respectively. While the judges praised Poise’N Brigade’s energy and use of various dance styles, including fem, an urban spinoff featuring dramatic feminine movements, and turfing, an Oakland-originated street dance focusing on animation and illusions, they also suggested improving the staging and transitions between pieces, two aspects of dance that Tang finds challenging. “The transitions are always really hard, because everyone’s moving,” Tang said. “[The choreographers] are not going to put you in a different place in their piece because you have to move to the other side for the next [routine].” This meant that dancers were running long distances on stage to get to their next position, resulting in a messier act.

After her performance on WOD, Tang decided to continue her involvement with Poise’N Brigade with the goal of refining her skills and becoming a better dancer. Although she was not able to compete with the team in the 2019 World of Dance Bay Area Qualifiers due to the competition conflicting with the start of this school year, Tang is committed to further improving her technique under the guidance of the crew’s choreographers. Presently, she does not see dancing as a career and does not have any definitive goals in mind. Instead, Tang is opting to see what opportunities arise. “It’s more of a hobby,” she said. “I hope I can still join some teams in college.”

With over three years of dancing experience and one international competition under her belt, Tang offers advice for aspiring dancers. “Take classes,” she said. “You get to learn from many different choreographers, and you get exposed to a lot more. You get to connect with people and network.” Along with taking classes, Tang believes it is imperative to explore new activities. Because of Breakers’, HHC, and Poise’N Brigade, she was exposed to more opportunities than she could have ever imagined. “I learned choreography and movement from different people,” Tang said. “I got feedback and knew what to improve on.” By working with different people from various backgrounds—from people dancing for leisure to people dancing on the competitive stage—Tang was able to evolve from a middle schooler delving deeper into her appreciation for K-pop to an experienced urban dancer with time on the international stage.