Good game! Class of 2019 sports captains reflect on their athletic careers at Lowell 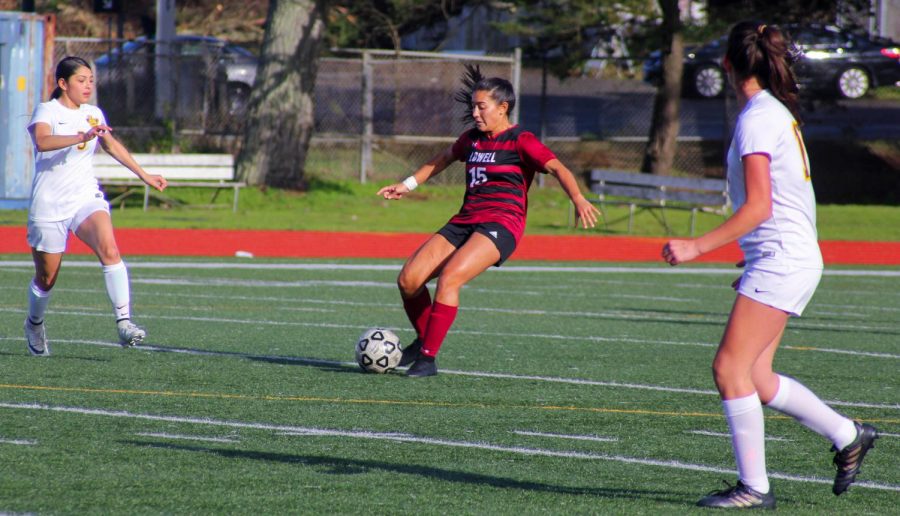 What do you love most about soccer?

I play soccer, and then I get to eat a lot of cake. I don’t feel bad about it because then I go play soccer. Like this morning I woke up, I did my workout before school, I skipped English, me and [my friend] Nick went and got two cakes, and then we ate them. I have soccer later, and it cancels out entirely; it’s equilibrium.

What was your favorite part about being on the Lowell team?

I’ve acquired some underlings who will generally do whatever I say, and they bring me sushi. Going from learning from the older kids, to being the older kids, and then acquiring sushi.

What is your favorite memory from soccer at Lowell?

Both of my years as an upperclassman we went to the post season tournament. The first year was a little more fun because it was the first year that it had been done for our division. We got to take these really long bus rides up to Redding and Sacramento. We’d stop at In-n-Out and one of our coaches, Vrana, would pretend to be people’s grandfather so that they got free hot chocolate. Winning NorCal was obviously fun, but it was a little different this year because all of our games were at home so we didn’t get to go anywhere. But we did have picnics during school. At one point we all went to the language building during fifth block and had food from Trader Joe’s. We just sat there and ate because we were too anxious to go to class. So that’s fun.

What have you learned from being captain?

[My fellow captain] Fiona Plunkett and I did a lot of work with our coach, Ms. Wilson, to be a medium between the team and her because a lot of the new freshmen and some of the new sophomores don’t know her very well. It’s easier for them to talk to us and we will tell her, anonymously, what we know. Instead of people being too scared to talk to her and not saying anything, it’s like a little gateway.

This year we had a lot of good team bonding, so I think people did a pretty good job trying to mesh together and get to know a bunch of people that you don’t necessarily see outside of soccer. I also think we did a pretty good job handling pressure this year, as a team. There was a wack amount of hype before the Mission game and it kind of psyched us out a little bit, but we did a good job, we went to Mission, and we destroyed them. It’s the same thing going into NorCal because we’re the home team so it’s a lot of pressure.

Anything you’d like to pass on to your teammates before you graduate?

Any words of wisdom or knowledge you’d like to pass on?

Sometimes we go to other public schools, and we’re like, yeah, this is more what we’re used to. Then we go to Branson and we’re like, s**t, they have a lot of money. Sometimes we’re like “this team’s bad” or “this team’s good,” but I think regardless it’s important throughout the year that we keep respecting our opponent and we make sure that we go into the game without any preconceived notions about how they’re going to play or what they’re gonna bring. It’s not really about the other team; it’s just about what we do. Keep working hard whether it’s during practice or whether it’s in the game.

What are you going to miss about your team?

Obviously the people, we get to know them pretty well. I think it’s just really fun to be able to play soccer with them [teammates] on the field and then see them in class or in the hallway. You automatically have a flock.
Julinna Cheung, varsity swimming

Julinna Cheung is a four year member of the Lowell swim team, but she’s been swimming club since she was six years old. She plans to continue swimming club or to pick up other college sports when she attends UC Davis in the fall.

What do you love most about swimming?

Even though you have all your teammates, the main goal is always based off of your individual improvement. I like the mentality, you have to be in it for yourself, and you have to be ready to work your a** off.  You can’t really rely on anyone else. It’s all about you.

What was your favorite part of being on the Lowell swim team?

I think [it’s] definitely the community that has been created. A lot of my best friends are swimmers and they’ve been on the Lowell swim team for all four years too. I think just the atmosphere and the sense of spirit that we all have for it.

What sets the swim team apart from other team sports at Lowell?

I think one of the big things is definitely its size. It’s kind of hard to have that many people on one team all together just because there is JV boys and girls, and varsity boys and girls, and it’s just a lot of people to work with. But we end up making it work every single year, each person gets to swim their events, and every person gets work so that’s kind of cool.

What is your favorite memory of swimming at Lowell?

I think my favorite memory is definitely when my relay team, three of us are graduating this year and one’s a junior, we broke our old record, got first, ended up going to states for it, and at states we finaled. That was just a crazy moment for all of us, and we didn’t think that any of that was even possible. Being able to achieve that was a really amazing experience and I never thought I would have ever gotten that far in swimming as a sport.

What are you gonna miss most about your team?

Have you learned anything from being a captain?

Definitely. I think that being one of the captains, it’s cool to bring everyone together for bondings, support them, see how they grow as individuals on the team, and how we can help foster that and make them become better swimmers and better individuals as people.

Let’s see, I think since it’s a huge team you may feel as if you’re not getting attention, but the biggest thing to remember is you want to be there to support others and work together. If someone’s struggling, be there to support them and just have fun with it, you know? As long as you’re all in it for the same reasons and you’re working towards the same goal, then you’re going to have fun.
Andrew Ren, varsity boys basketball

What do you love most about basketball?

Why did you choose basketball over other sports?

I’m not really good at other sports, and my oldest brother introduced me to basketball. At the beginning I didn’t really like it because I just wasn’t into sports back then. When I got into it I realized how much work it took, and I watched all the pros, the NBA and all that. I just kind of got addicted to the process of getting better at dribbling and shooting.

What is your favorite memory from basketball at Lowell?

Battle of the Birds. Thats always something that really sticks out because you’re not really guaranteed to experience that sort of environment in your daily life. And even in basketball, there were a few years that I didn’t go to the championship. But Battle of the Birds has even maybe a higher energy than a championship game would. When Battle of the Birds happens, and both sides are rooting for either Washington or Lowell, it’s just that back and forth energy that you get from both teams that really want to win. I feel like that environment is something that’s really rare in my life right now so I really cherish that.

What sets the boys basketball team apart from other team sports at Lowell?

I feel like in basketball, one man can’t go very far. You can’t rely on one person and expect to win multiple championships or have prolonged success. If we were to just focus on me or focus on someone else on the team and just pass them the ball all of the time, that wouldn’t have been Lowell basketball. We’re all about playing better, playing smarter, playing together. Just that togetherness and working as a team is one of the main emphases of playing basketball.

Anything you’ve learned from being captain?

Being a captain is more than telling people what to do. That’s what my mindset was when I was first told that I’d be captain of a team. You do this, give me the ball, and everything has to go to my standards. It’s not that; it’s just that I was chosen because people think that I was able to go down in the trenches with the entire team, drag along the mission, drag the team along and not just be above them and tell them what to do. It’s not like being a boss, it’s more about being a leader.

How has being on the team affected you as a person?

It’s taught me a lot about discipline. When I was a kid in eighth grade I just wanted everything that basketball could give me, and I wanted to give my all to basketball. So I did what the pros did. I watched all of these motivational videos and all that, and I started taking early morning runs at like 5:30 a.m. in the morning in eighth grade. Basketball just taught me what discipline is. If you want something and you want to get better at something, then you have to work for it.

It’s not words of wisdom coming out of a philosopher or anything, but focus, I guess. Focus on what the mission is and do it in a Lowell fashion. Don’t do it without any class. Know what you can reasonably attain and work towards those goals.