Beyond the canvas: Four SFUSD Arts Festival participants share the process behind their work 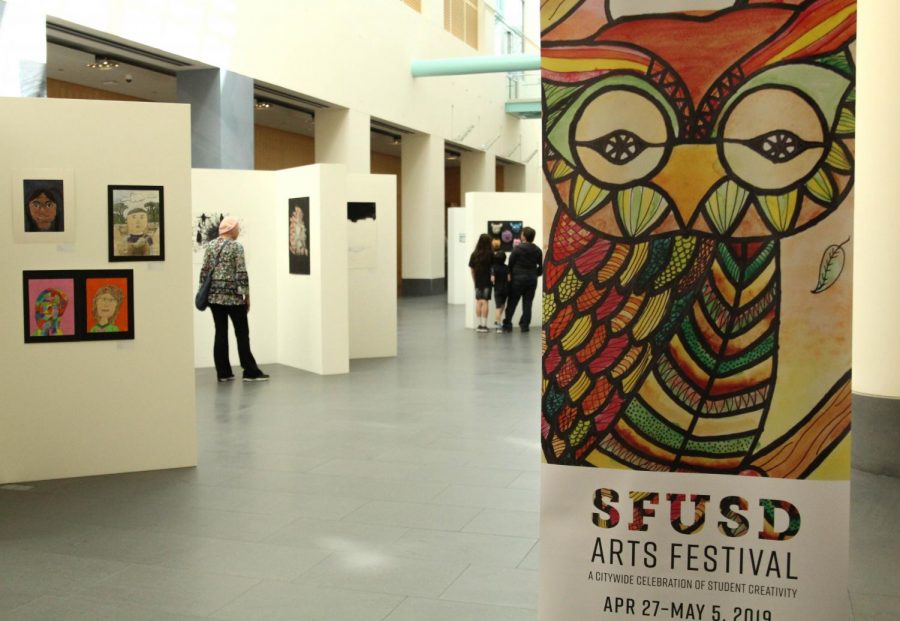 Several students were given awards for their submissions into the annual SFUSD Arts Festival. Four students share the meaning behind their piece and their experience in their artistic field.

The SFUSD Arts Festival, an annual event featuring San Francisco student art, writing, and music, took place at the Asian Art Museum on April 27 to May 5. As choral, instrumental and dance performances took place throughout the week, physical displays featured multiple forms of visual art, as well as a collection of creative writing pieces. A multitude of the works displayed were created by Lowell students, and several works placed in the Congressional Art Competition.

Right out of the gate on her artistic journey, junior Chloe Rimer won the second place Congressional Art Award for a self-portrait she painted using only her fingers. Rimer had only taken a year of art when she created the piece, but her skills managed to impress the judges from the SFUSD Arts Festival.

Rimer painted “Self Portrait” for a class assignment in Kirsten Janssen’s Advanced Art class at the beginning of the fall semester. Janssen asked her students to create a self portrait utilizing only their fingers and ink. The nature of the project made creating her painting manually challenging, but Rimer appreciated the lack of more thorough instructions since she had more artistic freedom. “When she gave us the self portraits, she was like, ‘Okay here’s an inkpad. Now, make yourselves,’” Rimer said. As opposed to other assignments based around figure drawing or landscapes which entailed clear guidelines, Rimer had no formula from which to create her self-portrait, and instead had to put more artistic thought into the piece. The extra time she spent figuring out how to create the piece gave it a genuine quality. “I had to really put thought into it as opposed to being like, ‘Okay I’m just gonna draw this flower because I’ve been taught how to draw a flower,’” Rimer said.

In working on her self-portrait, Rimer achieved more self confidence. For one thing, she spent two months confronting an image of herself without judgement. “I think that my self-portrait as a person isn’t hideous or anything, but that’s not how I see myself in the mirror,” she said. “Mentally, it messes with you, because you’re fighting against what you see versus what you think you look like.It really makes you introspect on how you perceive yourself, physically.” After finishing the project, Rimer had better self-esteem and a more positive body image. In addition, seeing her work in a museum and winning the award made her more confident about her artistic abilities. “It’s cool that people thought my piece had some sort of value, or that they wanted to look at it,” Rimer said.

Rimer believes the distinction between her submission and others was her bold style. “I’ve always gone very heavy. I go all out and take very big risks,” Rimer said. “I do a lot of things with my art pieces where I can’t go back if I mess up, like using the amount of ink that I did, for example.” She runs the risk of making irreversible mistakes, but Rimer isn’t focused on perfection. “If I f*ck up because I use too much ink, and I can’t erase it and can’t go back, at least it catches your eye.”

When senior Valentin Nguyen found out that her charcoal self-portrait “Am I a Star?” was to be hung in Washington D.C.’s capitol gallery and displayed on the House of Representatives’ website  after winning the first place Congressional Art Award for District 12, she didn’t know how to feel. One of her largest pieces at 18×24 inches, “Am I a Star?” was originally supposed to be a more Rembrandt-inspired technical piece, rather than a portrait with a message behind it. However, about six months after she finished the portrait in the summer of 2018, she decided to stick gold stars on it, hoping that it would ascribe new meaning to the piece. “I remember thinking about my past when I used to think that awards and gold stars defined who I am and what I’m capable of,” Nguyen said. “I didn’t like how they’re universally used to measure how successful someone is. I think having that kind of mentality was detrimental to my happiness in the long run, and the stars kind of lay on the surface of my face because of how rigid and superficial they are; they aren’t part of who I am.” By awarding the piece, the judges for the Congressional Art Award ironically ignored Nguyen’s original message.

Her flexibility of various concepts shown in her artwork has been a product of her experimentation and experience of various art forms and styles throughout her artistic career. Her chosen medium varies as she dabbles in many different art forms, from painting to illustration to sculpture, but she has a preference for graphic art over fine art. In fact, as of now, Nguyen currently attends an afterschool program to learn about old-fashioned printmaking. Before that, she took a fashion course. While she may have won an award for what was originally a technical piece, Nguyen usually just creates whatever comes to her mind, focusing on “complex, totally meta ideas and concepts, just whatever seems really cool,” she said.

Although she has been doing art for so long, Nguyen didn’t actually begin to take it very  seriously until she enrolled in Ms. Janssen’s art class in her sophomore year, her first-ever art class. “She’s very passionate about the arts and she’s always encouraging us to make more art and to take it seriously,” Ms. Janssen said. She encouraged Valentin to think about the the whole thought process behind art, and the purpose and message behind it. “She’s kind of changed the way I think about art; I thought art was just, ‘Oh it looks pretty. People will like it and you get money that way,’” Nguyen said. “But now I think of art as something I can do for myself and something that is a way for me to express my feelings. [Art is] more for myself and not for others.”

Junior Cal Thacher’s short film, “Screen Age,” was shown at the SFUSD Arts Festival Gala in the Asian Art Museum on May 2.

“Screen Age” is meant to bring awareness to smartphone apps whose sole intention is to keep the user engaged on their device for as long as possible. “A lot of these social media apps and games that you can download have come off as very friendly, but really they’re trying to keep you on your phone as long as they can. They really don’t care about you,” Thacher said. According to Thacher, the CEOs of game companies are only concerned with “how long [they] can keep [users] on the phone so [they] can advertise and make them buy products.” Thacher was initially inspired to create the film by articles he read about apps being designed with malicious intent and by his own cell phone addiction. “I look around sometimes and everyone’s on their phone, and it wasn’t like that five years ago,” Thacher said. “It’s kind of weird how much [cell phones have] taken over everyone. I was trying to get at how they kind of changed the entire world.”

According to Thacher, not only is “Screen Age” his most recent film, it was also the most ambitious project he’s taken on so far. “I decided that I should be consistent with the theme of my movie. Because it’s about smartphones, I felt like I should film on a phone…but the iPhone camera has its limitations,” Thacher said. “The technical aspect of things: the lighting, how much depth of field you can get, it’s pretty limited on an iPhone camera.” In addition to grappling with constraints on the camera’s abilities, Thacher tackled filming at night and capturing moving shots, both difficult tasks that took anywhere from several hours to multiple days to accomplish. “I had to really put together everything I knew to make it work,” Thacher said.

“Screen Age” and Thacher’s second most recent film, “Picnic Perfect,” have been accepted into several film festivals around the world, including the SFMoMA, LA Children’s Festival, Smart Philm Festival, Southern Shorts and Cinequest. Thacher plans to continue submitting his work to more festivals, not for prize money or rewards, but to spread the messages his films contain. “When you have a movie that has such a strong message like that you want everyone to be able to see it and interpret it in their own way,” Thacher said.

Following the theme of unexpected awards, freshman Ashley Glancy won an honorable mention in poetry for the first poem she has ever written. Her poem, “I Come From an Island,” earned her the “Reclaiming Narratives” award at the Literary Awards section of the SFUSD Arts Festival. Her poetry teacher, Susan Terence, prompted her class to write a poem from the perspective of either a living, dead or fictional relative, and Glancy chose her grandmother. Glancy found her grandmother’s identity as a Pacific Islander and experience of cultural expectations, like arranged marriage at 15, to be interesting to express through poetry.

Glancy’s grandmother has dementia, so in order to write the poem, Glancy had to imagine what a 15-year old Pacific Islander would have gone through years ago. She knew all of the events, but the challenge was representing her grandmother’s narrative style. “I don’t really know what her personality was like, so I kind of had to guess a lot of things like what she might have thought,” she said. “Trying to figure out what her opinions were like how she would talk, I kind of had to make those things up and imagine so I was proud of myself for that.”

While she did feel out-of-place among the other writers who likely had far more experience than she did, Glancy nonetheless felt that her piece did show an important perspective, that of a minority from another generation.