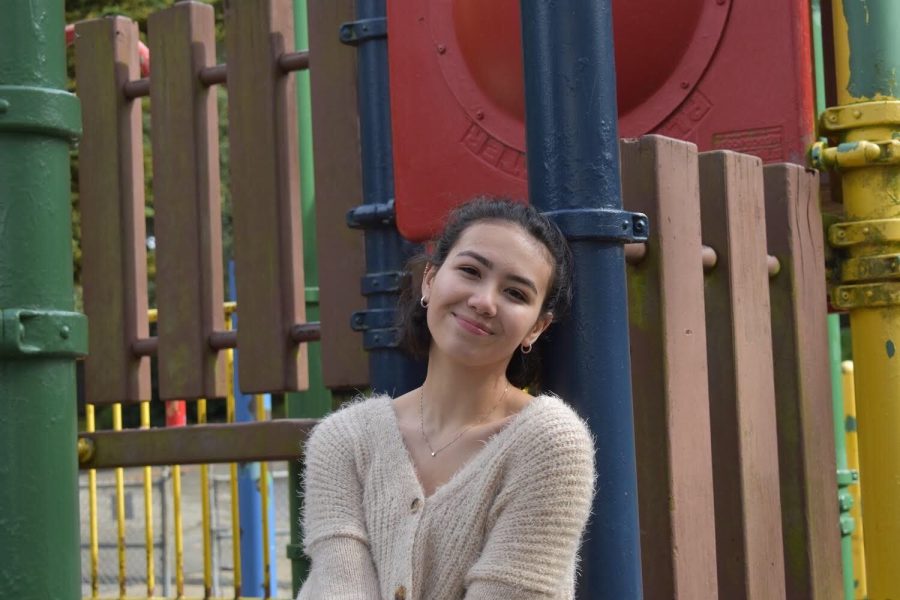 Perhaps because of the reputation that comes with attending Lowell, not many people talk about the people who transfer out. Lauren Lucas, currently a junior at George Washington High School, is a transfer from Lowell who’s learned a lot about herself from her two miserable semesters at Lowell.

Lucas has been a high achiever all her life. She was the first chair violin in orchestra, was one of the best swimmers in California, and got nothing but As in middle school. She aspired to live up to her academically accomplished parents and dreamed of going to Lowell, even planning one day to go to Stanford.

But in December of her eighth grade year, Lucas was hit by a car and cracked her skull. The resulting traumatic brain injury left her with persistent and extreme headaches. As a result, Lucas didn’t go to class for most of the rest of eighth grade. But at the same time, applications for Lowell were due and Lucas applied despite her injury. She didn’t consider how her injury would affect her academic performance and was confident that she would do well at Lowell once she got in.

Lucas was thrilled to start her first day at Lowell. As an extrovert, she had fun meeting new people in a new exciting environment. But after the first few weeks, her workload increased, and the resulting stress made her trauma-induced headaches worse. Lucas started missing big portions of class because of her headaches, and as a result, she felt socially excluded. According to Lucas, many of her friends were made in her classes. “So when you’re not there, that definitely creates a social barrier,” she said. This isolation made Lucas even more anxious, which only caused her headaches to escalate, further preventing her from going to class. “I was in this huge popular group, which at the time was super important to me” she explained. However, her relationship with her friends and classmates soon went downhill as her headaches caused her to miss more and more school.

When Lucas was out of class, she had social media to go to, but that only added to her problems. “I was way too obsessed with everyone liking me and way too obsessed with social media,” Lucas said.  One app, Afterschool, was used by Lucas and her peers at the time. Afterschool is a social media platform for an entire school, where users can anonymously post anything for all students to see. “[Afterschool is] literally the worst f–ing app that was ever created. I hate it so much,” Lucas said. Lucas quickly became infamous from rumors spread on the app. Because Lucas left class so often due to headaches, people viewed her absences as phony. “There were a lot of rumors about me just faking it,” Lucas said. “I had this huge reputation of being fake, like, ‘Oh she’s fake, she doesn’t have a headache, she’s faking it.’ People thought teachers were babying me for ditching class and thought I was sucking off the teacher.” Lucas had been struggling with anxiety since kindergarten, so being cyberbullied made her feel vulnerable to everyone else’s judgments. “My entire life had changed because of this [accident], and people using that against me was definitely really hard,” she said.

To further compound her social isolation, Lucas was soon dumped by all of her friends. On the first Wednesday of her spring semester, one of her friends sent Lucas a direct message on Instagram telling her to stop hanging out with them. “It was really hard for me to accept that I’m not connecting with these people,” Lucas said. She felt like she had lost her place in everything; her dream school turned into a place she dreaded going to. Once she was kicked out of her friend group, Lucas’s social anxiety peaked. Her ex-friends were people she had met in her classes, so she didn’t want to go to class and have to see them. “I didn’t want to be seen by anyone. I was mortified,” Lucas said. “I was around really toxic people [who] thought I was toxic.” She became extremely anxious and shameful when walking in the hallways of Lowell, feeling like social media had caused strangers around her to know of her bad reputation. “That was so stressful to have on me all the time so I just stayed in the wellness center,” Lucas said. From the day she was excluded, Lucas did not go to class for the rest of the semester and instead spent it at the Wellness Center. By the end of the semester, Lucas was only taking two classes, because it was predicted she would fail all of her others. “It was so isolating,” she said.

This was when Lucas started thinking about transferring out of Lowell.  “I felt so misunderstood, teachers didn’t understand, I was a nuisance,” she said. Although Lucas wanted desperately to transfer, her parents wanted her to stick it through. They didn’t know about the isolation she was facing, because she was too embarrassed to tell them, but she did break down in front of the school staff. “I was like, ‘I hate this school. I don’t wanna be here, let me leave.’” Lucas said. “‘I need to get out. The problem is not myself, the problem is the surroundings. I need a new start.’” Lucas knew that Lowell just wasn’t the place where she would be able to thrive, because she was not getting the support she needed. “I should have advocated more,” she said, “But at the same time, it’s so hard to expect that from a student.” Eventually, however, she was able to convince her parents to let her transfer.

Lucas transferred to Independence High School a few months into her sophomore year. Independence is an alternative high school that offers an individualized curriculum for students whose needs cannot be accommodated in a traditional school setting. At Independence, Lucas felt free to be herself and unashamed of her disability. She would only have class once or twice a week from 9 a.m. to 12:30 p.m., which took away a lot of stress and gave her time to relax and heal. According to Lucas, a lot of the school population consisted of “troubled” students who were there because they skipped class or were expelled. Despite the negative reputation, however, Lucas felt like the teachers at Independence wanted to be there and were passionate about helping their students. One of her teachers even opened up to them about their heroin addiction in the past. “Everyone is so kind and close and it feels like a real community,” Lucas said.

Lucas soon regained her academic confidence, validated as the nerd she had felt like in middle school. “I think [transferring to Independence] was the greatest decision I’ve ever made because it was the complete polar opposite of Lowell,” Lucas said. However, Lucas was not content to stay at Independence. Despite the supportive environment, Lucas felt like she wasn’t being challenged enough. The school was very small, there weren’t many extracurriculars offered, and she was still lonely because she lacked a normal social life. Once she felt she had gotten everything she could from Independence, Lucas transferred to Washington as a junior in the fall.

Although Lucas was anxious about entering another traditional high school, she found the transition went better than expected. She made two best friends in the theater department, and today she finds herself surrounded with people she connects with, clicking with her surroundings, and no longer anxious or feeling isolated. Theater allows Lucas to express herself, especially because she  had been held back for so long with social anxiety at Lowell. During the times she was alone at Lowell, Lucas had watched a lot of movies and grew a passion for theater. She chased this escape and played the lead role in one of Washington’s plays in the fall. Lucas is busy, but now feels fulfilled with the people around her and motivated to achieve her goals: fundraising for the drama department, doing well academically and keeping her mental health in check.

One year ago, when it seemed like she had hit rock bottom at Lowell, Lucas would’ve never seen her life coming together so well. If she hadn’t gone through the accident or became a victim of cyberbullying, Lucas believes that she would probably still have problems with social anxiety and her sense of self. “But now I don’t give a damn. I perform. I don’t care if you criticize me and I don’t need to be liked by everyone, I just want a few close friends and I care much more about quality over quantity in friendships,” Lucas said. Having to come to terms with herself after beating herself up handling Lowell was a huge realization that changed Lucas’s life and given her words of wisdom. She urges people to step out of societal pressures to find what’s best for themselves.

Lucas believes that transferring out of Lowell makes students feel like a failure because they can’t live up to being a Lowell student, but she wants to let students know that it’s never too late to transfer. “I want people to feel like they can leave, [because] it’s a huge commitment and its terrifying,” she said. Lucas emphasizes that the hardest part is being brave enough for change, and not letting the stability of staying at Lowell get in the way. “You have to realize that what’s best for you might not be Lowell,” she said. Lucas believes that high school should be the time for students to figure out who they are, and at the end of the day, where students go to for high school isn’t significant. “Yeah, Lowell will prepare you for college,” Lucas said. But “[people don’t] understand that [Lowell] comes with losing their sense of being a kid.”

Lucas isn’t sorry for any of the hardships she’s had to overcome in transferring from Lowell, as she’s come out a better person. “I don’t think it makes me weaker than others, I’m so much more self-aware,” she said. She’s grateful for her experiences. Though she is still recovering from her brain injury, she isn’t afraid to advocate for help anymore. At the beginning of this school year, Lucas had still wanted to go to Stanford but now isn’t interested at all. She’s figured out that her passion lies in pursuing theater at the University of Southern California. Even though theater is not necessarily what her parents want her to do, she now has a better sense of herself and knows that what she’s doing is what fulfills her. She’s learned that the most prestigious and well laid-out path isn’t always the best one, and is much more confident in her success, now having “the best” college essay about this experience. “I honestly don’t think I’ve been happier than I am now,” she said.