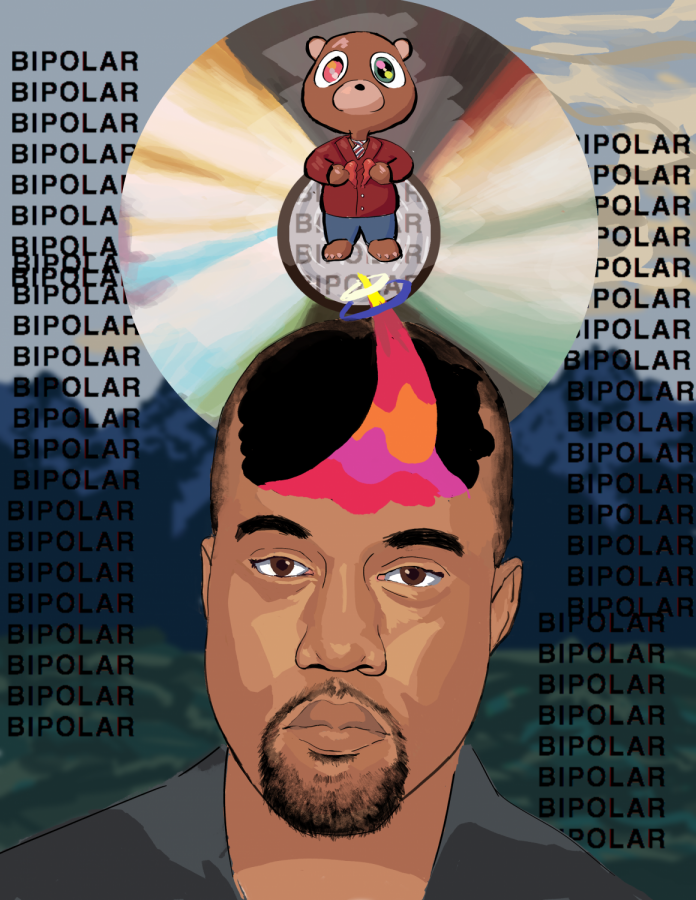 Kanye West had an interesting 2018, to say the least. Under his label GOOD Music, a subsidiary of UMG, Kanye produced five albums in five weeks, with one even being nominated for rap album of the year at the 62nd annual Grammys. He also said slavery was a “choice” on TMZ, went on a long rant about his love for current President Donald Trump on SNL and shared his bipolar diagnosis with the world. Kanye’s bipolar diagnosis brings up some issues concerning his mental health and safety. Kanye is risking his life and health for his music, and his recent actions have brought up the question of what is reasonable to risk for your art. Kanye, and artists in situations similar to his, should stop putting his health at risk to make one more chart-topping single or one more critically acclaimed album, because doing so might force him into early retirement, or even cause his death.

Back in December, Kanye tweeted something that slipped by most of his fans: “6 months off meds I can feel me again.” Roughly six months before this tweet is when Kanye started to come back into the public’s consciousness with outrageous statements like “slavery was a choice” and how he and Trump shared “Dragon energy.” This led some fans to assume his mental illness was an explanation for his recent outbursts.

Kanye West says he was diagnosed with bipolar disorder back in 2017. Lately, Kanye has been open about his mental health and how he feels it’s his “superpower,” even writing, “I hate being Bi-Polar it’s awesome” on the cover of his latest solo release.  Although he has since said it was a misdiagnosis, and we cannot be sure if he actually has bipolar disorder, Kanye’s comments on how the medication makes him feel like a different person are similar to how many people feel. This is a common misconception among people with Bipolar Disorder, which can mostly be associated with the dosage of the medication.

Kanye said in an interview that he feels that if he takes his medication, his music won’t be a true representation of who he is. His most recent album, “Ye,” was praised for his lyrics about struggling with being a husband and a father. Kanye feels that he could not have made this highly personal album while on his medication. He believes the medication would have warped his view on being a father and husband, and altered the message he was trying to convey in his music. But Kanye doesn’t seem to be thinking of the negative effects of not taking his medication.

The main danger of bipolar disorder is the severe episodes of depression. Some of the symptoms from these episodes are self doubt and suicidal thoughts. According to The U.K. National Health Service, these episodes can last from six to 12 months, but with medication they can be shortened down to three months. Coming off the medication can often be dangerous if done improperly. Many studies have shown that abruptly stopping the prescribed dosage is dangerous and can lead to intensified withdrawal effects. Some of the main effects of withdrawal are anxiety and fatigue, which can be amplified if you have a heavy workload.

Kanye should look to his peers when considering stopping his medication. Some of Kanye’s peers diagnosed with bipolar disorder were Kurt Cobain and Amy Winehouse, two musicians who famously died at a young age.

Both of these artists tragically passed away due to separate issues in their own personal lives, but there’s no doubt that improper treatment for bipolar disorder contributed to their early passings. Kanye didn’t go through any sort of abuse like Amy Winehouse or witness the suicide of two family members like Kurt Cobain, but his heavy workload and intense scrutiny by the media may increase his risk for a severe episode.

In late January, it was revealed to the public that Kanye is currently involved in a legal battle with his parent record label UMG. Because of this lawsuit, parts of Kanye West’s contract with the label have been released by the label, and we learned that he can’t legally retire or take a break from music.

Kanye hasn’t stopped making music in the last 15 years. Recently his music has taken a darker and heavier feel. Considering Kanye’s heavy workload and general stress from the music industry, this darker tone makes sense. The poor guy is tired and just wants a break, but his contract is preventing him from doing so. Compounded with his potential issues of going off of medication, Kanye’s current situation can’t be good for his health, and we’re just now starting to see that reflected in his music.

Kanye’s struggle with mental health may be symptomatic of a larger issue surrounding the music industry. According to a study that compared interviews from 1,227 musicians, the Music Industry Research Association concluded that the risk for mental illness within the music industry is more than double the national average. The study says 50 percent of all the musicians studied suffered from some sort of mental illness, while less than 25 percent of the average adult population suffered from mental illness. Not only did the study reveal that these musicians struggled with mental illness, but 11.8 percent reported to have considered suicide.

Many artists are constantly putting their physical and mental health at risk for their music, but is it worth it? If they keep putting themselves in danger they may permanently injure themselves and may not be able to continue to make music. Kanye deciding to not take the medication prescribed by his doctor is just another example of musicians disregarding their health for their artistic pursuits. Some may see the musicians being passionate, but in reality it is very dangerous. It would be tragic to see Kanye or other musicians die as a result of being careless with their health. They should consider the long-term consequences before constantly risking their physical and mental health.