Arcade to be replaced with Student Union Classroom 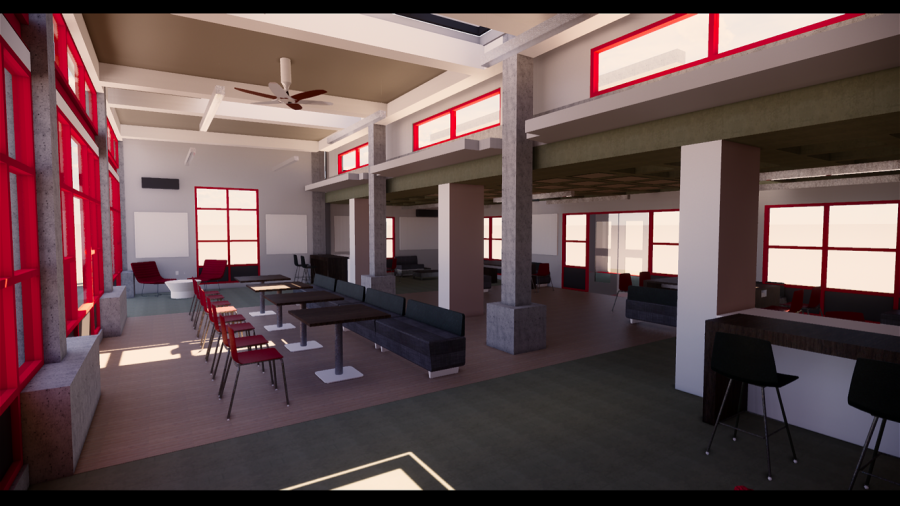 The arcade is always full of students eating lunch, listening to music, doing homework, cramming for tests and socializing with their friends. But soon, this area will be renovated to serve a new purpose.

This June, construction will begin on a new building in the arcade area, which the district refers to as a “Student Union Classroom.” According to SFUSD project manager Mary Fung, it is now estimated that the building will cost $942,000 and the district has hired construction company Angotti & Reilly to complete the project. The renovated area will consist of an enclosed space that will be able to accommodate one or two classes at a time. Fung says that the building is set to be completed by December of 2019.

It is still mostly unknown what the space will end up being used for. However, one possible use for the space is as a classroom and conference room. According to Angotti & Reilly Project Manager Anthony Reilly, the building has classroom features and includes whiteboards and display boards.

Though the space could be used as a classroom or conference room, Principle Andrew Ishibashi envisions the student union as a space that will facilitate the sharing of students’ personal stories about overcoming adversity in the hopes that it will help educate the Lowell community. “The purpose of the student union is that cultures could learn from each other,” Ishibashi said. “I won’t be here [when the student union is built] but that was the vision I had.”

Ishibashi hopes that the main feature of the area will be the display of pre-recorded anecdotes from people of different backgrounds. A visitor would be able to pick up a headset, click a button on a laptop and listen to a recorded personal narrative.

According to Ishibashi, the stories will cover a wide range of issues, including immigration, coming out and stories about overcoming adversity. “This [will be a] place to hear authentic stories from our students, from our community and even from other students from other schools,” he said. Ishibashi hopes that hearing these stories will help connect people with each other and educate them on the diverse backgrounds and histories of the people in their community. “To have the face of a person, telling you their story and their frustration, and how thankful they are for whatever it may be [is very powerful],” he said.

Ishibashi’s vision for the student union was born in 2016, when Lowell’s Black Student Union (BSU) led a walkout after photos they deemed offensive were taped to the library window. The images included pictures of several black rappers along with former President Barack Obama under the title “Happy Black History Month #GANG.” Shortly after, Ishibashi was given a list of demands by the BSU. One of the demands was the student union. According to senior Alexa Coleman, the demands were made with the intention of increasing student awareness of African Americans’ experience at Lowell. “We just wanted people to know and recognize the things we go through to be at this school on a daily basis,” she said. Three years later, Ishibashi is following through. “I couldn’t make it happen immediately,” Ishibashi said. “But I told them that I’ll do my best. And what ended up happening is that it’s been approved.”

Coleman thinks that just building the student union will not be enough to make Lowell students more understanding of the experiences of African Americans at Lowell. “I only think it’s going to help or impact if other students of different races are willing to come and hear their stories and act on them,” she said. Ishibashi also knows that the success of the student union depends on Lowell students’ reactions to it. “I think it will impact Lowell students the most if they walk in there with an open mind,” he said.

Though Ishibashi has good intentions, it’s hard to know if his vision will actually get implemented. Ishibashi is retiring after this year and will not be able to oversee the opening of the student union. Instead, he will be trusting the project to other people that will hopefully implement his vision. According to Ishibashi, the project will most likely pass on to assistant principal Orlando Beltran who is currently in charge of Lowell’s grounds. Furthermore, the school has yet to make any concrete plans about where the stories will come from. According to Ishibashi, he has identified several possible sources for the stories, including sourcing pre-existing stories from community centers in the Bay Area and acquiring them through student submissions. However, he has not taken any concrete steps toward contacting those organization or recording students stories. “I usually do not start work until I see movement on it,” he said.

When The Lowell contacted the district and the San Francisco Board of Education to find out what they think the building is going to be used for and why they decided to fund it, The Lowell did not receive responses.

Whatever the building eventually gets used for, it will be a significant change for Lowell’s campus.