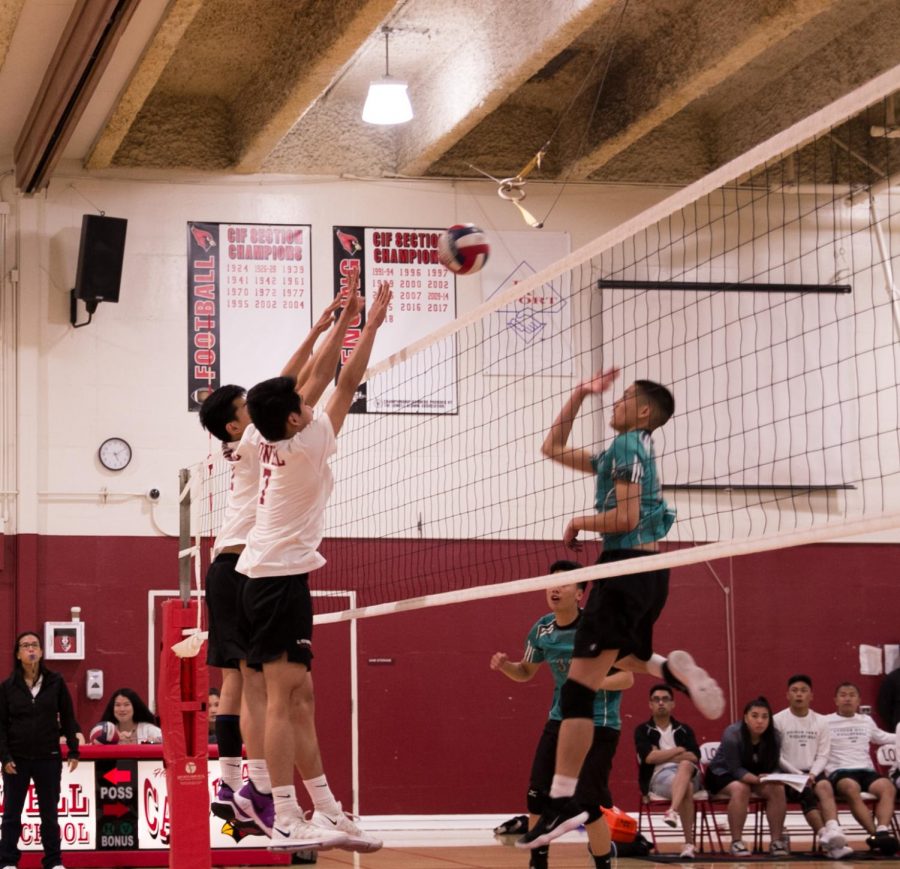 Sophomore outside hitter Brandon Bui and middle blocker Derek Quach work in tandem to knock down the Burton Pumas during the home game on April 24.

Cardinals fight hard at home in narrow loss to Burton Pumas
The varsity boys volleyball fell to the Burton Pumas 3-2 in an intense game, breaking their winning streak of the season, on April 24 at home.

From early on, the Cards struggled to break the tying scores. The opposing team then took the lead and the Cards fell short and lost the first set 25-23. The Cardinals were nervous and unsure at the start, making mistakes because they weren’t completely in the game yet, according to junior setter Bryant Zhu.

During the second set, Burton continued to stay in the lead, and the Cards lost 21-25. According to coach Samantha Woo, the Cards faced the same issue of anxiety in the second set, intimidated by their loudly confident opponent. The team was discouraged after losing two sets, but coach Woo sparked a new energy in them during a time out.

The cheers from the crowd and renewed support from their teammates hyped up the players which helped the Cardinals regain their confidence, according to Zhu. The team took over and beat Burton 25-18 in the third set. “As we kept playing on, we knew for a fact that we could beat them,” senior libero Brandon Chen said. “Every team has a chance to play and I think that’s when we started getting more aggressive and more not nervous.”

The Cardinals peaked in their fourth set, winning 25-22 and tying 2-2 with Burton.

Lowell went all out and fought for every point during their final set. They were neck and neck at the beginning, but the Pumas crept a few points ahead and the Cardinals lost 15-11.

Although the Cardinals came home with a loss, the team felt united for once. “It’s honestly one of the best games we’ve ever played,” Chen said. “Every game before we’ve never really played as a team we kind of just capitalized on our own strengths, but I know this game felt like we were connected in some way.” The loss also strengthened the team’s determination to win their next games. Zhu said that the team will be very “hungry” for their championships against Burton in May.


Cardinals conclude season with loss to Lincoln Mustangs
Before advancing into the playoffs, the Cardinals were defeated by the Lincoln Mustangs 3-0 on May 1. The Cards faced another 3-0 loss against the Mustangs, who have held the AAA Boys Volleyball championship title for the last two years, during playoffs on May 7 at Lincoln. This ends the season of the varsity boys volleyball team.
Delete Image
Align Left
Align Center
Align Right
Align Left
Align Center
Delete Heading