Track meet vs. Bucs and Eagles 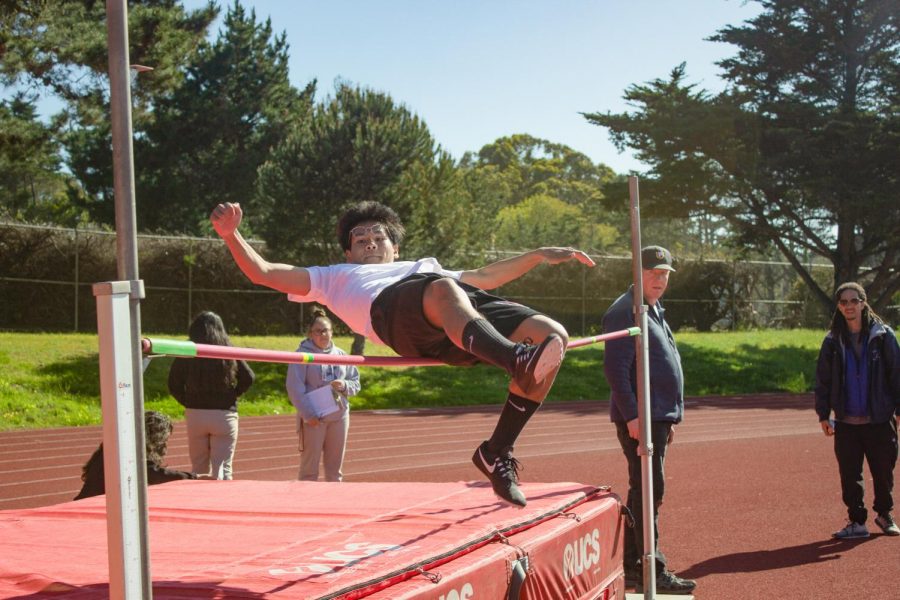 Freshman Andy Truong jumps over the bar in the high jump.

On April 17, Lowell hosted a track meet against the Balboa Buccaneers and the Washington Eagles.

The frosh/soph girls did very well at this meet, placing either first or second in almost every event. In the 100m dash, sophomore Brianna Grissom impressively took first place with a time of 13.11. Next, in the 200m dash, Grissom took first again with a time of 26.44. In the 400m dash, sophomore Sophia Ladyzhensky got second place with a time of 1:06.13. “The competition is good,” she said. Ladyzhensky hopes to run a new personal record during the rest of her season. Yen placed fifth in this event with a time of 1:11.78. “Even though I placed last, I was just thinking about my time,” she said. Yen also hopes to improve her overall times throughout the season.

There was a large turnout of frosh/soph boys at this meet, creating the need for multiple heats for most of their events. In both the first and second heats of the 100m dash, Lowell placed fifth: freshman Hayden Kwok with a time of 12.93 and sophomore Owen Park with a time of 12.97.

After that, in the 4x100m relay, Lowell lost to Washington, placing second with a time of 54.53 as compared to Washington’s time of 52.0. Liu ran the second leg of this event and believes they could have done better had they been given more time to practice as a team. “Our team was sort of made on the spot so we weren’t ready. Our results were because of that,” she said, “I guess we were so focused on working on things like technique and endurance, we just forgot about individual specific races.”

In the varsity girls’ last event, senior Esther Chung placed first in the 110m hurdles with a time of 19:91. However, she was the only runner in this race, as no other schools had athletes in this event.

Lowell’s last meet before All-City was held at home on May 2 against the Burton Pumas, the Marshall Phoenixes, the Galileo Lions, the Academy Wolves, the Balboa Buccaneers and the San Francisco International Huskies.