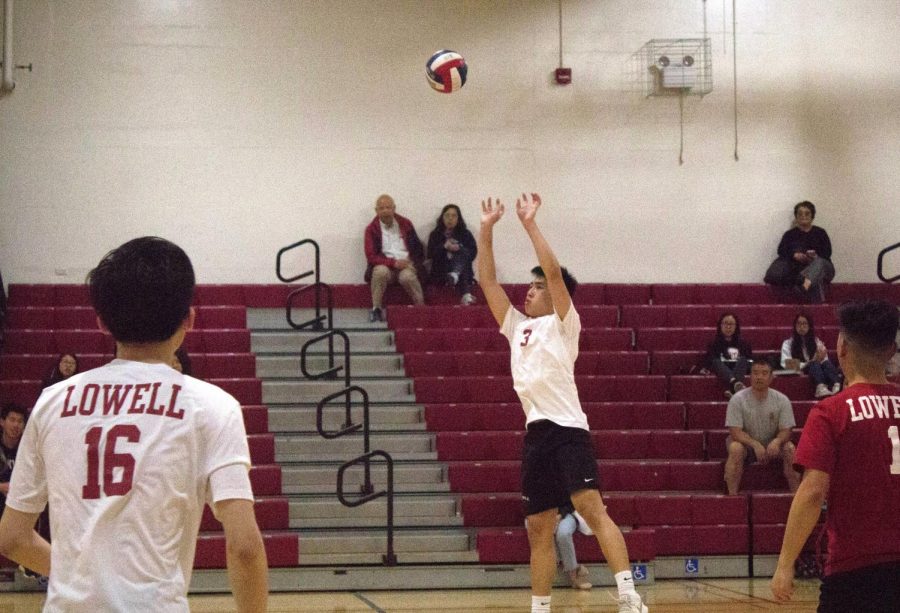 As his teammates attentively watch, junior right side hitter George Pan leaps for a hit against the Washington Eagles on April 10 at home.

Varsity boys volleyball continued their victory streak by winning the third game of the season against the Washington Eagles at home on April 10.

Lowell started the first set ahead and stayed in the lead throughout. Near the end of the set, Washington closed the gap and the two teams battled for the win.  After taking a break to regroup, Lowell finished the close match 25-23.

The second set also had a strong beginning for Lowell. Then Washington again made a revival in the last few points, only to be defeated by Lowell 25-22.

Reflecting on the game, sophomore outside hitter Brandon Bui feels that the team had a lack of energy despite of the strong start. However, Bui says as the team’s subconscious took over, and the last two games were played with more motivation.

Lowell dominated their third and last set.  Following their previous strategy, Washington caught up near the final points and stayed only one point behind. Ultimately, the game was won again by Lowell 25-21. Bui reflected on the game as mediocre.  “Overall, we did not play well today but we still won,” he said.

The Cardinals will advance into playoffs against the Lincoln Mustangs on May 8 at 5 p.m. at Lincoln.