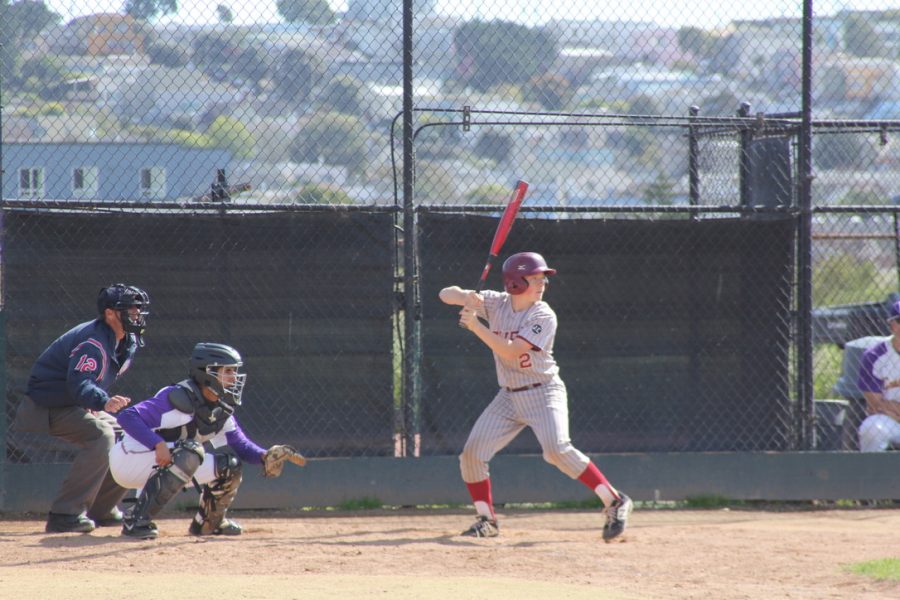 Sophomore catcher Shane Stanley attentively awaits for swinging a hit during the game against the Riordan Crusaders on April 16 at Archbishop Riordan High School.

The Lowell varsity baseball team beat the Riordan Crusaders 3-1 on April 16 at Archbishop Riordan High School for the first time in nearly a decade, according to head coach Daryl Semien. This match brings their total wins this season to 16 games.

The Cardinals started off the game strong, with junior outfielder Teo Koulias scoring immediately after the beginning of the first inning. Shortly after, sophomore infielder Jack Schonherr secured another run for Lowell, ending the first inning with Lowell up by 2-0.

While Lowell didn’t score any points during the second or third innings, the team maintained a  strong defense while Riordan continued to lag behind. During the fourth and most intense inning of the match, Lowell consistently scored singles while Riordan struck out within the first 15 minutes of the inning. Toward the end of the inning, Schonherr squeezed in a run for Lowell with the help of sophomore infielder Mark Zhu’s single.

The fifth and sixth innings ended quickly, with neither team scoring any points. During the seventh inning, Riordan managed to score one point, ending the game 3-1.

With five games in six days, the team encountered a lot of pressure to concentrate on winning this match, according to Semien. Even though Lowell hadn’t beat Riordan’s varsity baseball team in nearly a decade, senior center fielder Trey Chase felt confident in the team’s abilities. “This year, we’ve got a lot of swag to us, we’ve got a lot of poise, and it showed today in the dugout,” Chase said. “We were not scared at all, I think we were ready to take on this game.”

Semien felt proud of the team’s achievements. “We haven’t beaten Riordan in about eight or nine years, so it’s kind of a historic win,” Semien said. “It’s a good win to add on to the work that we’re trying to do to accomplish our goal to win the championship this year.”

The Cardinals lost their home game 2-1 against the Mission Bears on April 25 but defeated the El Camino Wildcats 5-0 on April 27. The team will compete in the playoffs on May 9 at Big Rec Graham Field.