It’s not just students: how UCs game the admissions system 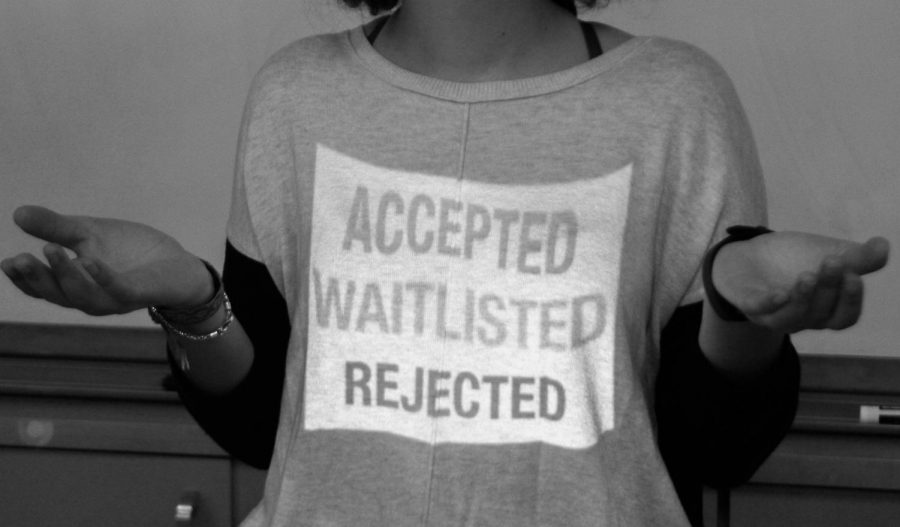 Senior Kelly Saldana was overqualified for UC Santa Cruz and UC San Diego, but underprepared for the shock she felt when she was waitlisted at both schools. Saldana was sure she had a secure place in the schools based on her test scores and grades, which were above the requirements of both schools. Many Lowell students applying to colleges this year felt similarly confident about their college resumes, and yet faced the same results as Saldana.

A reason that UCs might be waitlisting Lowell students is because of how much the universities value yield rates. Yield rates are the percentage of students that accept a college’s acceptance offer out of the total number that were offered a place at that school. Nationally, yield rates are a way colleges are ranked. A higher yield rate means more students want to attend, but it can also make colleges more selective about what students they accept. “I do know their admit rate and the publication of how good they look on a national level is really important to them, but I don’t think I could say or generalize that that’s what they value more,” Maria Aguirre said, Lowell’s college counselor. Aguirre hopes that UC schools are not waitlisting qualified applicants because they might be less likely to accept the offer, but can’t confirm or deny it with certainty. Out of the 165 Lowell students accepted by UC Santa Cruz in 2018, only 28 students enrolled. With such a low number of students from Lowell who apply actually enrolling, future applicants might be negatively affected by these results. “I can’t say, yes, they value yield rates more so than qualified students,” Aguirre said. “Maybe their numbers reflect that more than some other schools like if you look at their yield rate and who they are denying and admitting.” She doesn’t feel comfortable jumping to conclusions about how the UCs decide who to admit or deny.

Students, like Saldana, can struggle to understand why they get waitlisted at schools they expected to be accepted into. It can cause students to lose a sense of their academic worth. According to Saldana, she was qualified academically and based off current statistics she assumed that would lead to an immediate acceptance and was shocked when it did not. “Your self esteem will be knocked way down. When I got waitlisted at Santa Cruz, I was like, well there goes all my chances at other places,” Saldana said. Susan, a student who did not want her name used because of privacy concerns, had a similar reaction to Saldana after getting waitlisted at UC Santa Cruz. “I was surprised by Santa Cruz and San Diego because I had a chance there,” Susan said.

Susan feels the reason she was not accepted is largely because of the uniformity of many in-state residents’ applications, especially students from Lowell. “There’s a lot of the sameness even among people that are really qualified,” Susan said. “I think the UCs typically take kids from out of state because they can pay a lot more money, even though [the UCs] try to do less of that.” According to Ms. Aguirre, it is not because of being a California resident that students may be waitlisted; residents actually get priority. In most UCs, Aguirre says, the percentage of out-of-state students is below 25 percent. The main factor is balancing the acceptance qualified applicants and the universities’ goals as a school. “I think that one of their main goals is adding that diversity, adding that rich culture without not prioritizing California residents,” Aguirre said. For a school to entirely consist of California residents would take away from achieving diversity.

Saldana used UC Santa Cruz as a safety school, a school she could apply to in case she didn’t get accepted into any of her top picks. She was above the 75th percentile for grades and thought she would get in. “Not a lot was riding on me getting into Santa Cruz. I probably wasn’t actually going to go there; it was just a safety school, but I was kind of shocked when I got waitlisted because I was sure I was going to get in,” Saldana said. Still, students from Lowell who get waitlisted at UC Santa Cruz sometimes get accepted into more selective schools. According to Saldana, the schools she got accepted into, outside of the UC system, were harder to get into than UC Santa Cruz. In one case she was accepted into a school with only a 10 percent acceptance rate and a more rigorous application process. Aguirre has seen students get accepted into more statistically selective colleges. She thinks this is because students don’t really view many UCs, such as UC Santa Cruz, as actual options. “I’ve noticed that a lot of them are not really considering some of those schools as more realistic choices, they’re just applying for the sake of applying,” Aguirre said.

With colleges becoming more and more selective every year, the idea of using UC Santa Cruz and other traditionally easier-to-get-into UCs as safety schools can be detrimental. Some applicants, like Saldana, will not be hurt by being waitlisted, but future applicants can be hurt by the increasing number of applications made each year by students. Students are applying to a higher number of schools in hopes of getting in anywhere. “I wanted them for some security,” Susan said. Aguirre has noticed during her years as a college counselor that each year colleges are more selective with who they accept. She says that since the system of applying has changed with the advent of the Common Application, students are sending their application letters to around 35 schools. Before, they could only send out a certain amount of applications. “It’s a positive feedback loop because [fewer] people are getting into schools, they are applying to more and more schools, 20-25 schools, to get in somewhere, but increased applications lead to decreased acceptance rates so that just keeps going over and over again,” Saldana said. Considering most UCs as safety schools can hurt the students’ chances of getting accepted, and not just because of how many applicants there are to compete with. Aguirre agrees that the increase in college applications sent out by students has caused the already stressful process to become even harder. “Every year students are more easily able to apply to more schools so all the colleges are getting more applicants because of that which makes it more competitive,” Aguirre said.

With the increasingly competitive system, high numbers of applicants and the importance of yield rates are combined, there can be even more risks taken by colleges. These risks shape into the waitlist programs that the UC system has in place. Schools that waitlist students are playing a dangerous game of chance. According to Aguirre, students accept any and all waitlists they get offered so it can seem like they got into more schools while not actually wanting to attend that college. On the other hand, when students get waitlisted, and accept the waitlist, colleges are then able to accept them later if previously accepted students deny their spot in the school. Pulling students up from the waitlist pool can increase a colleges yield. When students are pulled up from the waitlist they are accepted into the college. The spot they are given makes it seem like colleges have a higher percentage of the students that accept a spot in their school out of the acceptance pool, and the more students that take that spot the higher the school’s yield. However, if the students that are pulled up from the waitlist do not accept their new spot, the school’s yield rate will not raise. This is because students in the waitlist pool that accept the schools waitlist may never plan on actually attending and are just using the waitlist to make it seem like they got accepted into a higher number of schools.“I think its a double-edged sword for both ways– the UCs and all the schools that offer waitlists. They’re playing games on both ends,” Aguirre said.

When dealing with the twists and turns of the UC system looking beyond your top five schools can help applicants. Just applying to a greater number of colleges can help your chances of getting accepted, but students recommend broadening the schools you apply to. According to Saldana, applying to schools where you may stand out or smaller colleges can help students have a higher chance of getting accepted. Aguirre also advises students to apply to schools that they actually want to attend and apply to smaller or non big-name schools, rather than applying just for the sake of applying. Focusing on popular schools can make them one of a higher number of applicants and those schools may not be the right fit. “I think students should really consider all their options and try to being their search by what they’re looking for in a university and what would help them do their best as an academic, they shouldn’t just apply to a school just because it has a brand name,” Aguirre said. Saldana expressed similar feelings. “Maybe you’ll be really proud about going to UCLA, but maybe it’s not the right place for you…There are thousands of colleges across this country and even abroad that you’ll have a better chance of getting into that you might have a better time at anyway,”Saldana said.