Cards secure their first win over the Lincoln Mustangs 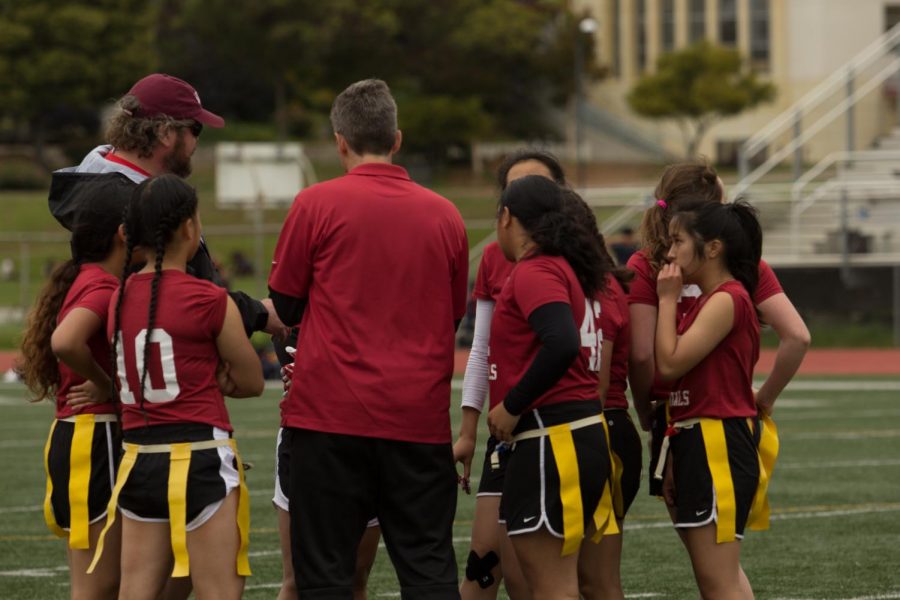 The offense huddled up in a time-out as their coaches call the next play.

Two little boys with matching bowlcuts chase each other down the bleachers, tripping through rows of seats and over their own feet. Their parents pay little mind to their sons’ playful antics; instead, they watch another game, one with higher stakes, playing out on the field before them.

Parents and students alike cheered on the Cardinals as they defeated the Lincoln Mustangs 14-0 on April 5 at home, securing their sixth win of the season. The Cardinals are currently ranked second in the league with a record of 8-2. This game was especially intense due to the longtime sports rivalry between Lincoln and Lowell. With the Lowell flag football team having never beaten Lincoln, the win was especially gratifying.

The Cardinals maintained a strong defense in the first quarter by preventing the Mustangs from getting close to the end zone. However, the offense was unable to score or gain significant yardage. Watching a failed deep pass from the sidelines, the coaches planned a shift in strategy that ultimately paid off. The coaches created new plays on the spot to attack and take advantage of the Lincoln defense. “We changed the game plan and it just caught them by surprise,” freshman wide receiver Heather Liu explained. “That was the high point. That’s when the game started going better.”

In the second quarter, the team maintained a tight defense while also building up their offense. The defense caught two interceptions that allowed the Cardinals to gain 25 yards. Although the Cardinals began to slowly advance toward the end zone, they did not score. Once the Cardinals regained possession of the ball, they made it near the end zone with a 10-yard pass, but were intercepted on their next down. The first half of the game ended 0-0.

In the third quarter, the Cardinals made an impressive 30-yard pass four minutes in. They ran the ball down five yards away from the end zone, senior wide receiver Joanne Flores securing their first touchdown of the game. The third quarter ended 6-0.

The fourth quarter started with sophomore inside receiver Madalynn Schmitt catching a pass in the end zone, and scoring another touchdown for the Cardinals. The Cardinals also scored the 2-point conversion, a feat senior co-captain and middle linebacker Arlynne Policarpio attributed to the team’s boost in morale after scoring. “Once we get that first score, we just have more momentum,” she said. According to senior co-captain and right linebacker Ericka Liu, the Mustangs’ growing frustration hurt them, and the Cardinals prevented them from getting anywhere near the end zone for the rest of the game.

Liu believes that the Cardinals performed especially well in this game because of the increased number of spectators and the added pressure of needing to make playoffs. “For all of our years at Lowell, we’ve never beaten Lincoln, so especially for the seniors we really wanted it,” she said. “We wanted to win for them [the crowd],” Policarpio added. “When they’re there, you want to win to make it worth their time.”

On April 8, the Cardinals lost 12-7 to the Mission Bears. On April 10, the Cardinals defeated the Marshall Phoenixes 14-6 on senior night, and on April 12, they beat the formerly undefeated Galileo Lions, 14-0.

The Cardinals lost to the Balboa Buccaneers 13-0 in the playoffs on April 16, ending their season with an overall 8-3 record.