Students walk out to advocate for Green New Deal 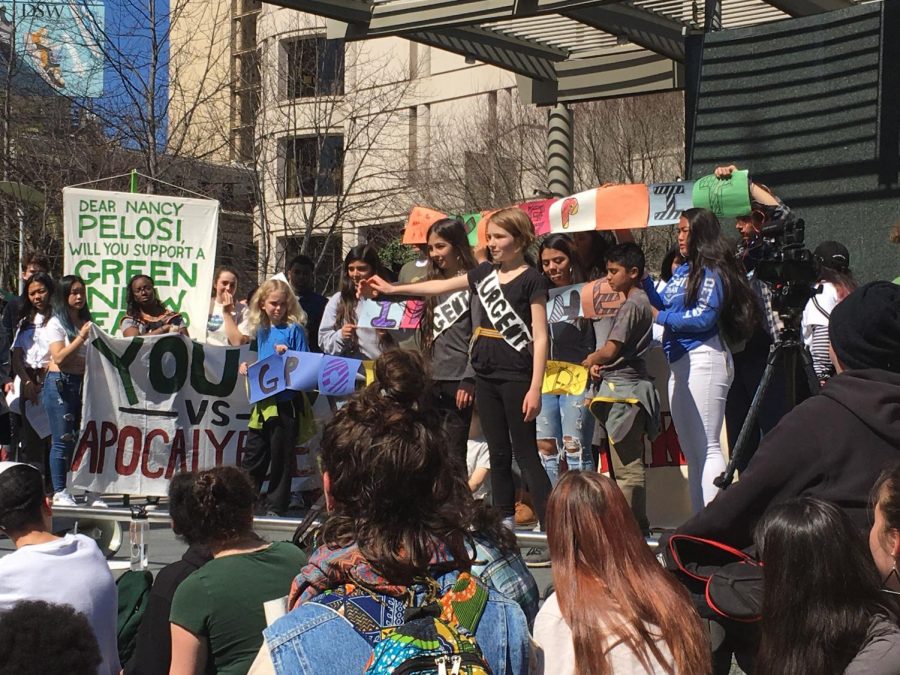 The protesters congregated in Union Square where speeches and performances were delivered.

“No coal, no way! Not tomorrow, not today!” chanted a crowd of students holding brightly colored signs outside of Speaker of the House Nancy Pelosi’s office.

On the morning of March 15, around 20 Lowell students gathered outside of Lowell High School and headed downtown to join over 1,000 students from schools across the Bay Area and many more youth across the world in skipping school for the Youth Climate Strike.

The students marched to representative Pelosi and senator Dianne Feinstein’s office to demand their vote for The New Green Deal. The bill, proposed by representative Alexandria Ocasio Cortez and senator Ed Markey, includes a shift to 100 percent sustainable energy by 2030, a promise to create more ethical jobs and a move towards more racial equality to fully combat the issue of climate change. 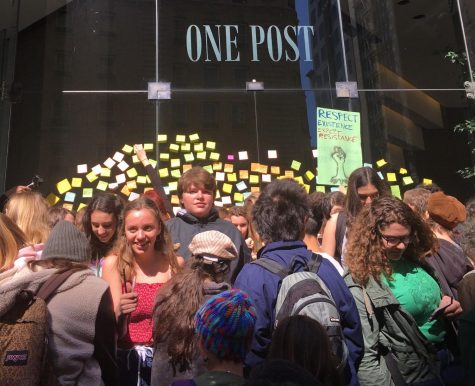 Olivia Sohn Protesters leave post it notes with messages for senator Dianne Feinstein outside of her office.

The Youth Climate Strike was inspired by Greta Thunberg, a 16-year-old activist from Sweden who started the movement #FridaysforFuture, encouraging students to go on a climate strike every Friday outside of their closest town halls. Youth vs. Apocalypse, a Bay Area youth activist group fighting for environmental equality, organized this strike in San Francisco.
One member, sophomore Nadja Goldberg at Ruth Asawa San Francisco School of the Arts, had heard about this global climate strike and seeing that there was no one leading it in San Francisco, decided to step up and take charge. Goldberg believes that climate change is on the minds of many people in her generation, so she thought that this walkout would be a good way to express that, and from then forward, she and Lowell senior Kristen Tam dove into organizing the strike.

Tam is the co-president of the Lowell ecoclub in addition to being a member of Youth vs. Apocalypse. She envisions a world where one’s race or socioeconomic status is not a barrier to living more sustainably, “where low-income families and communities of colors are not being the most polluted and the most oppressed,” Tam said. She hopes that people will be mindful consumers, who make sure that everything we buy is made ethically, meeting labor standards, fair trade, and is organic, “so that how we’re buying and creating things is good for the planet, good for our lives, and the lives of the workers for creating a sustainable future,” Tam said. She wants to see a world where homes and vacation places are not being destroyed by climate change through flooding from sea level rise, increasingly more dangerous and intense forest fires, and storms as we are already starting to see today.

One marcher, senior Sofia Herron-Geller, felt that this international strike was a lot more important than a day of school. “It’s definitely a Lowell culture to be scared to miss something and I’ve definitely not gone to something because I had a super important test or presentation,” she said. It was the first time Herron-Geller went to a strike this big. “It was inspiring, like ‘oh there are other people at Lowell who are really passionate about change,” she said. 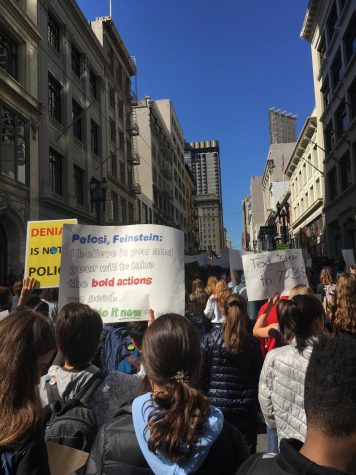 The march took lots of planning to prepare and finalize. Goldberg, Tam, and their coworkers spent many late-night phone calls discussing the route, safety and logistics, the lineup of speakers, and ways to get the word out. Goldberg said that she didn’t expect over one thousand people to show up, and found the unexpected outcome very encouraging.

Tam described seeing the overwhelming number of people when she got to Pelosi’s office: “It was chaotic but that was a good thing because I felt the energy and just the crazy energy of all the youth coming together holding up all of their amazingly beautiful signs, screaming, along with the chants, drumming drums, it was…just powerful.”

Tam said that she and other youth were marching for their future, for their voices to be heard about the necessity for serious climate legislation. “The climate emergency is real and there’s so much power in student youth activism. Just the opportunity to meet with and walk alongside youth from all across the bay area who are serious about demanding a better future was empowering,” she said.

Tam feels that a lot of people are at the phase where they’re burnt out on environmentalism, and lose hope thinking that their actions don’t make a difference anymore. At times, Tam feels this way as well, but stays unfazed, and said, “I feel like I have a fire inside of me, I still have hope and I have a drive to want to use the time that’s left to help make a difference and impact.”

Though major climate catastrophe may feel inevitable at this point in time, according to the UN, with 11 years left before the point of no return and the effect this climate strike had on influencing policy is unknown, there is no doubt that the eager youth who came out on this day are already young activists who are ready to tackle climate change in the near future.