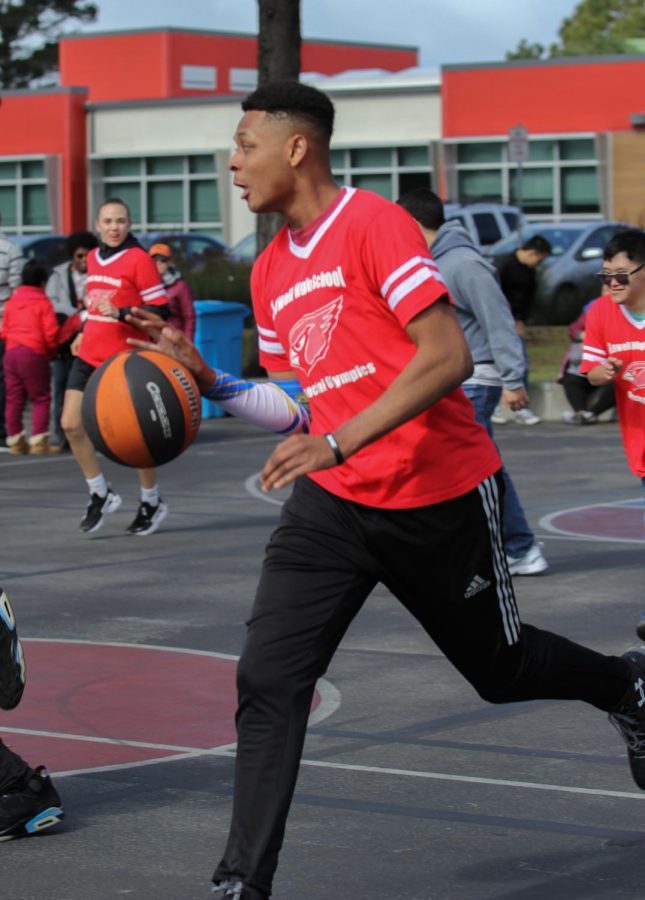 Sophomore Roy Palmer dribbles down the court during a Special Olympics basketball tournament.

“It’s about respect, acceptance and building inclusion for all students on campus- not just for those with special needs,” previous Lowell physical education teacher and current Special Olympics Event Coordinator Michael Prutz said when describing the purpose of the annual Special Olympics basketball tournament. “The reality is we all need respect, acceptance and friendship in a more socially inclusive school environment.” Lowell High School held this tournament, hosting schools from all over San Francisco, on March 13.

The event hosted 863 students city wide, from elementary, middle and high schools. These teams all competed in a basketball tournament, led by Prutz. Basketball is only one of the sports that the Special Olympic athletes compete in, with track and field and soccer events also taking place on other dates.

The Special Olympics program spread to SFUSD in 2007. The first year of the program had 104 Special Olympic athletes compete, according to senior manager for the Urban Schools and Youth Programs, Schools Partnership Program Sasha Trope. Last year, the program expanded to involve additional schools from the district, and saw 2,891 athletes.

Prutz started to take over the event in 2016, when the Special Olympics were placed under the Physical Education District office duties. “I would volunteer my classes to assist with the events in various capacities,” Prutz stated. “I [also] worked in collaboration with SF State students in designing and modifying the stations so they could reach the maximum number of special needs students.”

Prutz started his new position as the Special Olympics Event Coordinator for SFUSD at the beginning of this year. He runs these tournaments all over the district year round for both students in the special education program and any students in general education who want to  volunteer.

One of these student volunteers is senior Devyn Gallagher. Gallagher is the president of the Best Buddies Club, which helps create friendships between special-education students and gen-ed students, while spreading awareness about the stereotypes around the special education program. Gallagher volunteered as a cheerleader for the athletes in the tournament.

The Best Buddies Club recognizes the stigma around aspects of special education, and works to help remove these stereotypes. On March 14, the club hosted an event to stop the use of the R word, in  an attempt to educate students at Lowell.

Both Prutz and Gallagher wanted to remind students at Lowell that they can step up and volunteer for these events. Gallagher believes that the lack of awareness of this opportunity to volunteer is due to the stigma around people who have disabilities that her club addresses. “I feel like it is especially hard to get people involved with this just because I think people are scared of being with people with disabilities,” Gallagher said. “They can’t predict what is going to happen.” While these prejudices exist, Prutz believes that these district-wide events bring joy to special education and general education students in San Francisco.