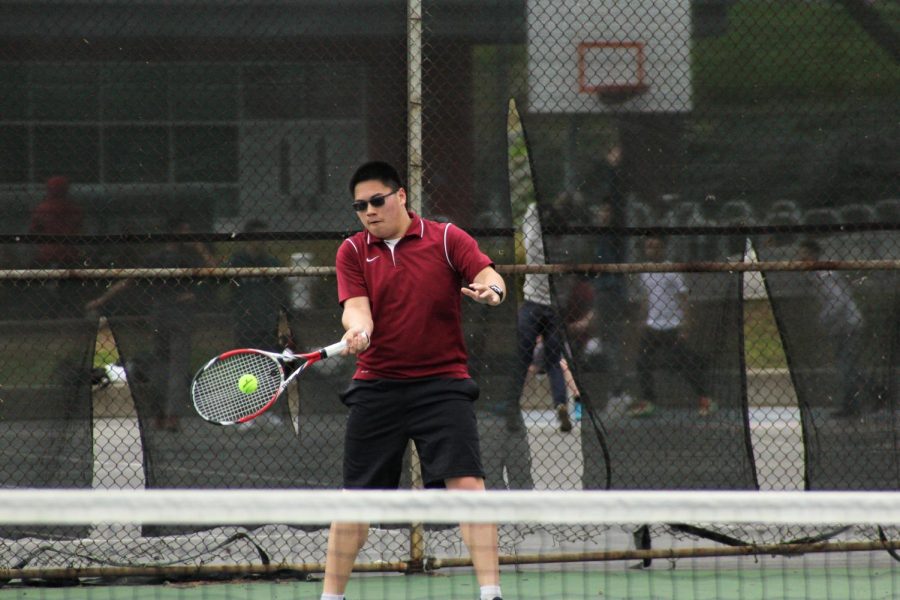 A Cardinal returns a furious shot from the Lincoln Mustangs with a volley during the game on April 3 at home.

The varsity boys tennis team defeated the Lincoln Mustangs 7-0 on April 3 at Lowell. This is their sixth consecutive win of the season. They are currently ranked first in the Academic Athletic Association league (AAA/CIFSF).

In the singles division, sophomores Angus Wong and MJ. Medina had a competitive match, with Wong winning the first game 6-3 and the second game 6-1. Following them, senior Nathan Ng beat Malik Johnson 6-2 and 6-1, and sophomore Jacob Beltran won 6-0 and 6-2, respectively. Junior Joshua Wong’s match, lasting for the longest amount of time, finished strong with 6-2 and 6-0.

In the doubles division, senior co-captains Eli Ganz and Nick Morgenstein finished off their match with scores of 6-1 and 6-0. Freshman partners Jonathan Chen and Jonathan Fu, and junior James Olson and freshman Arlo Novicoff also emerged victorious with scores 6-1 and 6-0.

Ganz and Morgenstein, team captains this year, have been friends for two years now and share a strong bond. According to the two captains, they feel confident in their ability to continue the winning streak that the team has maintained for the past 10+ years. Ganz described one of their strategies for achieving this as “aggressivity.” “It’s like being aggressive with velocity,” he said. “It’s about the energy, and the thing with aggressivity is that it helps with your tennis but also it’s an intimidation tactic,” Ganz explained.

Coming up to the end of the season, the Cardinals will be playing the Galileo Lions at 3:30 p.m. on April 18 at home.