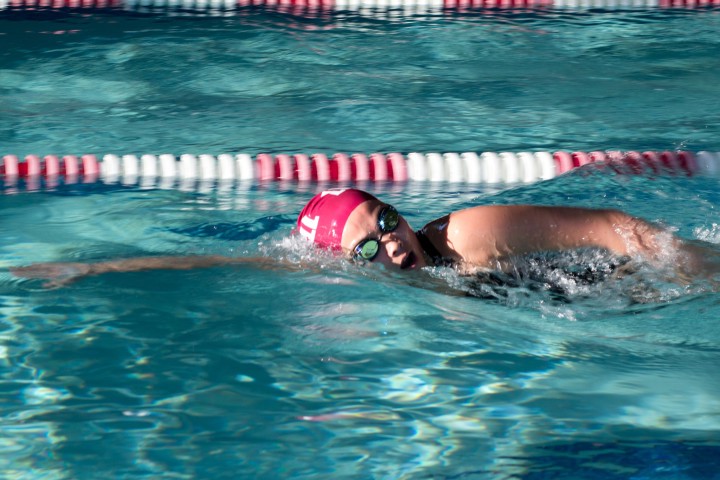 A Lowell swimmer competes during the meet against the Lincoln Mustangs on March 6. The Cardinals out-swam the Mustangs in all four of the teams: JV boys won 79–51, JV girls won 115–31, varsity boys won 129–15 and varsity girls won 108–48. Photo by Aida Irving

With changes in their coaching staff, the swim team dives into this season with a fresh attitude, focusing on creating a positive community of motivated swimmers.

Seniors Amanda Bui and Matthew Kim are making efforts to create a supportive environment in and out of the water after seeing a need for change. “Last season there was some exclusion and it definitely created a bit of drama,” Kim said. “I feel like a lot of swimmers were discouraged because they weren’t included. A lot of people didn’t come back this year and we’re trying to change that.”

“Swimming can get repetitive and socializing is an incentive to come to practice.”

“Swimming can get repetitive and socializing is an incentive to come to practice. If someone feels like they’re not included they won’t want to come,” Kim said.“If someone isn’t feeling well one day, we try to just give them some positive encouragement and help them to enjoy the sport more and have fun with it.”

Outside of practice, the captains plan gatherings to bring the team together, such as meeting at the beach or holding barbecues.

Several new coaches are also joining the team this season. New assistant coach Roselin Sretpisalsilp joins returning assistant coach Stanton Huang. Head coach Cory Vo replaces former head coach Jonathan Riley after being an assistant coach the previous season. “[Riley] was there when we first started so it felt like losing a parent,” Bui said. “But I think we’ve adjusted well. He has gotten into the groove and he definitely has his own way of running things.”

Junior Brandon Chiu swims the backstroke at the meet. Photo by Aida Irving

According to Kim, Vo pushes the team to work harder for this year’s statewide swimming competition, which is a challenging first-time opportunity the team hopes to qualify for. “Basically, every year we have our San Francisco city meets where the top swimmers compete and place for medals,” Kim said. “This year, going off of that, the top winners of each event will be going [to State]. There are 10 different districts in California and they’re taking the average of all 8th place swimmers and making that the qualifying time [to place.]”

“Since our team is so big, everyday we are always competing against each other and that helps us get better”

In order to prepare for the state competition and other meets, the swimmers are going back to basics. “We want the new swimmers to build their foundation in endurance and strength,” Bui said. “Technique is also so important. I try to focus on it throughout the entire practice by picking a different thing to focus on during each set, like breathing patterns, underwater work, rotation and overall smoothness. Practice is also the time to play around with new technique to see what works and what doesn’t.”

Luckily, the team is already well-rounded. “We have a lot of swimmers who are good in different events,” Bui said. “We have distance swimmers, sprinters and specialty strokers. A lot of other teams don’t have that well-roundedness, and this makes us better competitors overall.”

In addition, strength in numbers is a key part of the team’s success. “Since our team is so big, everyday we are always competing against each other and that helps us get better, whereas in other teams there aren’t as many people to practice against,” Kim said.

The Cardinals’ next meet will be against the Mission Bears at King Pool at 4 p.m. on March 27. As of March 23, both girls and boys JV and varsity have undefeated records.