Undefeated: Fencing team ranked number one in the league 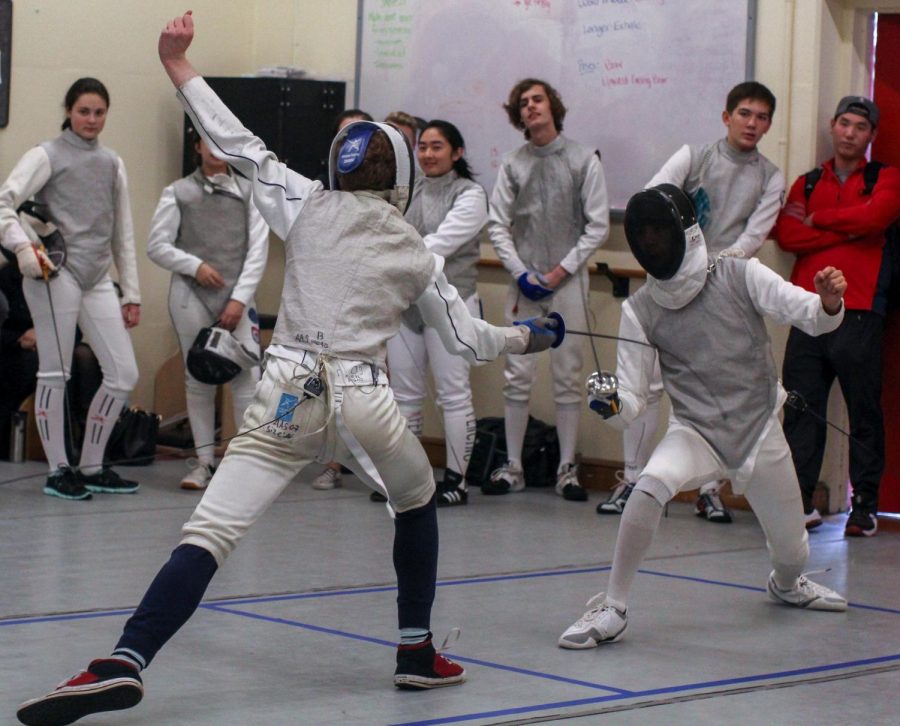 Junior Jonas Castillo performs a parry to defend himself against his opponent.

The fencing team retained their victory streaks against both the Academy Wolves and the Convent Cubs and Stuart Hall Dragons on March 5 and March 7, respectively, both at Lowell. Winning 15 bouts to Academy’s three, and going undefeated against Convent, Lowell had little trouble tying down their victories. Stuart Hall, however, was a greater challenge, although Lowell still finished with six bouts over the Dragons.

Even though Lowell consistently beat the Wolves since they began in 2014, this time, the Cardinals had a little concern over Tuesday’s match. The Wolves’ assistant coach had previously been a Cardinal fencer, so it was possible that he could share Lowell’s strategies with them, girls’ co-captain Esme Cohen said.

The Cardinal boys began with a smooth 5-0 win, and would get four more as the bouts went on. The girls had a slightly harder time, with the Wolves usually getting one to two points before being beaten by Lowell. However, the varsity girls had only one loss compared to the boys’ two–one of which was lost by time running out.

Like with Academy, while the Cardinals have only lost to Stuart Hall once in 2013, head coach Scott Cunningham was still slightly worried about one opposing fencer. “Over the many years, they’ve had a couple guys who were pretty tough, but they never had anybody to support them, so you know, one guy’s not enough,” Cunningham said. “It was all a question of whether all my guys could overcome Lance Tam.” Tam, a former trainee of Cunningham, won two bouts against Lowell. Senior boys’ co-captain Raymond McMillan and junior Jonas Castillo were both excited to fence Tam specifically, despite knowing of his skill. “I want to destroy my friend Lance,” Castillo said.

The Cardinal girls’ strategy was to “hit [Convent’s fencers] hard and fast,” rather than save the best for last in an “anchor” position as they usually do, Cunningham said. Fortunately for the Cardinals, Lowell took every bout, with most ending at 5-1 or 5-2.

Next, Lowell will be fencing the Lincoln Mustangs at Lincoln on March 18, beginning at 3:30 p.m.