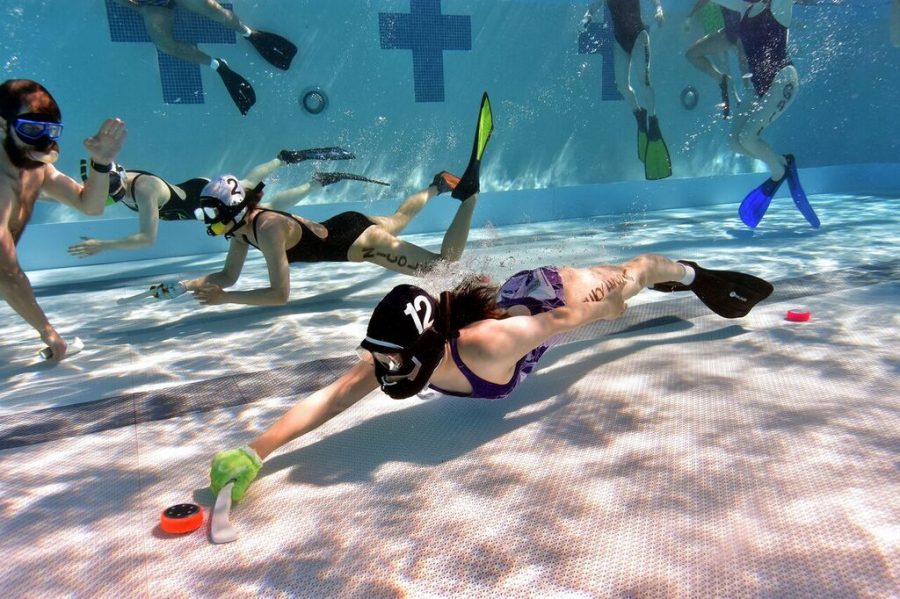 When sophomore Sydney Li told her biology class that she played underwater hockey, she was met with confusion. “[The teacher] said, ‘Underwater hockey?!’ and then everyone turned to me and looked at me weirdly,” Li said. “Ever since then, everyone has known me as ‘Underwater Hockey Girl.’”

Like Li’s classmates, not many Lowell students know about underwater hockey, but through dedicated student athletes and exposure via the P.E. swimming class, it is becoming more well known throughout the Lowell community.

Though underwater hockey is an unusual sport to play, it is not hard to understand as it is derived from regular hockey. Junior Teresa Lee, who also plays for the San Francisco Sea Lions, describes underwater hockey as having the same rules as hockey; however, it has the twist of being played underwater. Two teams of six compete in the depths of a swimming pool, trying to maneuver a weighted puck into the opposing team’s goal. Each player is armed with a glove, a stick, and a mask, and their equipment is either black or white to help differentiate the teams underwater. In addition, they wear snorkels, but since the pool is eight to ten feet deep, they have to hold their breath most of the time, and the snorkels are only used to get a breath quickly when close to the surface.

San Francisco Sea Lions players practice a lot to improve their performance. Endurance is very important. During practices, time is spent improving the players’ ability to swim long distances underwater quickly without coming up for air. “Our coach would tell us to swim halfway across the pool above water and halfway below to water and he makes us do hundreds [of meters],” Teresa Lee said. In addition to endurance, an elite underwater hockey player is also agile, has good breath control and lots of upper body strength to fight for the puck.

Along with endurance, a team’s communication skills need to be built as well. Since underwater hockey is almost entirely played underwater, there is little to no verbal communication between players. “You have to know your teammates really well,” Li said. “The only communication you can really do is knocking on the pool.” According to Li, this knocking allows the player with the puck to know where their teammates are so they can pass the puck.

Even though the sport is becoming more well known, much of the Lowell community is still unaware of underwater hockey. According to Teresa Lee, this is because the sport is more commonly played in places like Australia and New Zealand, where freediving is a common hobby. Li doesn’t talk about the sport very much with her classmates. According to Li, it doesn’t come up in conversation very often, and when it does come up she has to explain what the sport is. Sophomore Justin takes different route and tries to spread awareness by wearing underwater hockey shirts and a wristband, as well as by showing his friends pictures and videos of the sport.

Though Justin’s friends have learned about underwater hockey from him, other Lowell students have access to it through the P.E. swimming class. P.E. teacher Terence Doherty teaches underwater hockey as a unit in his swimming class. According to Doherty, the game was introduced to the class a few years ago by a former student of his, and has made a good addition to the class. He likes that skills needed to play underwater hockey are fairly basic. “One of the good things is that with a small amount of instruction you can get a basic game that can be fun even for players that would be considered low level in terms of their skills,” Doherty said. However, Doherty has noticed that it can be difficult for some students to stay down at the bottom of the pool long enough to move the puck significantly, which can make the game more challenging.

Doherty also appreciates that underwater hockey is a welcome change from the normal class activities. “Most of the time in swim class we do a lot of laps and drills and we work on techniques and swimming strokes so this one is little bit more team-oriented,” Doherty said. “There’s a little bit more laughter and they’re like, ‘Oh that’s a really great play’ or ‘Let’s try to do something different next time,’ so team strategy comes into play a little bit more.”