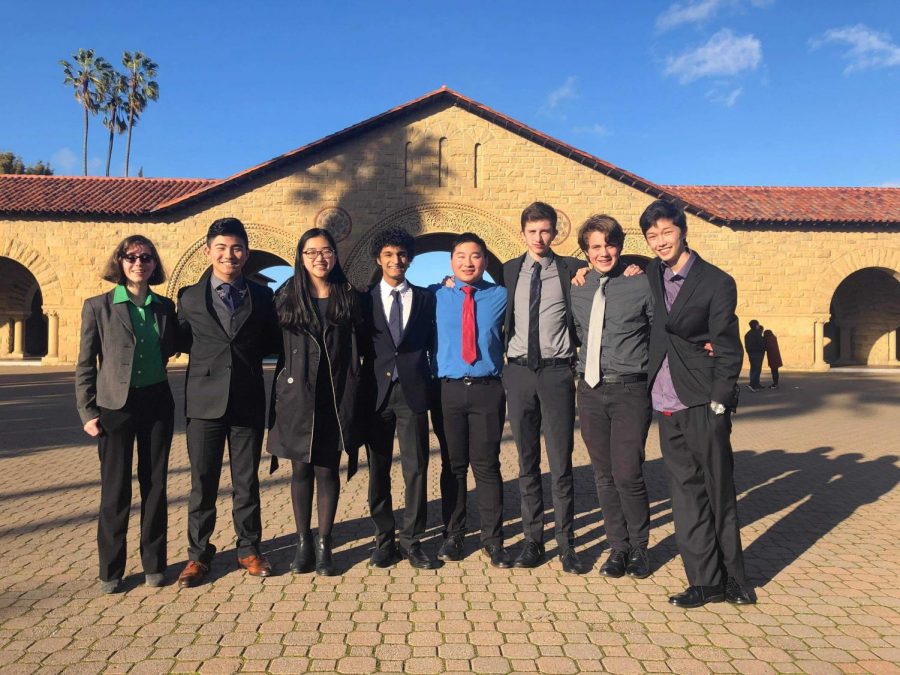 The parliamentary debate team before the start of the tournament.

On a Saturday at Stanford, Lowell’s top parliamentary and policy debaters wait nervously. They are about to go head-to-head with great debaters from all over the world.

From February 9 to 11, seven Lowell debate teams competed at the 33rd Annual Stanford Invitational. The tournament had both a policy division and a parliamentary division, and teams competed in both categories. During the first two days of the tournament, each team participated in six initial rounds, and all teams that got a 4-2 record or better moved on to elimination rounds.

Policy is a research-focused style of debate, where one topic is researched and then debated all year. This year’s topic is legal immigration to the United States. Parliamentary debate is more impromptu, as teams have no idea what topics are going to be debated until they are announced 20 minutes before the debate starts. Teams then have to come up with their arguments in those 20 minutes.

Juniors Sarah Berman and Zoe Rosenberg, policy debaters, won all six of their initial rounds. “We were the top seed because we had the highest speaker points at the tournament. So, we were pretty excited going into elimination rounds,” Berman said. Unfortunately, they then lost during second elimination round. Though they were a little disappointed that they didn’t advance further, Berman is encouraged by their performance at the Stanford tournament. “We’re really motivated now that we did decently at Stanford,” she said. “We think that we have a shot at being pretty successful next year if we put in the time and effort.” To prepare for next year, Berman plans to use the rest of this year to do lots of practice speeches, as well as begin researching next year’s topic.

According to Tokarzewski, the main reason they lost was because the team they went up against in quarterfinals used “spreading,” where speakers speak as fast as possible so that they can bring up more arguments, a tactic not usually used in parliamentary debate. “We had trouble writing down all of their arguments and then coming up with refutations before their speech was up, because as soon as their speech ends we’re supposed to stand up and give our speech,” Tokarzewski said. Though the tactic is effective, Tokarzewski does not think it should be used in parliamentary debate. “It’s just a sad day when parliamentary debate stops being about the quality of the arguments and just whoever can move their lips the fastest,” she said. According to Tokarzewski, the debate team is planning on practicing so that in the future, if they face spreading in a round, they will be ready.

Both Berman and Tokarzewski are planning to use the rest of the year to mentor less experienced members of Lowell debate. “We’re going to be paying more attention to the novices, watching rounds, giving feedback to make the team as a whole better,” Berman said. Tokarzewski expressed similar sentiments. “We’ve been trying to focus as much as possible on junior varsity and novice, so that by the time they reach our level, they will be able to hit teams like [the team we lost to] and beat them,” she said.