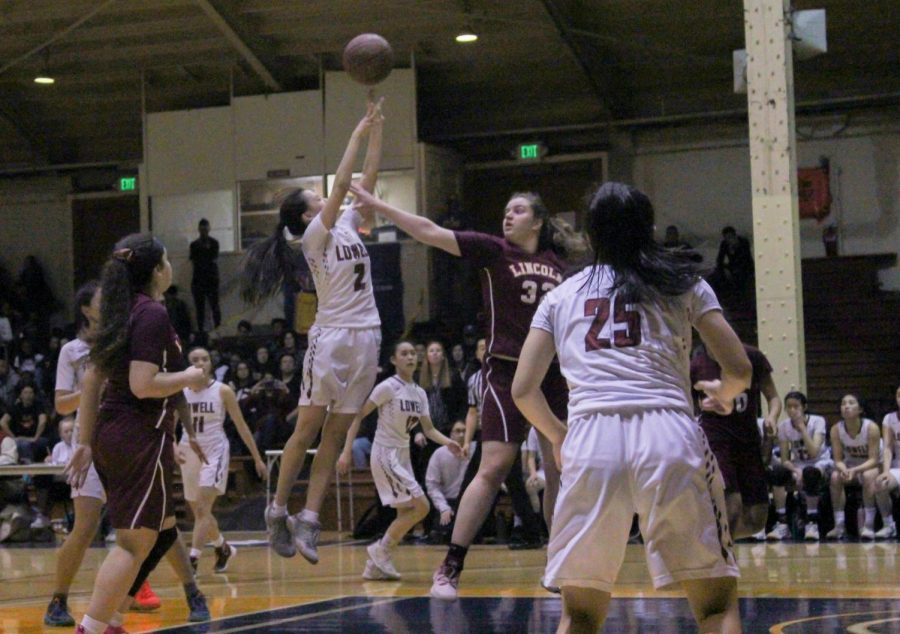 Senior KD Lee takes a shot at the basket as a Mustang tries to block her.

With cheers coming from fans after every point, the varsity girls basketball team closely defeated the Lincoln Mustangs 49-43 and reclaimed the Academic Athletic Association (AAA) championship title for the first time since 2015 on Feb. 22 at Kezar Pavilion.

Prior to this championship game, the Lady Cards played the Lady Mustangs twice in the regular season, only winning one of the two games. According to senior co-captain and guard Lauren Chan, the team was able to use those two games to help prepare. “We knew which players were key on Lincoln and we knew that we had to come out wanting the ball and come out strong,” Chan said. “We guarded some players more closely and tried to not let certain players shoot.” The team also had a new mentality in which they would play for their younger selves, the person that fell in love with the game. In addition, senior guard Aly Lee said the team aimed to “play four complete quarters and being able to keep playing the next play and the next play, even when we mess up.”

The first quarter was intense. The scoring gap between the Cards and the Mustangs tightened as they began to alternate ball possession. Both teams showed a strong defense, as well as quick drives on offense. The Cardinals were down the first quarter with the close score of 14-15.

As the second quarter progressed, both teams continued to stay strong and take turns scoring. Halfway through the quarter, senior co-captain and guard Katelyn “KD” Lee and senior guard Crystal Luu scored two consecutive shots, bringing the team ahead by four points. However, the Mustangs were quick to get back on their feet and scored four points to even the score with the Cards. In the last seconds of the quarter, a Mustang player was fouled, allowing Lincoln the opportunity to gain two more points and break the tie. By the end of the first half, the Cards were still behind 24-26.

At the start of the third quarter, Aly Lee made the first points tying the score again. After a few alternating plays, Luu broke the tie and KD Lee brought the team further in the lead. The Mustangs followed suit and picked up their pace, scoring six consecutive points. Senior guard Tomi Eijima and KD Lee were able to break through their opponents’ strong defense and ended the third quarter on top with a score of 36-34.

In the final quarter, the Cards were confident of their chance at winning the section title. They played a stronger defense and began to score consecutive points. Many attempts to score from the Mustangs were unsuccessful, they only scored nine points, whereas the Cardinals were able to score 13. In the end, the Lady Cards secured the win after an intense match of back and forth play and the AAA championship title with a score of 49-43.

Last season, the Cardinals were crushed by the Mustangs 25-41 in the championship match, so Lowell coaches and players were especially happy with the result. “It feels really good [to reclaim the championship title]; I have no vocabulary to describe it,” Head coach Matthew Magsanay said. “I’m really proud of the players and the way that they played today, that they came with a lot of hustle, they came with a lot of aggressiveness and that’s what we’re looking for.” KD Lee agreed with Magsanay. “I think we had a lot of people step up, a lot of people who brought the energy, and I’m proud of how we played,” she said.