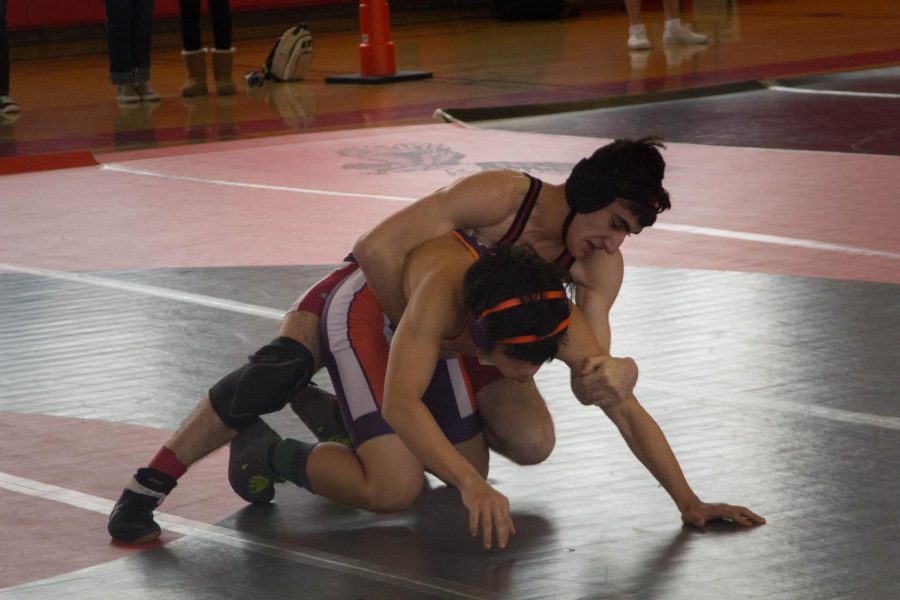 Senior Slavik Gevorkyan (126), pinned down his opponent, Titikor Paisansiri from Galileo, in 3:30.

The wrestling team competed in the annual All-City Tournament at George Washington High School on Saturday, Feb. 9. They headed into the tournament in the morning with an undefeated 5-0 streak in the regular season. However, something was different for the team. Last season’s head coach Michael Wise had stepped down and assistant coach Jaime Cruz had stepped in as the new head coach for the upcoming year. The Cardinals now faced this new challenge for the season, but still held the All-City Tournament in their sights.

The day’s preliminary rounds featured individual wrestlers competing in their own weight class brackets. Eleven Cardinals fought through individual brackets but only six wrestlers were able to move into the finals. Led by senior co-captains Giovanni Thai and Jonah Nascimento, the remaining six continued forward with the hopes of winning gold and more importantly, qualify for the state championships.

First up, representing the Cardinals, was senior co-captain Giovanni Thai (120), competing against Gustavo Magana of San Francisco International. While putting on his red ankle band, coach Jaime reminded him to “Have fun!” The whistle blew and Thai aimed for an immediate takedown targeting his opponent’s left leg and grabbing points for a takedown. Thai took early control, forcing his Magana to run out of bounds on multiple near pins and takedowns. As the second period started, Thai was able to continue his control, gaining two points out of a reversal from his down position. According to Cruz, the co-captain’s strategy was, “hit and go,”  as he was hoping to wear down his opponent and open an opportunity for a pin. Thai was unable to pin his opponent but finished the third period with a score of 10-0, securing the first place medal of his weight division.

Next up was Slavik Gevorkyan (126), who met Titikor Paisansiri from Galileo in the center of the mat. Gevorkyan slowly gained momentum by winning small struggles. A couple of takedowns put Gevorkyan in the lead, but an escape by Paisansiri shortened the advantage he had gained. In the second period, Gevorkyan was able to use momentum gained from his takedowns and near pins to take full control, leading to his victory by pin.

The announcer soon called up senior co-captain Jonah Nascimento (138). In the preliminary rounds, Nascimento was dominant in his weight class, with all victoires by pin, but his opponent, Vladimir Al-Gohem of San Francisco International, would give him a run for his money in this match. Nascimento opened with an aggressive attempt to takedown his opponent, who negated his efforts by pushing Nascimento out of bounds. This trend continued as Nascimento repeatedly took down his opponent who was just barely able to escape near pins. Again, they wrestled out of bounds and started at the center in a neutral position. Nascimento was able to get on top and the crowd encouraged him to just wait out the clock, but it was to no avail. With seconds left, Nascimento pinned his opponent and had his arm raised by the referee, winning the match in 1:39.

Following Nascimento was the shortest match of the day. Lone junior Michael Ryaboy met his opponent with determination on his face. A quick takedown and near pin set the tone of the match. Soon after, Ryaboy had pinned his Galileo opponent after only forty-two seconds of the two minute period.

Then came Jalen Ng (152), who greeted another Galileo competitor on the center mat. From the start, Ng also attempted to aim for his opponents leg for a quick takedown. Ng held the momentum as his opponent scrambled to run out of bounds. Both wrestlers were slow to meet back in the center, with Ng holding his right leg and his opponent still on the floor. Ng fought through his leg strains and regained control. At the end of the first period, he was just inches away from putting his competitor on his back and gaining the pin, but the clock drained to zero and it was time to go into the second period. Again, Ng held his leg in discomfort but pushed forward, pinning the Lion in the first minute of the period.

Last up was senior Max Song (170), who faced yet another Galileo opponent, Alexander Harrington. The period started with a fight for control, and both wrestlers wanted to gain the first ounce of momentum. Song managed to gain the upperhand with many takedowns and a few near pins, but this was not enough to secure a pin in the first period. As the second period started, Song started in the top position. “Flatten him out!” assistant coach Micky Meija shouted. Song kept his opponent in his arms, not allowing the Lion to gain an escape point. Finally, Song secured the pin, which marked the last chance for Lowell to gain more team points. The crowd was unsure which team was in the lead. Then the speaker announced that Galileo was in second with 175 points and Lowell was in first with 176 points. The Cardinals finally led in team points, but knew that they were most likely going to lose the first place spot, due to the number of Galileo wrestlers still waiting to duel. As predicted, Lowell came in second to the Galileo Lions, but all of the Cardinal finalists won gold in their weight divisions and secured their spot for the state tournament. “It was really cool to see their hand raised and run off and smile, jumping in the air, so that was probably the best moment.” Cruz said.

Lowell’s victories have come despite the team facing many challenges throughout the season; the biggest challenge being the coaching change. “The transition was rough in the beginning just because we did not know what to expect but, I think we adapted really well and made the most of our experience,” Nascimento said. Thai adds, “Coach Wise had a very traditional style of training and conditioning. Coach Cruz is still fairly young, so he is on the mat scrapping with us, he’s pushing us to the brink.”

Not only was the transition hard on the athletes, but it was also difficult for coach Jaime Cruz. “It was a night-and-day difference going from an assistant coach to a head coach, it’s a whole other world,” he explained, “[with] tons of administrative work I had no idea I had to do. But with the help of the former head coach, coach Wise, I was able to get a feel for it.” Through these difficulties, the team’s regular season can be considered a success with all finalists qualifying for the state championship and a second place team finish at All-City, one podium place higher than last season.