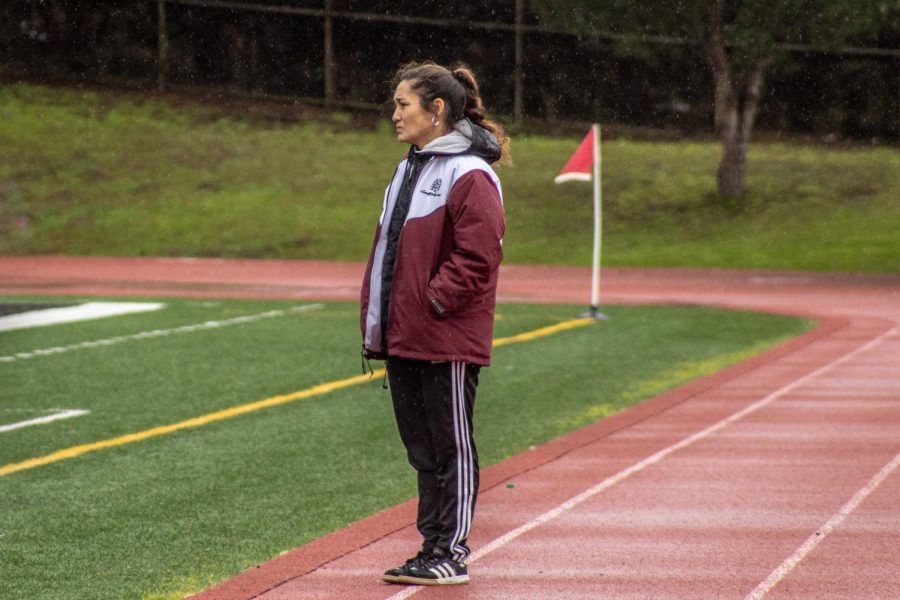 Amber Wilson was only an assistant coach for Lowell’s varsity girls soccer team for one year before she became the head coach.

San Francisco native, Lowell academic counselor and new head coach of the varsity girls’ soccer team Amber Wilson has had a passion for soccer since her father taught her to play the game when she was just five years old. At the time, there were no all-girls soccer teams in San Francisco, so she and two other girls joined what had been an all-boys team. By the time she started high school at St. Ignatius College Preparatory in 1991, things had changed for female athletes. The formerly all-boys Catholic school was now co-ed, with an all-girls soccer team, which Wilson was selected to play on.

Four years later, as a freshman at the University of San Diego, Wilson garnered the one open spot on the school’s women’s soccer team. In 1997, post-graduation and back in her hometown, Wilson joined the San Francisco Nighthawks, a team in the Women’s Premier Soccer League, where she played until 2015.

Fast forward to 2019, and Wilson is using what she learned during her three decades of playing the game with the goal of leading Lowell’s team to its 22nd consecutive Academic Athletic Association championship.

Wilson is well aware that she has some large cleats to fill, replacing long-time head coach Eugene Vrana, who retired from the position at the end of last season and is now assistant coach for the team. In 2018, Vrana was named the California Small Schools Coach of the Year by the United Soccer Coaches Association and also led the team to their first-ever Northern California championship.

An academic counselor at Lowell since 2016, Wilson had just one year under her belt as the team’s assistant coach when Vrana decided to step down. “[Coach Vrana] has expressed in his own words that he’s older and he was kind of ready and waiting for someone to come through and take over,” Wilson said. “When he heard that I worked here at school, that’s ideal, I think, as a coach for high school, to be on campus and available to the players.”

The decision to become head coach of the 25-member team was not an easy one for Wilson. She enjoys her job as a counselor at Lowell, and was concerned that assuming a larger role on the soccer team might mean less time talking to and advising her students. “It was definitely a hard decision because I love soccer and I’m super passionate about it, but I also really love counseling,” Wilson said. “And I’m a mom. I have two kids. It definitely takes a lot of time.”

In the end, seeing how responsible and talented the players on the team are swayed her to accept the position. However, juggling her obligations as head coach and an academic counselor are challenging, as she must leave her office during Block 8 to head to the field for practice. “I feel like I leave a lot here in my office and students that have 8th block off are often looking for me,” Wilson said. “But I try to make up for it by checking emails at home or weekends. Really, it’s just being available during the day for whenever people come by.”

When Wilson sat down for an interview with The Lowell in January, the soccer season was just getting underway, and Wilson and the team were still in the process of adjusting to her in the role of head coach. Aiming to make the transition as smooth as possible, Wilson has been relying on Vrana and other seasoned high school soccer coaches for counsel and support to help keep her grounded and face any challenges that come her way.

Senior co-captain and midfielder Camila Bodden says the transition involved with Vrana and Wilson swapping roles has been fairly seamless for the team, and that some positive outgrowths have emerged from the change, including Bodden and fellow senior co-captain and defender Fiona Plunkett assuming a stronger leadership role. “Partly because it’s her first year as head coach with this team and also her first year as head coach with any team, she’s more open to suggestions,” Bodden said. “She wants and needs to know what we think about what’s going on.”

Bodden and Plunkett also appreciate that Wilson has incorporated new conditioning drills, along with team-bonding activities, into the practice. “It’s been the same routine for the past three years, so it’s good to switch it up,” Plunkett said. “It’s good to see a new face, new drills.”

Wilson says she is including team-bonding activities with the aim of helping team members continue to grow and learn. “I think the biggest thing is to be inclusive as a team because a lot of teams can form groups really quickly,” Wilson said. “I keep telling the captains, let’s keep finding new players to warm up with and pass with, so that we become a stronger unit because 25 players is a lot.”

She is impressed with the talent, determination and work ethic of the girls on the team, which she thinks comes from their ability to handle the demands of an academically challenging school like Lowell. Recognizing the strength of the team, Wilson is excited to see how the season will unfold. “I want to see how it will unravel, how we do in the league, if we make it to NorCal and how we do at NorCal,” she said. “I’m just looking forward to seeing how it’s all going to work out.”