Scheduling Conflict: A difficult process has finally come to an end 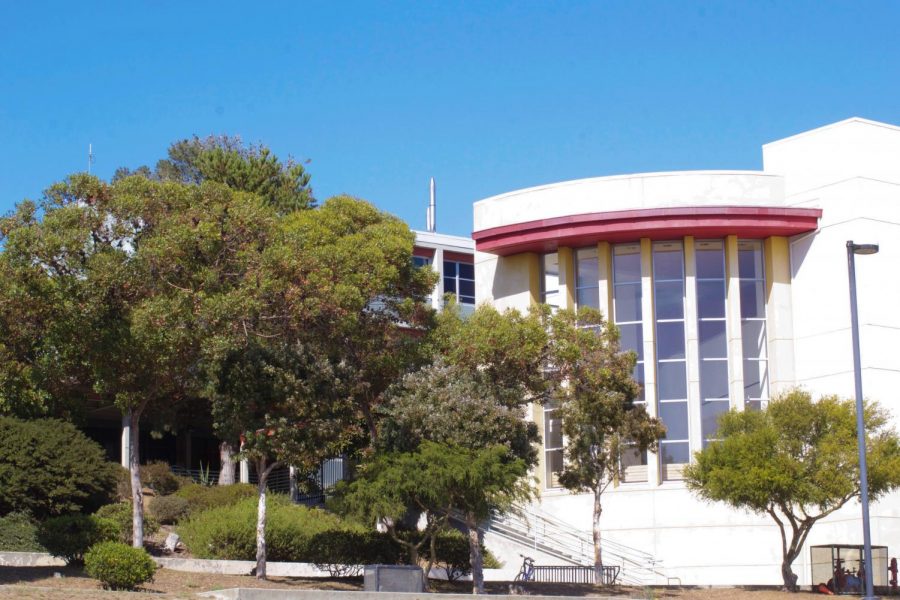 “This is the first time students at large were given an opportunity to give their recommendations and opinions on an administrative decision.”

The Student Body Council (SBC) wrote this statement after student input brought both confusion and clarity to the process behind developing what may be the final schedule change for the 2019-2020 school year.

After months of conflict, Principal Ishibashi has decided against implementing a block schedule next school year. He reported that a “modified block” schedule has now been sent to the school district for approval. This begs the question: how did we get to this point after the focus all along has been on an upcoming transition to a block schedule?

Ishibashi’s final decision was recent, but faculty discussions about changing Lowell’s bell schedule began over 12 years ago. Staff discourse brought forth no change until 2016, when teacher committees began drafting a potential block schedule for upcoming school years, according to Ishibashi. He reported that some staff members wanted a block schedule to lower student workloads, but that his personal focus was on alleviating student anxiety. “Every schedule we looked at had to do with stress relief,” he said. “It really isn’t about me or the administration. It’s about students.”

In 2017, Ishibashi supported a 2018-2019 block schedule implementation, but he reported that staff felt ill-prepared for the transition. To provide more time for discussion before making a major change, Ishibashi put into action this year’s neutral schedule. Although faculty members requested professional development courses to prepare teachers for longer blocks, such classes have not been offered. Instead of focusing on PD, Ishibashi has used this year to communicate with key groups, including staff, parents and students, to create what he thinks will be an effective bell schedule. 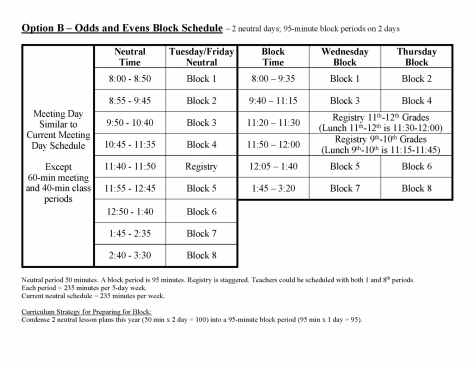 In November, teacher committees selected by Ishibashi developed two block schedule options, called “Option A: 3-Period to 2-Block Schedule” and “Option B: Odds and Evens Block Schedule.” The options were soon to become a campus-wide controversy.

On Dec. 3, Adee Horn, Lowell’s Peer Resources Coordinator, mediated “confidential discussions” between an estimated 200 students, including Critical Thinking and Social Change classes and groups of peer mentors. These groups, as well as Lowell Student Association (LSA) members, were given unreleased copies of the bell schedules to review during these discussions. The students wrote positive and negative commentary and submitted possible improvements to Ishibashi on response sheets.

Some of this feedback made its way into the final schedule. During discussions, peer mentors found that the schedule options did not offer enough time during registry to support Lowell’s Peer Mentoring program, which sends upperclassmen to freshmen registries at the start of every school year. On Dec. 14, the issue was addressed by writing modified versions of options A and B, which included extended registries and the removal of staggered lunches and registries to simplify supervision and lunch service, according to Science Department head Jonathan Fong.

While modifications were being made to Options A and B, sophomore Zephyr Anderson formed the Lowell Student Union, a student coalition, to challenge the two proposed schedules. They used social media as a platform to encourage students to email or call Principal Ishibashi “at least once a day” to express dissatisfaction. “I was getting feedback and hate emails from students on a daily basis,” Ishibashi said.

On Dec. 14, the LSU posted images of the unmodified, unreleased versions of schedule options A and B on Instagram, and opinions immediately flooded in. One student wrote, “This is some god-awful garbage,” and another called the schedules “horrific.” A senior commented, “The proposal is literally stripping Lowell of its identity.”

Five days later, department heads and senior staff members met and reviewed the schedules with Ishibashi. According to AP environmental sciences teacher Katherine Melvin, who chaired the meeting, the science department was unanimously in favor of a shift to a block schedule, but others were split. Math and world language department heads were concerned with the break in daily classes and other departments felt that the 70- to 90-minute block periods were incompatible with lecture-based teaching styles.

After Winter Break, faculty discussions reconvened with intensity, and Ishibashi’s goal of announcing a schedule on Jan. 1 was delayed to February. During a staff meeting on Jan. 7, a poll was taken by all teachers to determine preference between the two modified schedules. The environment was informal: the poll was taken via Kahoot and followed by Ishibashi performing a piano and vocal accompaniment to a recorded song that he said would help with the stressful situation, according to a number of teachers.

An anonymous teacher felt that the poll was rushed. “I was a bit taken aback by the staff meeting when Mr. Ishibashi projected one schedule, then projected another and said, ‘Okay everybody vote,’” the teacher said. “There really wasn’t time to talk about where this schedule came from or to understand what we were voting on.” Staff voted 60-40 in favor of the modified version of Option B.

On Jan. 11, the LSA emailed an opinions survey about the modified versions of schedule options A and B to the student body. The data revealed that the majority of students would like either no change to the schedule or a reversion to the B/C code bell schedule of the 2017-2018 school year.

SBC reported that the questionnaire received many more responses than other LSA surveys. “A change in the school schedule directly affects both teachers and students,” the SBC wrote in an email to the Lowell. “Thus, many students found it necessary to remain vocal and express their concerns and opinions on the proposed schedules.”

With teacher and student input collected and schedules modified to fit concerns, Ishibashi came to a final decision: neither modified schedule option would work. According to Horn, he retracted both schedules from consideration on Jan. 16.

There are multiple reasons why Ishibashi reconsidered the schedules. For one, according to anonymous staff members, excessive input had complicated the matter. “What I think [Ishibashi is] trying to do is keep asking questions until a schedule looks like it works for everybody,” an anonymous teacher said. “I don’t think that continuing to ask the question until you get a majority rule is necessarily the answer in this case.”

Ishibashi only partially agreed with the notion that an influx of opinions influenced his decision. “Those schedules, although very well intended, didn’t meet something that I would go down for,” he said. This is because the modified Option B did not fulfill his fundamental goal of guaranteeing central lunch blocks for students.

The upcoming schedule will force freshman, sophomore and junior classes to take a block off in the middle of the day. Ishibashi hopes that this change will relieve some student stress. “I think it’s going to change the culture here because kids are going to get to actually see each other and eat and have some downtime,” he said. 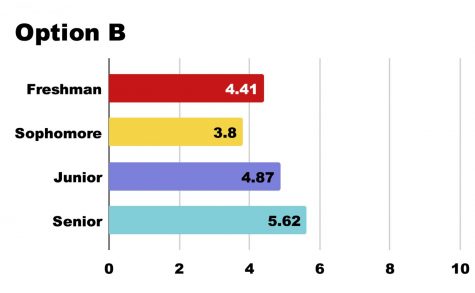 After block schedule options failed to make the cut, Ishibashi accepted what he calls a “modified block” schedule, which he says will be similar to past “mod” schedules.

On Feb. 6, while awaiting district approval from an SFUSD representative on a two-week break, Ishibashi confidentially emailed the final schedule decision to Lowell department heads to allow them time to create a master schedule. Apart from them, no students or staff, other than the teachers on development committees, have seen the schedule.

Being out of the loop has been frustrating for some teachers who interpreted Ishibashi’s silence as indecision. “Every time I ask Mr. Ishibashi [what the schedule is] I get a different story,” an anonymous teacher said in January. “He is driving me crazy because ultimately he has the right to make this decision and I want him to make it so I can start changing my curriculum.

Lowell Student Union wishes that the administration would have been open to student opinions and ideas from the start. “I just wish they would’ve been a little bit more transparent,” said sophomore representative Igor Bessa. “They could have taken in student suggestions for how they could reduce stress instead of planning schedules out before letting the students know.”

However, Ishibashi maintains that the amount of dialogue between him and students has been unprecedented compared to other schools. “Schools never share their bell schedules with students because it does cause a reaction,” Ishibashi said, “But I don’t care. I wanted to hear it. If I’m going to make a major change, I wanted student input.”

As long as students continue to criticize the schedules that were privately retracted, Ishibashi doesn’t mind the disapproval. “Sometimes I think [releasing schedules to peer groups] was a mistake, but I live with it,” Ishibashi said. “While we wait for [the final schedule’s] approval, I have to take the ownership of a lot of people thinking we are using one of those two schedules, and I am okay with that.”

Ishibashi knows that the schedule he will announce near the end of February may still receive criticism from students and teachers. However, he is willing to take it “for the greater good,” he said. “I can’t satisfy everybody, but it’s something that I can live with and will be proud of if it works.” If not, I take ownership and it’s okay.”