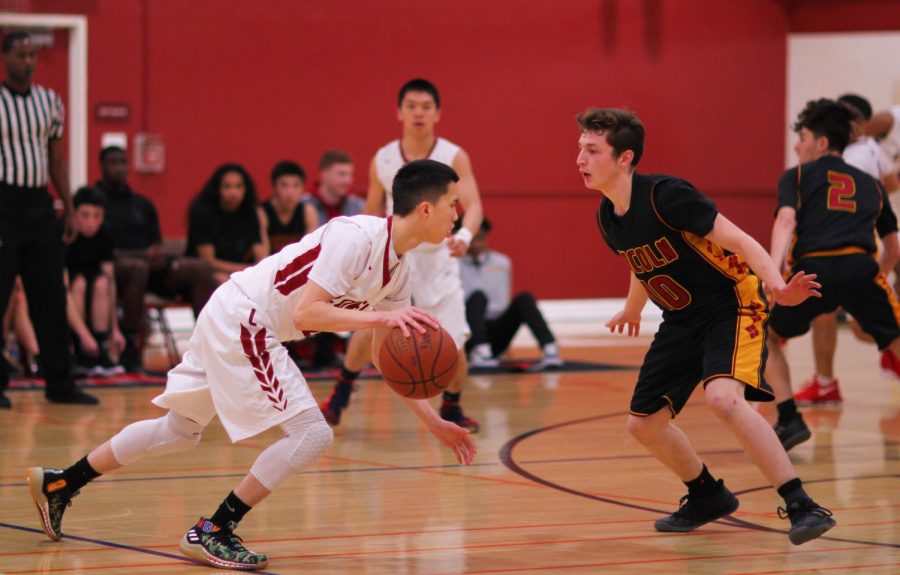 Senior forward Jace Ng seeks his chance to drive to the basket during the game against the Lincoln Mustangs on Friday, Jan. 25 at home.

The varsity boys basketball team lost 76-38 against the Lincoln Mustangs on Friday, Jan. 25 at home.

The first quarter opened with a series of dynamic and aggressive baskets, both teams maneuvering around one another and scoring to almost no opposition. The tide quickly turned against the Cards, however, as the Mustangs seized the ball and aggressively pushed for the Cards’ basket. The brutally fast and messy nature of such a blitz led to numerous unintentional fouls, which only added to Lincoln’s growing lead. The Cards did their best to contest the quarter, but in the end, it proved insufficient. The quarter ended at 21-9.

The second quarter began with a comeback from the Cards, who, through a quick series of free throws and baskets, narrowed the gap between the teams significantly. The barrage of baskets was relentless with both teams flagging as they dashed from one side of the gym to the other. Lincoln pulled ahead once again, exploiting Lowell’s fatigue to exchange their previous flurry of free throws for a succession of scores into the Cards’ basket. In the latter half of the quarter, the Cards barely scored a point. The second quarter finally concluded at 43-21.

The third quarter started off with a lightning-fast three-pointer by the Mustangs, which led into yet another streak, as the Mustangs continued their onslaught and took advantage of the unintentional fouls that occurred. While initially battered by this assault, the Cards’ team began to come back together and contest the Mustangs’ lead. Both junior forward Griffon Shen and senior forward Andrew Ren made baskets in Lowell’s comeback effort, as did junior forward Rishi Raghavan, who deftly slung the ball around the outstretched arms of the Mustangs clustering around the basket. This rally, however, was not enough to turn the tide for the Cards. The third quarter ended at 60-31.

Moving into the fourth quarter, the Cards’ prospects looked grim. They were behind by nearly 30 points, and their best efforts had made only a small difference. The Mustangs moved with the same speed they had throughout the match and again leaped into a scoring streak. Though senior forward Jace Ng did make a basket during this time, Lincoln’s lead continued to snowball. Near the end, senior guard Darren Loo made a last-minute score, but the fourth quarter ended at 76-38.

Though he applauded his team’s energy, head coach Lavdiotis saw much room for improvement. “I think we showed some energy… Joshua and Griffon especially,” Lavdiotis said. “[But] we were way out of our gaps on defense…we can play better defense on the half-court, better man defense… and we can work like we did yesterday… on finishing at the rim.”

The Cards will participate in the playoffs on Thurs., Feb. 14.