Students who give back: Lowell’s zoologists 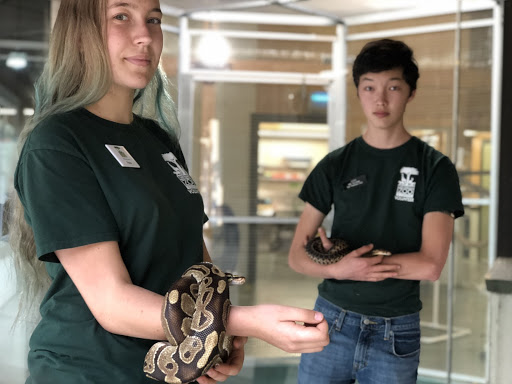 In the last four years, Junior Rita Marsh has spent over 700 hours at the San Francisco Zoo.

No, Marsh is not a loyal visitor; she has been working behind the scenes with exotic animals for all of her teenage years.

Marsh has volunteered in various programs at the zoo since she was 12 years old. Beginning as a “Nature Trailer” in the SF Zoo’s Nature Trail program, she spent her summers on a dirt path in the heart of the zoo talking to visitors about the creatures of the Animal Resource Center.

This program appealed to a young Marsh, who grew up without pets and invested her time into learning about animals. “I had dozens of books that I knew cover-to-cover, big chapter books, just facts about animals,” she said. “I was such a nerd; I still am. I still have them and I still know a lot of random stuff about animals, but I’m glad that I do.”

After three summers on the Nature Trail, Marsh transitioned to the Junior Zoologist program. This change was a shock to Marsh. “It was really scary, actually,” she laughed, “Nature Trail was really chill, but being a JZ is like everything else.”

For Marsh, “everything else” involves maintaining the tightly timetabled mechanics of the zoo’s Animal Resource Center, a building next to the zoo’s family farm where behind-the-scenes animals roam. These critters include reptiles like legless lizards (not snakes), mammals like porcupines  and amphibians like western toads.

In the ARC, Marsh and other volunteers take on the roles of traditional zoologists. They clean animal enclosures, craft behavioral enrichment (stimuli for animals such as cardboard boxes-turned-hideaways), exercise animals, prepare and distribute diets, and, over the summer, supervise the Nature Trail. The volunteers work in seven different sections located in the two intersecting halls of the ARC.

Volunteers like Marsh work to keep the ARC’s animals safe and healthy, so their tasks in each section range from scrubbing the floors and squeegeeing the windows to making salads for turtles.

Occasionally, volunteers will be assigned various “projects” by adult staff to make sure the building is in its best condition. “There was the [project] when we pulled out all of the gutters and all of these spiders came out,” Marsh said. “I don’t really get shocked by that much anymore.”

According to Marsh, the results of her work inspire her to keep volunteering. “The animals get taken care of and they all live another day,” she said, “It’s rewarding: I get to hang out with people and animals that I like; therefore, I want to continue working.”

Marsh isn’t the only Lowell student who currently volunteers as a Junior Zoologist. Seniors Joshua Kay and Rory Schmidt have been working in the Junior Zoologist program since the summer of 2017 and the school year of 2017-2018, respectively.  Together, they have worked over 1,600 hours for the ARC, including their hours on the Nature Trail, a prerequisite program to become a JZ.

One of Kay’s favorite moments as a volunteer was a few weeks ago, when he became an attraction at the ARC. For an hour, visitors watched as Kay handled a party of chinchillas behind the floor-to-ceiling windows of the front of the ARC. Another volunteer out front was teaching visitors about chinchillas, which are bred in captivity but are endangered in the wild.

Conservation education is one aspect of the program that Schmidt values. “We try to emphasize whole stations dedicated to conservation on Nature Trail,” Schmidt said.  “We want to be pushing the environmental aspect of it because, as a zoo, that’s part of our core message.”

The Junior Zoologist program includes “Hawk Talk” and “Animal Encounter,” two activities that aim to broaden the knowledge of visitors about the ARC’s animals, according to Marsh. During Hawk Talk, volunteers are stationed by the enclosures of birds of prey to present facts about them to the public. In Animal Encounter, volunteers handle the ARC’s animals on a hill in front of the ARC, where they present about the biology and conservation of their creatures. “We go out with animals and tell the public, ‘This is how this animal lives, this is how its dying, this is how you can fix it,’” Marsh said.

Kay and Schmidt also appreciate the time they spend with the ARC’s animals. Schmidt’s favorite animal to handle was Judd the greater Madagascar hedgehog tenrec, which died several months ago from old age. Schmidt remembers handling the tenrec, a spiky species native to the Madagascar and not related to hedgehogs, who had a habit of biting the thickly gloved fingers of volunteers.

Kay loves working with Frida, a three banded armadillo “with a backstory which will probably make you cry,” according to Kay. Frida has lived past her life expectancy of 17 years, and also lived through the deaths of her mate, Diego Rivera, and their child, Kahlo.

Like Frida, Schmidt, Kay, and Marsh will be sticking around at the zoo. They plan on volunteering until they leave for college; until then, seniors Kay and Schmidt are determining their futures. “I know more about animals so I think that that influenced what I want to do beyond high school,” Kay said. “I want to work more on equitable access to wildlife and wilderness in general.” Kay eventually wants to study law and environmental policy.

For some volunteers, involvement at the zoo lasts long after high school ends. Lowell class of 2013 alumna Sydnie Lau volunteered and worked for the zoo for nine years before leaving this past summer to attend a veterinary school in Oregon. She has held leadership positions in both zoo youth programs that she grew up in.

Lau joined the Nature Trail program as a twelve-year-old and made the same transition as Marsh, Kay, and Schmidt did into the Junior Zoologist program. As a high schooler, Lau often worked 7.5-hour-long shifts multiple times a week while juggling her responsibilities at Lowell.

Lau was hired as the Nature Trail paid intern in 2014, and continued to volunteer in the ARC and other programs such as ZooMobile, one of the zoo’s outreach programs which brings animals to SFUSD schools, until this past summer, when she worked as the ARC’s one-year-intern.

In these internship positions, Lau was responsible for the management and supervision of animals and youth volunteers. As the ARC intern, she worked behind the scenes to train animals, ensure safety of animal enclosures, and maintain the ARC.

For the past nine years, the San Francisco Zoo has watched Lau grow older and find her passions. “When I began volunteering at the zoo in 2008, I had no idea what I wanted as a career,” said Lau. “The zoo gave me the opportunity to ‘discover’ myself in a way: not only to work with animals, but also allowing me to discover that I also enjoy working with people.”

Lau plans to continue her involvement at the zoo in the future, and deeply believes in the zoo’s conservation and youth programs. “I want to work with zoos who are participating in conservation efforts and those who give opportunities to youth so that they can have similar lucky experiences to work with animals like I did,” Lau said.

Lowell is full of volunteers who have traced and retraced the dirt paths of the San Francisco Zoo. These experiences are impressed in their minds and worn into their uniforms; they won’t be washed away, literally and metaphorically. “There’s a pretty good chance that in your classes, there’s somebody who works at the zoo,” Schmidt said. “Do not touch their jeans.”