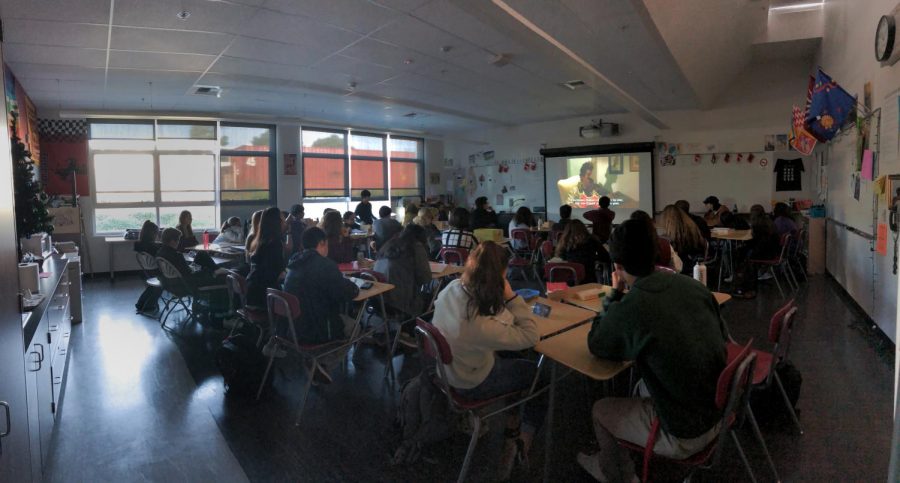 “I didn’t understand how all of the people who would want to take AP Spanish Language and Culture would fit into one class,” sophomore Lilli Eller said, recalling the moment her Spanish 3 teacher, Carole Cadoppi, announced last spring that the number of AP Spanish classes had been reduced from two classes to one class.

In the fall semester, advanced language classes were significantly reduced, according to language department head John Raya. Some of the biggest changes included cutting the number of AP Spanish classes from two to a single class, combining Italian 3 and Italian 3 Honors, and cutting AP Italian and AP Latin. In addition to the changes to the advanced languages, the two French 1 classes were combined into one.

According to Raya, these changes were due to decreasing enrollment in higher level classes and increasing enrollment in lower level classes. “It wasn’t a problem of budget or anything, it was just a matter of logistics,” Raya said. The department was ready to offer higher level classes such as Spanish 4 Honors, AP Latin and AP Italian, according to Raya. However, less than 12 students signed up for each course, and some had as few as three, so they were cut. Thirty three students signed up for AP Spanish, too small a number to split into two classes but larger than language class sizes in previous years, so the two classes were combined. Also, with the rise in popularity of San Francisco Unified School District’s Spanish immersion program, a system where students are taught multiple subjects in Spanish starting in kindergarten, more and more students were coming into high school beyond Spanish 1 level. This meant they were entering high school enrolling in Spanish 2 and 3, inflating those levels. More teachers were needed to teach those classes instead of the upper levels. This contributed to the cuts as well.

Many students were against these changes. “It definitely made it harder to work around the fixed block,” Eller said. Since there was only one AP Spanish class, Eller had to reserve that block, which limited her options regarding the other classes she wanted to take. Not only did students like Eller have to reserve blocks in order to fit their language class into their schedule, but they also have to deal with the daily trials of a very large class. The number of students in one class can well exceed 30 students due to the changes made. According to Eller, the struggles range from not being able to hear the teacher to having to navigate around the 40 desks stuffed into a single classroom.

Chiara Pelagatti, as the sole Italian teacher, also recognizes the damage the cuts are causing to the progress and learning of students. “Language classes are made to practice and to talk, so the more students are in a classroom, the less practice can be done,” Pelagatti said. Furthermore, the combination of an Italian 3 class and Italian 3 Honors class has proved to be difficult. “The level is very different,” Pelagatti said. “It’s hard to take care of students that need more practice [and] students that are more advanced.” According to Pelagatti, the ideal language class size is 20 to 25 students. This class size allows each student to have a chance to practice speaking in class and it allows the teacher to individually assist everyone.

With the new semester just starting, many students like Eller who are taking advanced language classes are anticipating some of the same struggles they experienced last semester. They are hoping the language department will add more classes.