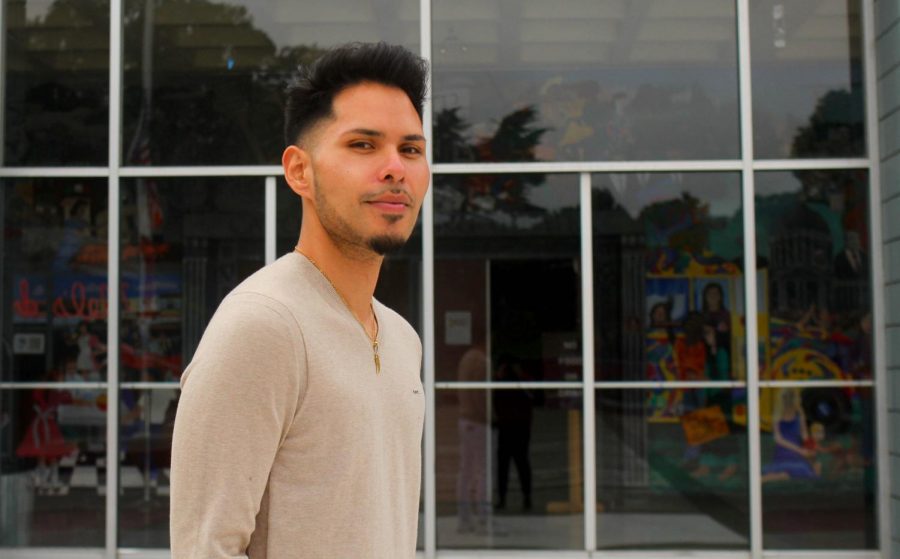 The hardest part about Lowell High School special education teacher Stephen Torres Esquer’s job isn’t working with his students, it’s educating others who don’t understand and respect people with disabilities. Although the people who don’t want to hear his message are the most difficult to talk to, they are the ones Torres Esquer is trying hardest to reach.

Torres Esquer is the Region 4 recipient of the 2018-2019 California Educator of the Year Award.

A passionate and driven advocate for inclusion, Torres Esquer has spent his whole teaching career not only educating his students, but educating others on how to treat and respect people with disabilities. “My students have taught me to be brave, because different is so often perceived as wrong, funny, annoying, or even disgusting, and it takes a brave soul to stand tall in the face of prejudice and mockery,” Torres Esquer said in the speech he gave at the California Educator of the Year Awards Dinner. “It has helped me to be patient not because it takes patience to work with special needs, but it takes patience to educate the rest of the world.”

Principal Andrew Ishibashi says that he nominated Torres Esquer because of his ability to bring out the best in students. “They may be institutionalized, they might be in a facility for the rest of their lives, but what he has done for them is built their self-esteem and told them that they’re special,” he said. Since Torres Esquer started teaching at Lowell, Ishibashi has been amazed by Torres Esquer’s willingness to go beyond what is normally expected of a teacher. “When I see a teacher that dances with a student every day to get him on the bus, that’s just phenomenal,” Ishibashi said. A frequent visitor to Torres Esquer’s class, he has always been especially impressed by Torres Esquer’s disability advocacy group, called The Direction, which started off as a lesson and classroom exercise about the 1960 civil rights movements but became an advocacy group when Torres Esquer realized that the fight for representation and equality was not over.

The Direction’s goal is to shift the way people perceive disability, and since its creation in 2015, it has quickly expanded far beyond Lowell classrooms to festivals, schools and community meetings all over San Francisco. Torres Esquer emphasizes that he and his group are willing to speak anywhere because they believe that everyone with access to their information counts. “I will take any microphone that they’ll give me and I will stand at any stage that they allow me to stand on,” he said. Although not all of Torres Esquer’s student have speaking roles during his presentations, they are all equally important to the group, which include anything from photography or distributing flyers to being on stage and speaking to the crowd.

This is Torres Esquer’s fourth year teaching special education at Lowell. Previously, he taught at Thomas Edison Charter Academy for one year and interned for three years at another school. Although Torres Esquer says that he doesn’t have a “super personal story” that influenced him to pursue special education, he has always wanted to help people, especially the “underdogs.” “I just felt that this population was so underserved,” he said. “They’re so often behind, disregarded, forgotten, excluded and it just seemed like one of the most meaningful ways to contribute to the world.”

A common misconception about the special education system is that special education teachers are little more than babysitters, a notion Torres Esquer fiercely denies. “I hit the ground running when I get here and I don’t stop running until I leave,” he said, describing his busy schedule. He works seven blocks straight in a day with no lunch break, a thought unbearable to many general education teachers but necessary for Torres Esquer’s students. His typical day at Lowell starts off with his students learning functional academics, which have an emphasis on life skills such as money management, writing emails and resumes, and filling out paperwork. The rest of the day is used to practice life skills in real life situations, with Torres Esquer and the other special education teachers accompanying students off campus to buy groceries, take public transportation, and do volunteer work.

However, it wasn’t easy for Torres Esquer to develop his curriculum, which is now well-known among many San Francisco schools. He remembers the first day he was introduced to his classroom, which was comprised of a pile of boxes in the middle of the room, during the summer. He felt overwhelmed, and to make things even more difficult, unlike general education teachers, he didn’t receive a curriculum to base his lessons on. “I told myself, ‘I will stay here until 9:00 p.m.,’, he said, referencing his first day teaching at Lowell, “And I’m going to create systems, I’m going to create curriculum, and I’m going to create a structure so that next year I never have to stay late again.” Almost every weekday he worked until 9 or 10 p.m., and on weekends, devoted countless hours to create his program. In fact, everything he currently teaches, from the many books and curriculum he has written to his website, which contains invaluable resources and lesson plans available to anyone, was entirely created from scratch, a feat he describes as “insane,” but in the eyes of the students and staff who understand the impact of his work, is equally admirable.

What Torres Esquer has created is a “self sustaining system” that is not only implemented at Lowell, but across many San Francisco schools, and is also available and mostly free online to anyone. His website, which features a blog and links to The Direction’s website, his social media accounts, YouTube series, and children’s book series, have also become popular because of their unique and unconventional integration of pop culture. Torres Esquer makes content in the style of pop stars and social media influencers so that disability “can have a seat at the Hollywood table,” which, according to Torres Esquer, is important because society is primarily focused on entertainment. Instead of wearing slacks and giving lectures, he’s posing in ripped jeans and using memes and GIFs to spread his message of inclusivity in a way that is more accessible to a younger audience.

What is even more surprising is the fact that Torres Esquer had no prior experience to creating any of his advocacy platforms. Before he became a special education teacher, he wasn’t a public speaker, business manager, cinematographer, or writer. But in a way, he is all of those, and most importantly, he is using all of those roles to educate people about disabilities. He simply had the motivation, and according to Torres Esquer, a love of organization that enabled him to “make dreams come true.” His ultimate goal is to change the way society perceives disability, and believes that once that can be achieved, systems and laws will change.

Torres Esquer loves the idea of being an innovator or visionary. “Just like these big billionaires are selling products and services, I’m selling the idea that we all need to be more inclusive and we all need to be more aware and educated,” he said. “I’m selling the idea that all people are people and all people deserve to be respected and loved and included in the communities that we create.” Torres Esquer wants to change the culture and systems to make people with disabilities a priority, not a burden. His project may have started at Lowell, but he plans to reach everyone on every platform he can use. “I don’t know what it is I’m going to do [next], but I just know that I’m never going to stop,” he said. “I will continue to advocate, educate, innovate and inspire, as far as I can as and as long as I can.”