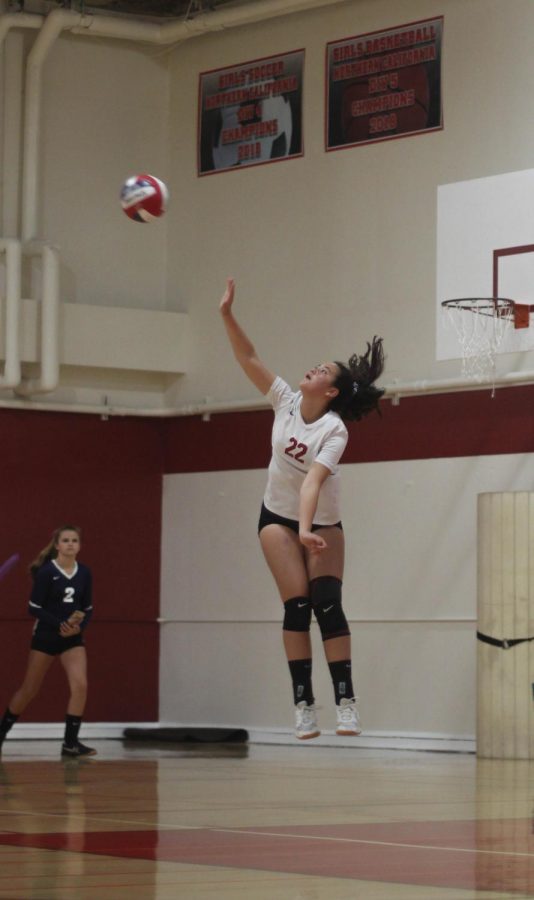 Freshman Kailaini Wang takes a high jump and spikes aggressively at the Academy Wolves on Oct. 5.

The Cardinals began the first set with an ace from server sophomore co-captain Gabriella Quach. A few minutes into the set, the Wolves caught up and the two teams were locked in a tie. As soon as freshman right-side hitter Kelsey Ma spiked the ball over the net, the tie was broken. The Cardinals maintained their lead and scored consecutive points until it reached 20-9. When the Cards were five points away from winning the first set, freshman outside hitter Eliana Brown attacked at the Wolves’ undefended midcourt with a precise serve. With an aggressive spike from freshman outside hitter Heather Liu, the set ended with a 25-9 victory.

The Cardinals dominated the court as early as the second set began. Ma’s consecutive serves put the Cards on an early lead of 4-0 until the Wolves caught up and set the score at 5-2. The Cardinals immediately gained their lead back with sophomore co-captain Mikayla Ng’s attacks at the Wolves’ lightly defended midcourt. Soon, the Cards settled into a momentum of serving, setting and spiking consistently as a team. Within 15 minutes, the Cardinals were able to take complete control over the court and finished the set 25-5.

The Cardinals’ next game is against the Galileo Lions at 4:00 p.m. on Friday, Oct. 19 at Galileo.