Promposals are cute, but proceed with caution 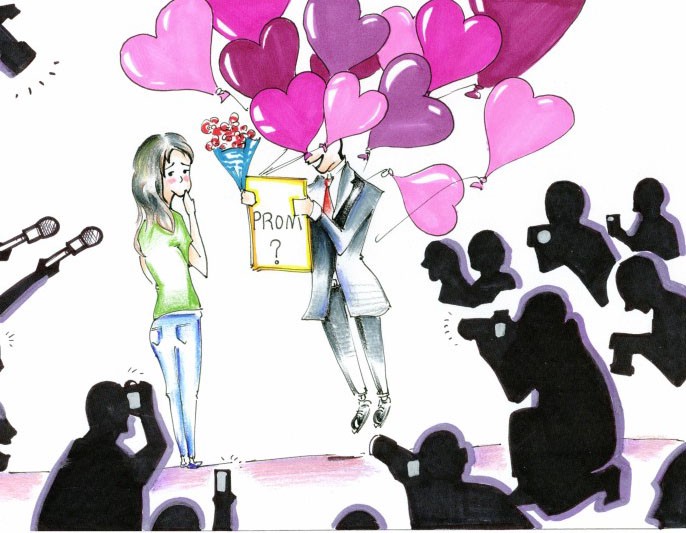 Squeals emitting from the surrounding tables cause you to stop glaring down woefully at your lunch to see what all the fuss is about. There’s an army of balloons that puts Mr. Fredricksen’s house from Up to shame approaching a nearby table. It’s another promposal — probably the second one you’ve witnessed on this day alone.

Having that person you’ve been pining over for the last month and a half shove a dozen roses in your face is what dreams are made of.

Many people love a good promposal. Some people love them so much that they spend a third of their prom budget — an average of $342 of their $919 budget for West Coast promgoers, according to a recent study by Visa — on some elaborate way of asking their date to the dance. Having that person you’ve been pining over for the last month and a half shove a dozen roses in your face is what dreams are made of.

Or maybe you’re just in it for the free prom tickets. The Lowell High School Junior and Senior Prom Committees once again held their annual contest in which the most outlandish promposal wins free tickets to prom. This year’s winners were juniors Bruno Montes and Maggie Wu. Montes planned a scavenger hunt around Lowell’s campus that ended with Montes promposing to Wu at the football field.

If you are thinking of asking someone to prom, I’ve got a few suggestions of what not to do. If you’re willing to pick a fight with People for the Ethical Treatment of Animals (PETA), you could use an animal to aid you in your selfish endeavors like a high schooler in Milton, Alabama did recently. Jacob Michels stole a goat from a neighbor, only to ask his potential date, “Will you goat with me to prom?” However, his attempt at romance resulted in his arrest. Or if goats and puns aren’t your thing, ride into school on a horse. At least that’s what a Milpitas High School student tried, and was subsequently suspended for.

Promposals tend to impose stress on the person being asked no matter the situation.

These promposals gone wrong are perfect examples that grandeur with a dash of farm animals does not guarantee a definite “yes.”

But sometimes a well thought-out gesture could land you a success. Our very own junior Thien Tran asked junior Vicky Feng to prom by rounding up a few of Lowell’s choir members and having them serenade his prospective date with a rendition of the Little Mermaid’s “Kiss the Girl.”

Although a surprise attack promposal would put strain on most people, Feng was informed about the Disney-themed promposal beforehand but still found herself under stress. “People kept saying that someone would ask me sometime during the week and I was so paranoid about when it would happen,” Feng said. Wu admits that promposals can be a little awkward. “When you watch videos of promposals you think, ‘That’s really cute.’ But when you you’re being filmed it’s actually more awkward.”

“I didn’t want to say no in front of everyone.”

Promposals can ruin friendships. Imagine minding your own business in class when suddenly your friend and a gaggle of their cronies barge in. They ask you to prom in front of your entire class and you’re torn between rejecting their offer and saying yes just to save them the embarrassment. A senior, who’d like to remain anonymous for obvious reasons, found herself in this predicament last year. “I didn’t want to say no in front of everyone,” she said. “So I talked to him the next day and told him that I didn’t want to go with him. Now I kind of regret it because the entire thing ruined our friendship.”

Promposals are cute, but proceed with caution. If it’s absolutely necessary for you to profess your burning desire to go to prom with a certain someone, it would probably be better to plan the entire thing out with them and make sure you get the A-OK. Sure, the element of surprise is all but destroyed, but that’s much better than risking the chance of emotionally traumatizing your date for the rest of eternity.