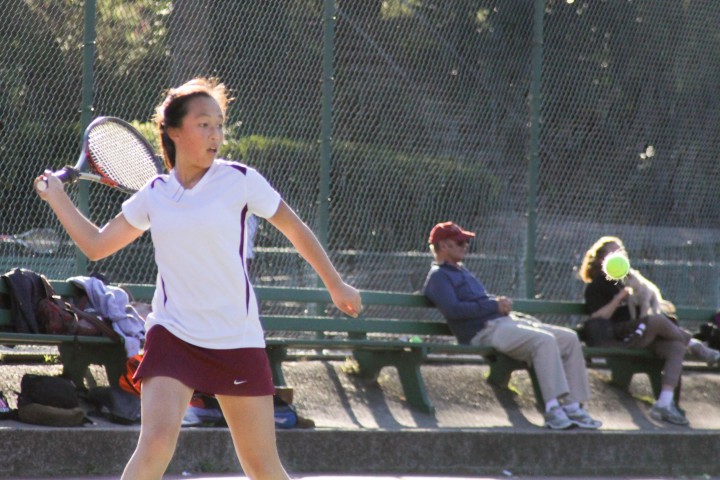 Sophomore Bernice Zhu readies to hit the ball in her match in the All-City semifinals on Nov. 4. Photo by Aida Irving

For the 17th consecutive time since 1998, the girls’ tennis team secured gold, holding onto its position as the reigning champions of the San Francisco Academic Athletic Association.

“Movement has been a key focus since the beginning of our season and I feel that it has transitioned into the girls’ gameplay smoothly.”

The Cardinals defeated the Lincoln Mustangs 5–2 on Nov. 7, clinching the first, second and third place spot in doubles play. In addition to leading the doubles matches, the team also dominated in singles on Oct. 27, with sophomore Kristine Pau claiming first, followed by senior co-captain Sabrina On picking up silver.

All of the team’s goals for the season were met and implemented into their gameplay. “Movement has been a key focus since the beginning of our season and I feel that it has transitioned into the girls’ gameplay smoothly,” assistant coach John Mohr said. “They have also become much better at playing mentally and they’ve learned to use their smarts to position themselves properly.”

The Cardinals went undefeated 6–0 within the league and 9–3 overall. 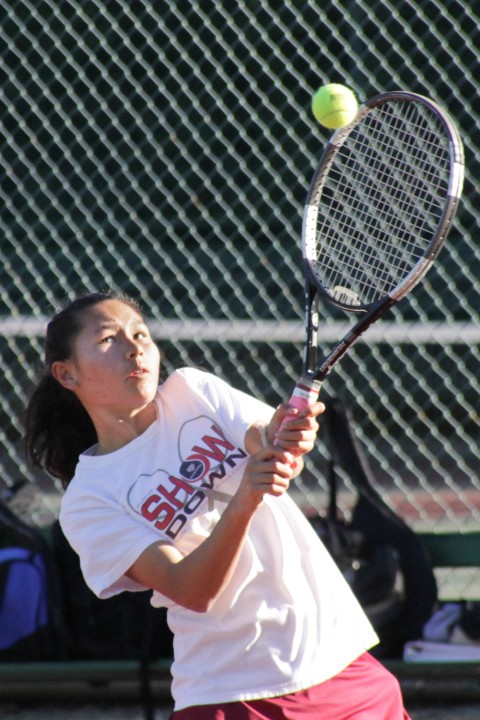 Sweeping its competition at All-City on Oct. 27 and Nov. 7, the girls’ tennis team made its mark on the courts.

In doubles play, the Cardinals claimed seven of the eight quarter-final spots, with the final spot taken by the Mustangs. “The girls’ play styles compliment each other’s so they perform well together,” Mohr said. “There’s always positive vibe when they play.”

“The girls’ play styles compliment each other’s so they perform well together.”

First place doubles partners junior Rebecca Chen and senior Ashley Duong sailed through their matches, leaving the courts without dropping a single set. Sophomore Sandi Dumas and senior co-captain Julia Tien took second, followed by junior Camilia Kacimi and senior Suzanna Tom who fought off Lincoln for the third place spot. The Lowell has selected senior Sabrina On as the Most Valuable Player. Completing the season with an undefeated record, On only lost one match this year, which was against St. Ignatius. Since the start of the season, On grew as a player mentally and physically. “Sabrina has worked very hard on every aspect of her game,” Mohr said. “Her movement on court has improved as w ell as her ball placement.”

To her teammates, On is a positive role model who the players can look to for advice. “She’s our go-to person and the main voice of the team,” Duong said. “She’s super friendly and helpful, on and off the court. She sends us reminders for matches and forms and she’s always available to talk if we need her.”

On fills the role of a co-captain exceptionally, according to Mohr. “She battles on the court until the final shot,” Mohr said. “I truly like the effort that Sabrina brings to practice and the leadership she exhibits. She is a coach’s dream in that she will request particulars that the team needs to work on, and she is always right.”